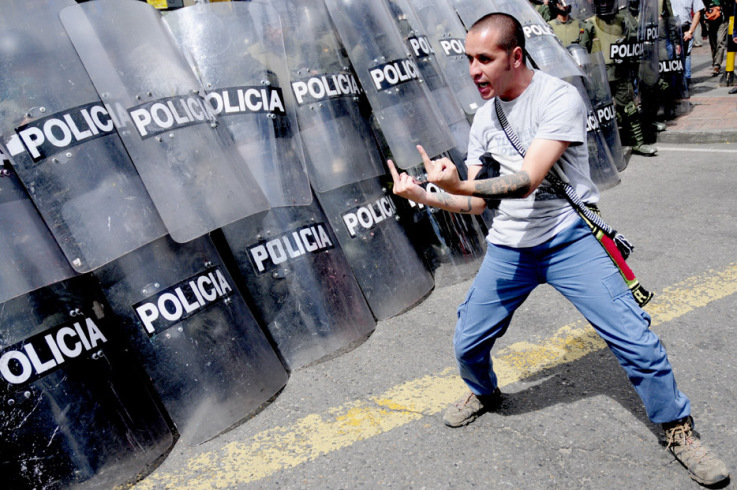 Using some fictitious examples the Daily Beast comprised some basic law enforcement interactions that would lead people to say “fuck the police” after witnessing, or worse being subjugated to, the injustice yourself.

The only problem is the examples given aren’t so much fiction as they are, everyday life for police in America. The original article is a couple years old, but even after reading it for the first time it wasn’t hard to relate similar instances of police abuse.

*Text in blockquotes was originally published at thedailybeast.com*

A woman with advanced dementia walks down the street in her bathrobe, her adult son, who is black, follows close behind her, desperately trying to get his mother back in the house.

The police car arrives and aggressively questions the old woman. Bewildered by their inquiry, she tells them she doesn’t have a son. The officers slam the grown man to the ground.

This may seem like a stretch to you but cops aren’t trained to handle mental health situations, they are however trained to escalate situations and use force to maintain control. When they involve themselves in situations they are not prepared to handle, people get hurt or die.

Iole Pasquale, an 80 year old woman with dementia, was tasered by the police, after she was discovered wandering with a knife. She fell and broke her hip as a result of the taser.

Freddy Centeno was having a mental health breakdown when two Fresno police officers killed him.

As you can see, they didn’t even try to understand the situation before they pulled the trigger. Freddy’s life could have been spared, but poor training and a lack of discipline led to his demise.

Two officers, their badge numbers covered by black tape, watch as guests disperse from a house party they have recently disrupted. A woman who is black theorizes out loud about the size of their genitals.

They tell her to put her hands behind her back.

They wrestle her to the ground when she refuses.

In the back of their patrol car, with her hands cuffed behind her, she mocks their cowardice. They pepper spray her at point blank range through the window of the vehicle then wait outside until the gas has dissipated enough for them to safely re-enter.

She is nineteen years old.

Again this may seem like an extreme situation or something that a “bad apple” may do once in awhile, but false arrests and brutality are a daily occurrence in law enforcement culture. The late Adam Rupeka was pepper sprayed for flipping off a cop and then abused behind closed doors at the police station. He was paid a settlement and the officer was fired for his actions.

The famous Berkeley incident where John Pike casually pepper sprayed a group of protesters went viral and in a bizarre turn of events led to Pike being fired after eight months of paid leave. He was later awarded nearly $40,000.  Talk about privilege and an environment that not only promotes senseless aggression, but even rewards you for it.

A detective drives through dark city streets and stops at a traffic light.

A group of young men, who are black, walk past.

For the crime of crossing the street inside a crosswalk, the detective says to the assistant district attorney in the passenger seat, “Look at these hooligans. They must be up to no good.”

The heinous crime of jaywalking has led to multiple arrests and violent beat downs suffered at the hands of law enforcement officers. Amanda, who was exercising with headphones in Austin, TX, was assaulted by police after crossing the street outside of the crosswalk. When talking about the officer’s actions the police chief, Art Acevedo, said she was lucky that she wasn’t raped.

His exact words were, “Cops are actually committing sexual assaults on duty, so I thank God that this is what passes for a controversy in Austin, Texas.”

In Stockton, Ca a teenager was the victim of a brutal assault after crossing the street. One officer was attacking the teen, who is curled in a ball, his backup arrived, and nine officers proceeded to drag the teen into the road and beat him with batons.

Two teenage boys walk in the street of Ferguson, Missouri, on a summer day.

At high noon, a patrol car pulls up and the officer at the wheel tells them to get on the sidewalk.

Their refusal leads the officer to shoot one of the boys to death.

This short story in the most outlandish of them all and makes your blood boil to think about a police officer killing a teenager for nothing other than where he was walking. However in Gardena, CA police officers shot two people riding home on bicycles. The officers mistook them for bike thieves and shot them because they feared one of them had a weapon.

While every example provided is a great reason to say “fuck the police“. The everyday tyrannies should not be overlooked either. The cop that gave you a speeding ticket, fuck him too, he isn’t keeping anyone safe; only preying on those who drive at a speed disagreed upon. The cops who harassed you for smoking a joint in your park, they can get fucked, too. Crimes require victims and targeting individuals who ingest substances that others disagree with does nothing for the well being of the population and only creates more criminals.

The officers in these videos were just doing their jobs and the people who were hurt and killed are the result of fantastic police work. When these are the results of doing your job, maybe that job shouldn’t exist and you’re an asshole for doing it.