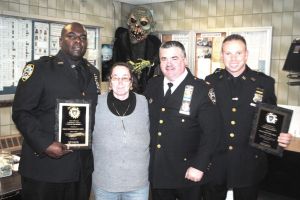 A 16-year veteran of the NYPD has been arrested on domestic abuse charges. Police officer Richard Phipps, 42, was arrested Saturday and charged with assaulting and choking his wife in front of their child. If assaulting the wife wasn’t enough, Officer Phipps also assaulted his teenager daughter when she tried protecting her mother.

According to police, the violent officer shoved the young girl when she tried to stop the beating.

Just three years ago, Officer Phipps was named as “Cop of the Month” after arresting an armed burglar in 2013.

Also arraigned on Saturday, in an unrelated incident, was NYPD Traffic Agent Keith Jenson. Keith Jenson, 32, violated an order of protection filed by his girlfriend when he confronted her at her home. The order of protection was granted after he previously assaulted and choked her in 2015.  According to police, “The woman did not lose consciousness when he choked her and refused medical attention”. He was charged with assault, harassment and criminal contempt.

Honestly, I wonder how an officer like Keith Jenson could possibly still be employed by the NYPD AFTER assaulting and choking his girlfriend, and then violating a restraining order? I guess the “Thin Blue Line” also refers to the black and blue bruises they leave on loved-ones?

Unfortunately, anyone willing to do a simple Google search can see this type of behavior happens far too often. Case-in-point, it was less than a week ago, that Asa J posted a story (and video – see below) of a NYPD Officer choking a woman on the street. So with that in  mind, are these cops the so-called “Bad Apples”, or do they represent the norm for the NYPD? Let me know your opinion in the comments below.