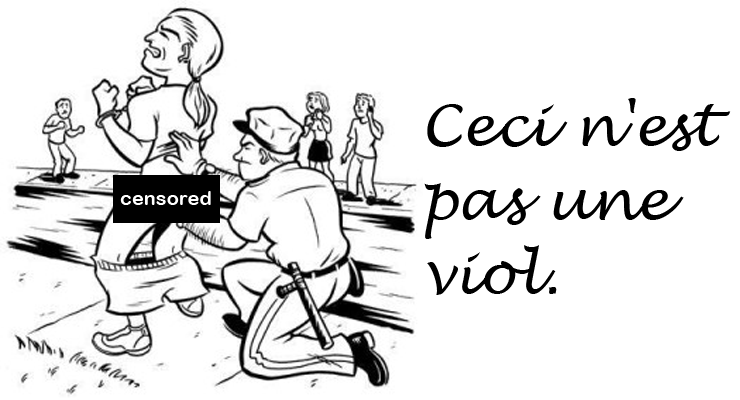 This is the second article in a series on how the “War on Drugs” is state-sanctioned theft, rape, murder, and class warfare. Read Part ONE, “Theft” here.

The Department of Justice defines sexual assault as “any type of sexual contact or behavior that occurs without the explicit consent of the recipient.”

If you have been following Cop Block for any length of time, you have probably come across the concept of self-ownership, the idea that you have, or should have, complete autonomy over your own person. Treating people as state property who should not be allowed to make adult decisions about what they do with their bodies, such as taking drugs or not, violates this concept. However, the Drug War also literally violates our bodies by subjecting them to invasive searches and procedures with the goal of finding and confiscating illegal drugs.

Under any other circumstances, nonconsensual groping of other people’s private parts is a vile, criminal activity, but slap a magic suit and badge on the perp, and suddenly it’s a public service. Cop apologists are morally bankrupt, unquestioning authority junkies, but it still boggles the mind that anyone, even they, can defend this loathsome practice. It’s also astounding that more people do not connect the dots between a profession that actively trains people to commit sexual assault and codifies it as an expected duty, and the high rate of sexual offenses committed by the people in that profession. Does law enforcement attract sickos inclined to commit sexual assault, or does it merely normalize it for those conditioned to commit it as a part of their ordinary activities? Both?

Pathetic dopes and mental defectives rationalize that police violating our bodies is justified by the off-chance that they might find contraband, but what is the bar here? What is the cut off for unacceptable levels of groundless sexual assault? Is it acceptable for 50% of the people law enforcement subjects to these disgusting and humiliating cavity searches to not have any illegal substances on them? Is anyone tracking how many times cops are doing this, and the outcome? Seeing how no government agency is even tracking how many people cops kill each year, it’s doubtful one is definitively tracking how many they grope, and the outcomes.

We do have some statistics courtesy of Radley Balko:

Studies and surveys at the time [1930] showed that 80-85 percent of women similarly detained or subjected to body cavity searches turned out to be innocent. By the end of the decade, a New York Times survey of suspected drug mules subjected to x-rays or forced defecation found that in Miami, agents searched 101 people, and found drugs on 67 of them. In New York, 187 searches yielded 90 arrests. Houston was particularly inept. Agents there went 4 for 60. Nationally, the figures were about 50-50. One innocent person subjected to this sort of violation for every drug mule was apparently good enough for the drug war.

We also know that power-tripping cops are not above conducting these searches based solely on petty vindictiveness. Take for example the infamous 2013 case in New Mexico where Deming Police Officers Bobby Orosco, Robert Chavez and Officer Hernandez, and Hidalgo County Deputies David Arredondo, Robert Rodriguez and Patrick Green used rolling through a stop sign as a pretext for kidnapping 63-year-old David Eckert and taking him to a hospital, without a valid search warrant, and subjecting him to 13 hours of invasive searches, including two rectal exams, three enemas, two X-rays, and a colonoscopy. Eckert’s lawyer contended, “Maybe the officers who did this don’t like him living in their community,” said Kennedy. “He’s a white boy, a scraggly white boy, and all these officers are Hispanic. It’s a New Mexico thing.”

But physicians at the Gila Regional Medical Center in Silver City agreed to perform the procedure and a few hours later, Eckert was admitted.

…While there, Eckert was subjected to repeated and humiliating forced medical procedures. A review of Eckert’s medical records, which he released to KOB, and details in the lawsuit show the following happened:

To add further insult to injury, the hospital then sent Eckert a bill for $6,000 for their forced services and threatened to send him to collections for not paying.

Eckert received a $1.6 million settlement in January of 2014. He released a written statement at the time:

“I truly hope that no one will be treated like this ever again. I felt very helpless and alone on that night.”

He likely had a resurgence of that feeling of helplessness upon learning that the sadistic cops who subjected him to that ordeal were still being supported with his tax dollars:

New Mexico Watchdog has learned at least three police officers involved in the case are still on the job, while the status of three others remains a secret.

Deming Police Chief Brandon Gigante told New Mexico Watchdog all three officers in his department who were listed as defendants in a subsequent lawsuit are on active duty. Gigante wouldn’t say why or reveal if the officers were disciplined.

Three members of the Hidalgo County Sheriff’s Office were also listed in the lawsuit, but county officials refused to answer any questions about their status in the aftermath of the case involving Lordsburg, N.M., resident David Eckert.”

We’ve also seen a flurry of cases over the last year, cases we’ve only learned about through the lawsuits innocent taxpayers are paying as a result of sicko cops getting their demented jollies.

In all of these cases, no illegal drugs were found. Of course that only matters if you are the kind of emotionally-stunted dolt who believes that shoving your hands into someone’s vagina or anus is a lesser evil than respecting their individual autonomy about whether or not to ingest substances deemed off-limits by DC bureaucrats.

Ordinarily victims have the right to defend themselves against an assault, but when cops are the assailants, you just have to take it and then file a report (and lawsuit) later, or risk arrest and death on top of the indignity you’ve already suffered. If rape culture exists, there is no higher expression of it than police culture.

290
SHARES
FacebookTwitterGoogleRedditTumblr
DiggLinkedinStumbleuponMailPrint
You Can Support Cop Block by shoppping on Amazon using the banner below:
BANNERS ARE CLICKABLE