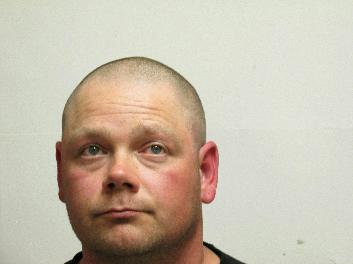 Jamie Scott is the wife of James “Tony” Scott and she admits they had a fight, that lead to him drinking, the night a Bismarck police officer shot her husband three times.

An officer-involved shooting in Bismarck left one man dead Sunday night. The incident occurred around 11:30 after someone called 911, reporting there was an intoxicated man in the back of this building who was armed with a shotgun and wanted to kill the caller.

The suspect has been identified as 42-year-old James Anthony Scott of Mandan. The incident happened at 32nd Street and Rosser Avenue.

Adam Stonestreet was in his apartment doing his homework when he heard gunshots and people yelling outside his window.

“I saw there was cops and I heard one of them yell ‘gun’ real loud. And at that point I took off to go get my wife because she was in the bedroom sleeping and we got down behind the wall and we heard two loud bangs,” said Stonestreet.

In a release, the Bismarck Police Department says dispatch told the caller to move to an area of safety, but the caller refused. The caller then reported the man was walking toward him with a shotgun. Police say the officer believed the suspect to be armed and dangerous.

“The way it went was the officer saw him in the apartment hallway standing next to a shotgun or a long gun, and then he fled out the back door. Then another officer gave him commands to show his hands and get on the ground which he did not do. And at this time we have not found a firearm on that person, on the suspect. You know, we’re still checking the scene to see if he had another firearm. At the time he was found he was not armed,” said Sgt. Mark Buschena, Bismarck Police Department.

While there are little discrepancies leading up to the officer involved shooting it’s what happened after police arrive on scene that has troubled Jamie, leaving her family with many unanswered questions.

James was drinking most of the day after a verbal disagreement with his wife. He ended up at a co-worker’s apartment to which he had previous ‘beef’ with. Jamie believes that even though he had issues with a person in the apartment his over reactions were directly related to his alcohol intake and that he probably wouldn’t have actually hurt anyone. The police haven’t even stated if the gun was James’s or if it was even loaded. Two factors that would put validity to the perceived threat taking place.

In fact, the family suspects that the aggressive interaction between those in the apartment and James was coming to an end because James had put the shotgun down. This was also noted in the story by KFYR:

As officers arrived, one officer saw the suspect in the hallway of 3240 E. Thayer Ave., standing next to a long gun. That information was broadcast to other officers arriving at the scene. The suspect then ran out the back door of the apartment building, northbound toward Rosser Avenue.

It is unknown where the other responding officers were at the time of the shooting. Buschena said those details will come out in the investigation. Neighbors say that the North Dakota Bureau of Criminal Investigations came to interview them around 2:30 a.m.

This is where the story starts to get shrouded in secrecy. Jamie has asked lead investigators repeatedly to answer questions pertaining to her husband’s death. She wanted to know where the officer with the AR-15 was positioned and why he felt the need to fire three rounds into a man who was running away, with no weapon and into an open field (meaning he had nowhere to hide)?

Jamie also did her own questioning of the people in the apartment complex and found several people who were NOT interviewed by police. Including one person who had a direct line of sight of the shooting and witnessed it all. She passed this information onto the lead investigator who said this: Do you think a lead investigator needs the name and not a description of where a person lives in order to track them down? If the dead person were a cop you can be damn sure that everyone within a three mile radius would have been extensively interviewed, multiple times. At a minimum the person who had a direct line of site would have been interviewed, that’s for sure.

While Jamie has found witnesses and pieced together what she can. She has received no help from investigators. Not a coroner’s, police or toxicology report has been provided. She hasn’t been told if any of the officers wore body cameras or even how many times he was shot. Jamie had to look over her dead husband’s body to determine that herself.

Furthermore, this isn’t about placing the blame on police for Jamie. Her father was a police officer and she states she ‘fully understands the difficult positions’ police are put in on a daily basis (though I say that they put themselves in those situations). She just wants the truth, for her family’s sake, and so that people can learn from the situation. And if that means exposing gaps in the police procedure that night, then so be it. That’s what she believes police should do, learn from their mistakes because it seems one officer didn’t get the transmission that James was unarmed when he fled out the backdoor. Or they didn’t care and murdered him, which is much more troubling than what she hopes happened, a simple miscommunications.

Hopefully the police start taking the case more seriously and I’ll update once the investigation is completed.