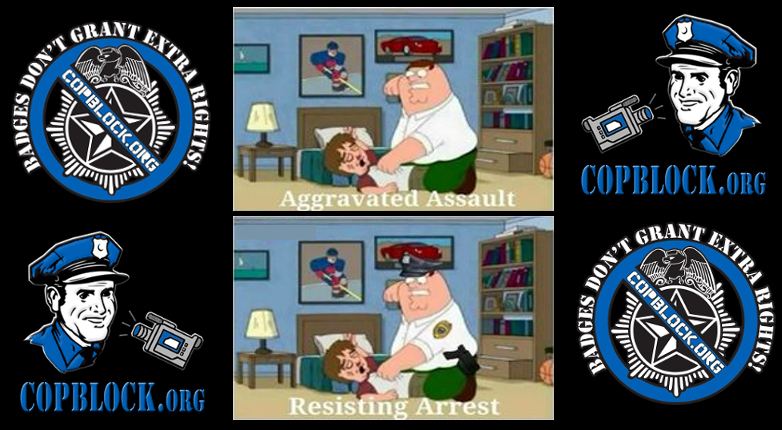 The following post (rant) was shared with the CopBlock Network by William (Kia) D.K. Jones, via the CopBlock.org Submissions Page. William’s submission has to do with the special privileges that police often receive (also known as a “Policeman’s Discount”) regarding when they are caught committing crimes.

“This rant/essay which I’ve titled ‘Blue Privilege in Ohio’ is going to be QUITE lengthy and for GOOD reason. I strongly encourage anyone and everyone to read this to understand just what ‘Blue Privilege‘ is and how it is being used right here locally.

I’m a HUGE fan, supporter, and active cop blocker with MANY possible future submissions. Corruption by the judges and police officers,  as well as the reporters and newspapers that cover local issues is RIFE in my area and I would really like to see some accountability in my area.

This all started after I read our local newspaper’s article on the incident and decided to write a short “essay,” if you will, called “Blue Privilege in Ohio” in response, to point out how officers get off on crimes that others would have the books thrown at them. It led me to research a couple different things including the corruption that the judge that heard the officer’s case has been involved in (debtor’s prisons) or imprisoning people who ONLY OWE court costs.

One thing that really bugged me after reading the online version of the same article done by our local newspaper was that they conveniently left out the part where a SECOND Fostoria police officer in UNDER 2 MONTHS was ‘charged’ and not arrested for a similar offense.

In addition, the articles fail to explain many of the details involved, including whether or not the DUI and OVIs were done in their personal or work vehicles. The Advertiser Tribune has been involved in numerous situations similar to this, where they fail to provide details that point to corrupt officer’s actions in MANY incidents in the area.

I decided it was finally time to call them out in a post, since they have blocked me from commenting on their posts (Because my comments are always against them and happen to get the most likes :) )”

As William points out, oftentimes those with Magic Uniforms and Shiny Badges don’t even get charged in those instances in which they are caught breaking laws. Even on the occasions when the Good Cops that catch them can’t or the even rarer occasions where they actually won’t just allow them to walk away without consequence, these Bad Apples typically receive nothing more than a very sharp slap on the wrist.

The Advertiser-Tribune in Tiffin OH, Fostoria Police Department, Fostoria-Tiffin Municipal Court,and Judge Dwight Osterud are all DISGUSTINGLY corrupt and work together to cover each other’s asses, supply the public with dishonest, misinformation, and supply you with no actual valuable information at all, even though it is very much so public record. If the same circumstances happened involving any normal civilian, it would be published in great detail all over their newspaper. This is a PRIME example of what is called “Blue Privilege” which I will address later on in this essay.

Firstly, to grill The Advertiser-Tribune in Tiffin OH. You’ve published VERY different print and web articles on this matter for very good reasons: HIDDEN IN PLAIN VIEW in the PRINT form of this article in The Advertiser Tribune is a SINGLE SENTENCE that states that ANOTHER Fostoria Police Officer; Officer Cory Brian, was ALSO charged with an OVI and his pre-trial case is set to be heard TODAY in Findlay Municipal Court. Seems kind of fishy to title the article “Officer found guilty of reckless operation” instead of “Two Fostoria Police Officers charged with operating vehicles while intoxicated.”

You’re selling a shitty one-sided story to the public and I thought they should know the TRUTH. Not the bullshit you feed them. Your print article, which is read by far less people, includes MUCH more information than your web article and much more DAMNING evidence of the OBVIOUS “Blue Privilege” in this town (That being that police officers are ‘unintentionally’ but beneficially subject to a separate set of policies and laws with separate, lesser consequences enabling them to act above the law with little to no consequences, and are able to get off on charges, when/if encountered by other police officers, MUCH easier than your average civilian with little to no consequences.)

I would ALSO like to point out that Judge Dwight Osterud, who heard Officer Justin Kiser’s case, is well known for extremely corrupt and flat out ILLEGAL court proceedings which involve the jailing of individuals who ONLY owe court fines:

“A federal judge in Toledo has ruled that Perrysburg Municipal Court officials (Judge Dwight Osterud as well as his clerk of courts) “appear to violate the law” by using the Wood County Jail as a “debtor’s prison” for people who owe court costs.

Fostoria Police Officer Justin Kiser, 34, was pulled over and charged with DUI HOWEVER unlike EVERY OTHER PERSON IN OHIO he did not and WILL NOT serve a single day in jail for this. His case was heard by the infamous Judge Dwight Osterud who changed his FIRST DEGREE MISDEMEANOR Driving Under the Influence charge, punishable by UP TO 6 months in jail and a $1,000 fine, plus court costs, to a FOURTH DEGREE MISDEMEANOR Reckless Operation charge, which is ONLY punishable by up to 30 days in jail and a $250 fine, plus court costs.

Judge Osterud sentenced Officer Kiser to 30 days in jail, with 23 of those days suspended. This means the officer would only have to serve seven days in jail. HOWEVER. Unlike EVERY OTHER SINGLE PERSON who gets pulled over for a DUI, Officer Kiser did not go to jail. He was instead taken to his home which is almost impossible for any normal citizen to be able to do. (Blue Privilege)

ON TOP OF only being sentenced to seven days in jail, he will be credited five days for completing a “driver intervention program” conveniently ran by the Fostoria Municipal Court. In addition, Kiser will also receive a two day credit for completing a “victim impact program,” which is also conveniently ran by the Fostoria Municipal Court. That’s a total of seven days credit, which coincidentally cancels out his entire jail time.

This means that because this man is a police officer, he was able to dodge a 180 day jail sentence and a hefty fine. Instead, he will serve ABSOLUTELY FUCKING ZERO days in jail, due to loopholes in the system that favor police officers charged with crimes.

To sum this rant up, let me attempt to quickly explain the differences in consequences a regular citizen would receive compared to the consequences this officer is receiving:

Instead of getting charged with drinking and driving, he was charged with something MUCH LESSER, which includes things such as peeling out.

It’s disappointing and disheartening to see that those who are sworn to uphold the law and who are given a duty to ‘punish’ those that break it get such different treatment under the same laws they slap us civilians in the face with. This extreme double standard and special treatment under the law cannot go unnoticed and cannot be left alone to be considered okay practice.

It invites the possibility of further corruption into the very cities that we work very hard in to maintain a community and atmosphere that we enjoy. This situation must be dealt with swiftly and appropriately so that we are not left with entirely corrupt city governments.