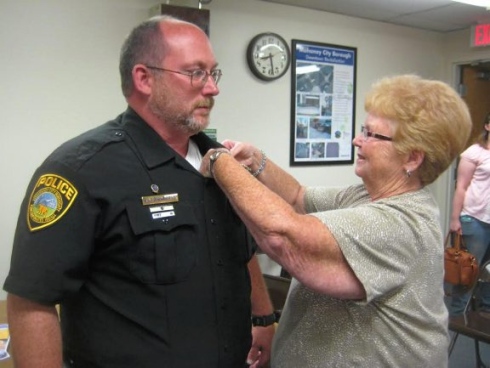 The story I’m about to share with you highlights the absolute absurdity of the “War on Drugs.” James Kaczmarczyk is the former police chief of Mahanoy City, PA who suddenly retired this week. According to 16 WNEP Kaczmarczyk retired under suspicion of stealing ‘drug bust’ money from the evidence locker at the police station.

The former chief and a senior officer failed a recent polygraph test. They were being questioned about money seized from a bath salts dealer two years ago.

Some in the borough question the integrity of their police department.

“There’s no trust there. None at all,” added Michael Loftus.

Schuylkill County District Attorney Christine Holman says the police department cannot account for $10,000 of money taken from Daniel Bynon III in May of 2014.

The $10,000 seized should have been paid to the Schuylkill County Drug Task Force.

And here’s where the drug war rears its ugly head.

Think about it, if Bynon was a construction worker then taking his money would have been wrong, a theft, but since he profited – thanks to prohibition (aka “the War on Drugs”) – from ‘illegal’ transactions it was confiscated. And now that the money wasn’t pushed back into the budgets of the police departments who stole the money, there’s a problem.

Holman asked Mahanoy City Police about where the money went.

“There were several different stories as to where the money went, what happened to it.  And finally, it was decided the state police should be notified,” said Holman.

The D.A. is concerned a review might show more cases of missing drug money in Mahanoy City, and she says it could potentially force her to drop charges against dealers.

Of course there’s more missing money! Bynon probably had $15,000 – $20,000 to start or I’m sure other accounting mishaps have taken place. Evidence shorted, personal items taken and much more. This isn’t a new thing for police to be doing.

The war on drugs has been redistributing wealth from people who actually provide a service (the drug dealers) to the world’s largest gang (the police) since day one. It’s only theft though when you don’t have a badge or when the person with a badge doesn’t cut the rest of the guys with badges in on it. In some form anyways, usually by dividing it up with the team or filling out the paperwork to make sure it comes back to the department’s budget.

What’s sad is that Bynon will probably end up doing more time than either cop suspected of taking the money and that’s the war on drugs for you (mixed with a little thin blue line privilege).