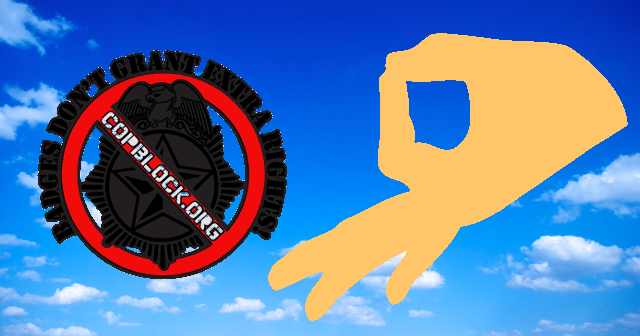 UPDATE 1/18/17: Over the past several months private police contractors at the Dakota Access Pipeline protests in Standing Rock, North Dakota have committed merciless acts of violence against the movement led by Native Americans to protect their land rights and its resources. Do you understand now?

There are few people I know of as dedicated, prolific and consistent as CopBlock.org contributor Asa J. I respect and admire him and his work greatly. So when earlier this week he took some time to address his concerns involving some of my recent statements, I was thrilled. It is that kind of friendly challenge between friends and colleagues that helps to clarify thinking and push individuals and ideas continuously forward. In his piece ‘Why Privatization of Police Is A Necessary Precondition of Abolition‘, he responded not only to the culmination of my recent abolition work, but to an article I wrote a few days earlier entitled ‘Why Private Policing Is No Any Solution At All‘. Below I will address what I see as our key points of contention, but before I do I would like to define some terms to clarify my position.

Police: In charge of enforcing laws in a given geographic area. Work in patrols and by responding to distress calls.

Security: In charge of protecting an individual, group or a piece/collection of property. Works directly alongside person(s) and/or possession(s) being secured.

I am going to rest most of my argument right there. How do patrols and responders protect and secure anything? Unless they happen to stumble on some very stupid criminals, most crime takes place out of the eyes of those who would prevent it. So what exactly are private police going to do? In fact, what have they done? The private policing agency in Detroit mentioned by Asa leaves me absolutely unclear about what, if anything, they have done to help their clients and community. Have they managed to do what public police cannot manage to do, and nab criminals in the act? Are their investigation skills any more effective?

None of these answers are ever given. I am led mostly to believe that private police services act mostly the same way that public police ones do, which is to provide a false sense of security to the suckers shelling out to them. An armed safety blanket may be a comfort to the neurotically fearful, but until private policing services involve accurate psychics to address crimes before they happen, I don’t really see the point.

Not only do I find it to be unhelpful, I find it to be detrimental. When people surrender their self-sufficiency and abdicate self-responsibility to others, it creates a cycle of dependency that is dangerous to the individual. This kind of thinking is what always snowballs into more and more intrusive institutions. It erodes individual freedoms and liberties by imposing collective solutions that disempower people from taking responsibility for their own most valuable asset, their lives. You do you.

Asa mentions that the failure of private policing like Pinkerton was that it existed within the confines of the state. This just so happens to be true of every single private policing agency today. During a transition there would still be a state to influence private police and uphold the monopolies whose interest they work towards. Despite the red button, I don’t see us getting rid of the state before we get rid of policing. The state is the core of the problem. To get to the core we must shed the layers, which means getting rid of agencies like public law enforcement. This is the order that it must be done in. So there will never be a stateless transition period from which to go from public to private policing and then finally abolition.

No middlemen are going to solve the problems of policing or crime. Again, that should be the duty of the individual. Getting to a stateless civilization is not accomplished by shifting more responsibilities from the self. In order to achieve freedom and liberty we must learn to take direct responsibility and control over our own lives, not inventing new ways of passing the buck to others. That is how we got where we are at now.

Asa argues that laws are a naturally occurring phenomena that are essential to any group of individuals. He then claims that religious and moral doctrine is equivalent to law. I fully disagree. Before they are co-opted by the state, religions tend to be a specific response against such structures of earthly authority. Morals, values and ethics mean that the individual does right for the sake of doing right, not because some external code demands it. Morals, values and ethics provide meaningful structures for harmonious interactions between individuals, and that meaning comes from the fact that the goodness is an extension of the individual, not the product of fear of consequences. Goodness out of fear is like a possession unearned, it has far less value than that which is merited by the individuals willpower.

This is how policing causes crime. It disincentivizes rightful behavior by repackaging it as a public commodity. When people come to rely more on the laws and their enforcers than their own morals, values and ethics then criminality is sure to grow. We do not need laws. They are not some eternal truth that we can observe or measure or experience in any way. We totally made that shit up!

What we should focus on is restoring the value of the individual, so that individuals can restore their own agency and will and do right as an extension of those. This is why it is more important to replace police and ultimately the state with new ideas than with copycat solutions. And those new ideas should be entire philosophies from which self-sufficiency replaces dependency. The first place we begin to do so is by correcting a flaw that comes up often in Asa’s piece.

The ideological crystal ball of absolute certainty is more limiting than even police or the state. It is what allows consent for their continuation. Nobody can make absolute statements about the future. Considering the exponential rate at which technology is changing the face of humanity, any projection from the past or present into the future is a highly flawed premise from which to begin a pretense of prescience.

Absolute statements about human nature are equally absurd. Our ‘nature’ is not some fixed cosmic law. We evolve. We also can only directly observe human nature from the pithy time speck of our short lives. Unless we can summon up a Nosferatu that has been around since the dawn of humanity to tell us what changes and constants have occurred, we have no idea what human nature is outside the time span of our lives. And even with the vampires observations, we would not have directly experienced it ourselves, and thus could not be certain of any outside narrative.

Policing and the state rely on magical thinking. They rely on certainty in the unknown and willful ignorance of the known. Fear of the unknown breeds a false certainty that bad things will happen to us in the future if we don’t plan for them with some systematic response. Yet we remain willfully ignorant that all such systematic responses eventually become far greater causes of the problems they were intended to solve. The horrors of police and the state are a known quantity. The bogeymen that haunt our future and create consent for the known sources of horror are not.

At present it is unlikely that a stateless civilization is even possible, at least not given our reliance on complex structures to manage resources in a complex technological environment. At the same time, it is highly likely that in a short time it will be. All that is required are technologies that supercede the limitations in nature and the scarcity our current civilization and economic structures are built upon. When technologically predicated self sufficiency means that no human is left behind, there will be no fighting over scraps. There will be no generations of poverty creating cultures of crime. Ingenuity and invention are what will make us prosperous and safe. And self sufficiency will gives us our freedom and liberty. It is better that we work towards that than concocting new forms of dependency to enslave us from within.

Take that, Asa! I look forward to reading your response.