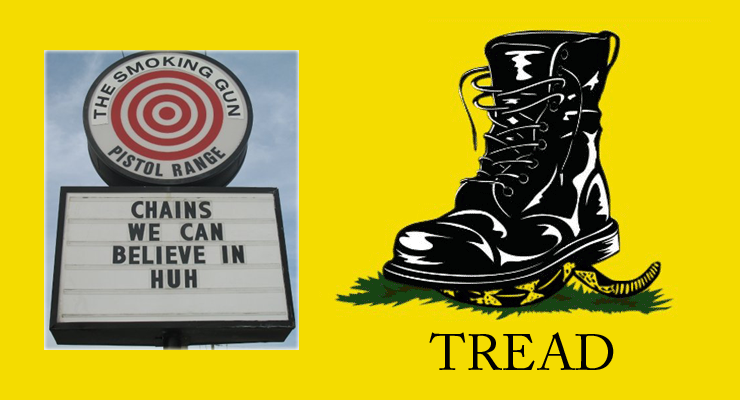 This weekend the Smoking Gun range in Colonial Heights Virginia achieved the internet fame it was looking for when owner Jeff Picchi  posted a photo of a sign that specifically stated that people with non-statist tendencies or who were associated with Cop Block or Black Lives Matter were not welcome at the range.

Let’s start with the first amendment and the right to free association. The owner of this gun range absolutely has the right to say publicly how much he loves cops, and to ban those who disagree from his business. And everyone else has as much right to say, “Fuck you, and your business. I prefer to spend my money elsewhere.”  Granted, the business owner likely never anticipated that so many people would be visiting his Facebook page to express that sentiment, but that’s exactly what happened.

In about 24 hours, the number of comments on the photo jumped from around 55 to over 1,200 at the time of this writing, and the majority of them were overwhelmingly negative. The Smoking Gun’s ratings also plummeted from 5 stars to around 1.4 in that time frame. Despite the pro-military stance indicated on the sign, previous reviews reveal the owner’s love is mostly reserved for our domestic occupying force—law enforcement.

A quick visit to the Officer Down Memorial Page reveals the following about the 16 officers who died in the line of duty in March: Like many second amendment-loving conservatives, the Smoking Gun proprietor has a deliberately myopic view of state agents and government oppression. They live in a world where only federal agents can be jack-booted thugs and government tyranny comes solely from politicians on the left side of the political spectrum. They fret about the impending federalization of local law enforcement, not realizing that cops were already bought and sold to chase federal priorities (and the attached funding) ages ago.

The business’s Facebook page is littered with anti-Obama broadsides and has this worshipful image of Ronald Reagan as its cover image. The irony of this is obvious to anyone who, unlike the clueless owner of the Smoking Gun, knows a few inconvenient facts about the history of gun control: “The Gipper” was a 2A flip flopper who played a pivotal role in getting second amendment rights rolled back in California, and he did so in response to a group of activists who legally armed themselves and open carried to protect their communities from violent and oppressive actions by the local police.  That group was the Black Panthers, and in the late 1960’s they regularly conducted armed patrols to observe and counter abusive police practices in Oakland.

From the Secret History of Guns:

Don Mulford, a conservative Republican state assemblyman from Alameda County, which includes Oakland, was determined to end the Panthers’ police patrols. To disarm the Panthers, he proposed a law that would prohibit the carrying of a loaded weapon in any California city. When Newton found out about this, he told Seale, “You know what we’re going to do? We’re going to the Capitol.” Seale was incredulous. “The Capitol?” Newton explained: “Mulford’s there, and they’re trying to pass a law against our guns, and we’re going to the Capitol steps.” Newton’s plan was to take a select group of Panthers “loaded down to the gills,” to send a message to California lawmakers about the group’s opposition to any new gun control.” The Panthers’ methods provoked an immediate backlash. The day of their statehouse protest, lawmakers said the incident would speed enactment of Mulford’s gun-control proposal. Mulford himself pledged to make his bill even tougher, and he added a provision barring anyone but law enforcement from bringing a loaded firearm into the state capitol.

Republicans in California eagerly supported increased gun control. Governor Reagan told reporters that afternoon that he saw “no reason why on the street today a citizen should be carrying loaded weapons.” He called guns a “ridiculous way to solve problems that have to be solved among people of good will.” In a later press conference, Reagan said he didn’t “know of any sportsman who leaves his home with a gun to go out into the field to hunt or for target shooting who carries that gun loaded.” The Mulford Act, he said, “would work no hardship on the honest citizen.”

What a difference 50 years makes! Today conservatives are the ones painted as dangerous extremists for open carrying in public and for bringing firearms into the Virginia state capital. Turnabout is fair play, isn’t it? Since the Smoking Gun is also in the business of offering courses for Concealed Carry Weapon permits (CCW), its owner was likely in the segment of Virginians left angered by Attorney General Mark Herring’s move to rescind recognition for CCW permits issued in 25 states. Since many of these states honored Virginia’s CCW permits based on reciprocity, this meant Virginians’ permits would no longer be recognized in those states, drastically restricting their ability to legally travel with their firearms.

Understandably, this caused a conservative uproar against Herring and Governor Terry McAuliffe, both Bloomberg-backed Democrats. However, little focus was given to the role of the Virginia State Police in advancing these restrictions. It was the Virginia State Police who conducted the audit that found permit requirements for those 25 states were unacceptable.  An email from the Virginia Citizen’s Defense League (VCDL) also outed the VSP as being behind an earlier move against CCW recognition:

A bill is going to be introduced in January that will change the law to honor the permits from ALL other states. Period. Last year the same bill cleared the House and was killed in the Senate Finance committee when the State Police lied, saying they would lose money if the bill passed.

Look at that, law enforcement not only putting their ability to make money above the rights and safety of the public, but lying in order to do it.

Speaking of law enforcement lies, the Alexandria Police Department was caught red-handed attempting to gin up hysteria about ordinary citizens lawfully carrying firearms in December of 2014:

Unfortunately for the police, a VCDL member was present when they came into a restaurant this morning, handed a flyer to the owner, and chatted with the owner for a few minutes.

Afterward, the restaurant owner showed the VCDL member the flyer and said that the police told him that he didn’t have to allow open carry and if he saw somebody doing so, he could call the police!

The flyer particularly endangers 18 to 20 year olds as it incorrectly tells a store owner that if they see someone under 21-years-old with a handgun on their hip, that is illegal! That is NOT true and having the police show up on a bogus “man with a gun” call endangers everyone unnecessarily.

The flyer also makes these other FALSE claims about the law, which again could lead to unnecessary man-with-a-gun calls to the police:

* Open carry is not legal in churches

* Open carry is not legal in government buildings (we’ll show that’s not true when we flood their city hall on Saturday, December 13th – see below).

The flyer makes a point of saying that sometimes gun owners hold “demonstrations or events” to raise awareness of the constitutional right to keep and bear arms and those events “may cause alarm” and to call the police if the store owner sees “anything suspicious or of concern.”

Aside from the blatant falsehoods, the flyer appears designed to demonize lawful open carry and to confuse and scare the business into calling the police to confront law-abiding gun owners. It does this by citing laws regarding reckless gun handling to paint a frightening image of gun owners brandishing and shooting up his establishment!

The police, of all people, should NOT mislead the public or actively seek to create a chilling effect on the exercise of civil liberties..

Yet another email from the VCDL provides more evidence of Virginia gun owners experiencing less than mutual admiration from local law enforcement. In October, 2014, the Stafford County Sheriff pressured Target to refuse VCDL permission to participate in a National Night Out crime prevention event and to ban open carry of firearms, which is legal and does not require a permit under Virginia law. “In an email exchange in late June, Jett told some staff members that he wished to restrict the use of guns to law enforcement officers only, and that his staff would have to get Target on board with that.”

“The frustrating part from my angle is that the sheriff shouldn’t be in this mode of ‘How can I disarm the public?’ And looking how to get this done. That’s not what the sheriff’s department is about. I’m really shocked that a sheriff would do this in Virginia,” Philip Van Cleave, VCDL president, said in a telephone interview.

It really makes no sense that 2A organizations are always perpetually surprised at local cops’ and sheriffs’ animus towards gun rights when that is the group responsible for the majority of gun control enforcement actions throughout the United States. It’s not the ATF who will be going door-to-door to confiscate citizen arms. Cop-loving gun owners should remember that the Herndon (VA) police were happy to assist the US Park Police in their violent raid on Adam Kokesh’s Fairfax County home (possibly using a helicopter from Fairfax County Police) over a video of him loading a shotgun in DC in defiance of the infamously restrictive gun laws there.

“Cold dead hands” style conservatives talk out of both sides of their mouths when it comes to obeying the law. They are as quick to denounce victims of police terror as “criminals” who should “just obey the law” as they are to vehemently promise not to obey new laws that infringe on their right to keep and bear arms. Then there’s also the implied threat of “come and take it”/molon labe. Does “back the blue” mean they will happily hand over all firearms to any police officers who show up to seize them? Do they think having a “Blue Lives Matter” poster will make the cops go raid some other gun proprietor?

Oh, I see. They think the second amendment protects all of our other constitutional rights, but we just shouldn’t bother trying to assert any of those other rights when dealing with law enforcement. Just change the name of the business to “The Smoking Bootlicker.” And then burn those Gadsden flags you defiled by hanging them up in your shop.

“If ye love wealth better than liberty, the tranquility of servitude better than the animating contest of freedom, go home from us in peace. We ask not your counsels or arms. Crouch down and lick the hands which feed you. May your chains set lightly upon you, and may posterity forget that ye were our countrymen.”

546
SHARES
FacebookTwitterGoogleRedditTumblr
DiggLinkedinStumbleuponMailPrint
You Can Support Cop Block by shoppping on Amazon using the banner below:
BANNERS ARE CLICKABLE