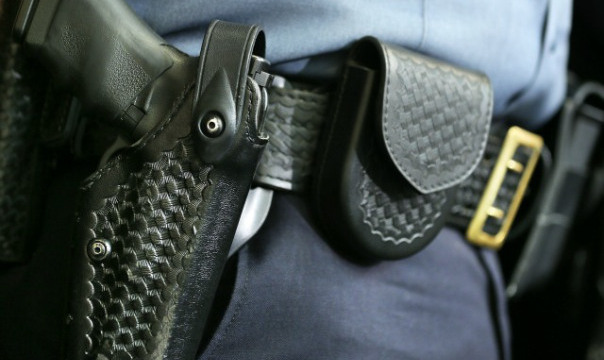 This afternoon while responding to a domestic violence call, an officer with the Visalia police department killed Raymond Hopper. Hopper, a senior citizen, was non compliant with officers orders to drop the steak knife he was holding and was subsequently shot multiple times in the torso.

Sometime around 7:30 a.m. the officer arrived at Hoppers house on East Delta Avenue. After getting out of his squad car, he saw an approaching man with a knife, police said.

Michelle Turner, a resident on the street, said she and her son were inside when they heard the sound of gunshots.

“We heard three shots – boom, boom, boom – you could hear screaming,” she said.

Her son called 911 and the dispatcher said an officer was on scene.

Michelle also said that Hopper had “snapped” and it was “only a matter of time”.

“I knew it was a matter of time. He was the nicest man, and then something snapped,” she said, standing by her son who said he rushed to close the front door when shots rang out. “Police were over here often. He just went crazy.”

The dispute may have been between another male occupant of the house but the situation is unclear according to SGT. Damon Maurice.

There were several family members inside of the home. At this time we don’t know what started the conflict,” Maurice said. “There seemed to be animosity toward one adult male [and his family].”

Mr. Hopper was taken to the  Kaweah Delta hospital where he was pronounced dead.

Not too much else is known about the incident but we can be fairly certain that Raymond Hopper did not threaten the officer or charge him with the knife. If something of that nature had happened, the police would have been the first to cry to the media about a war on cops, how their safety is constantly in danger and no one appreciates the sacrifices that are made by those who stand on the “thin blue line”.
277
SHARES
FacebookTwitterGoogleRedditTumblr
DiggLinkedinStumbleuponMailPrint