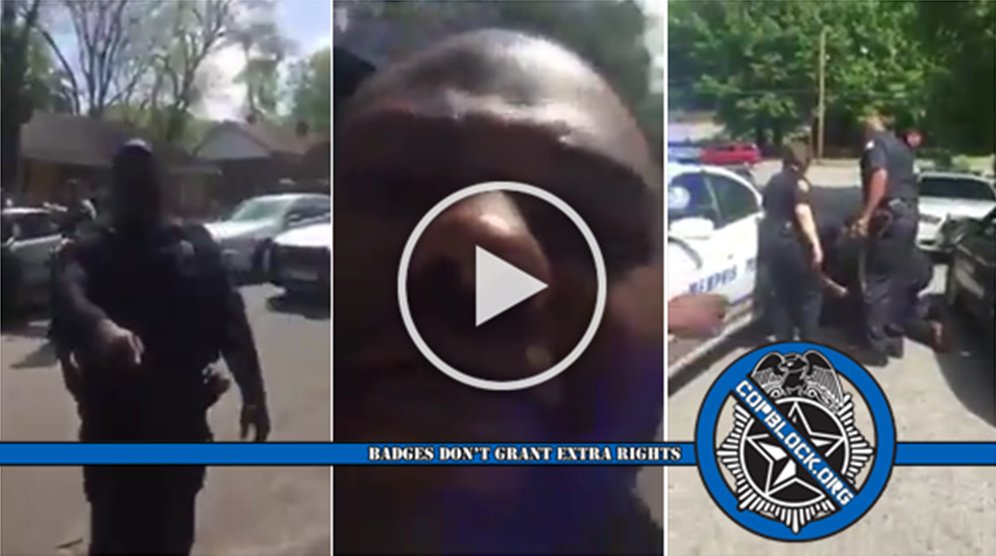 Video has surfaced appearing to show an officer with the Memphis police department tackle a man to the ground for recording before he and other officers swarm and arrest him.

Originally posted to Facebook by someone using the name Francesco DaDon Guglielmette, the footage shows officers speaking with a man near a patrol car before the individual recording the video (Guglielmette) is approached by one of the cops and told to “get on the sidewalk.”

Guglielmette and the officer have a brief exchange before the cop tells him to “leave the scene.” He responds by telling the officer no, and says he is in front of his own home.

The cop can then be heard yelling at fellow officers, asking them, “is this a crime scene?” before telling Guglielmette to “keep it moving.” The man remains defiant and the cop is seen obstructing and grabbing his phone.

“What you doing all this for?” Guglielmette asks the officer as they scuffle off camera.

“Because you got the wrong one lil bro,” the cop responds.

Guglielmette is able to bring his phone up to face level at one point and the officer is seen taking hold of him from behind. It then appears that the man is thrown to the ground by the cop as the phone drops to the pavement.

The footage shows the phone being retrieved by a bystander and Guglielmette is seen on the video face down on the ground as multiple officers attempt to handcuff him while yelling “get your hands behind your back.”

“When did simple recording become a crime?” Guglielmette asked in his Facebook post confirming his identity in the video. “I was assaulted by Memphis Police department just for recording… Arrested on false charges and treated like an pure animal…”

“Someone broke in to my lil brother home… I get a phone call to go check on his mom,” Guglielmette added in the post. “We the ones who called the police… They were just mad because I was recording them abusing their authority.”

It is unclear what charges Guglielmette was arrested on but recording police is not a crime. According to the Memphis PD’s own policy, “members of the general public have a First Amendment right to video record… MPD members… while acting in an official capacity in any public space.”

The policy was updated after a 2012 incident in which officers detained a photojournalist who had filmed an arrest and subsequently deleted his footage. The policy explicitly states that cops with the department “shall not… intentionally block or obstruct recording devices by physical means.”

Instead, the man backed up when he was told to and attempted to record from a safe distance. He continued to be confronted and harassed however, and was eventually assaulted for doing nothing more than exercising his First Amendment right.

Memphis police said in a Facebook post that they “arrested an individual who was filming the scene of a home invasion robbery,” and added that the “video has been turned over to our Inspectional Services Bureau and a thorough investigation is underway.”

“I understand the outrage from the community concerning this video; however, I do ask that you all allow us to conduct a thorough investigation into the actions of this officer,” Interim Director Michael Rallings said. “This investigation will be handled expeditiously and the findings will be released to you all at the conclusion of the investigation.”