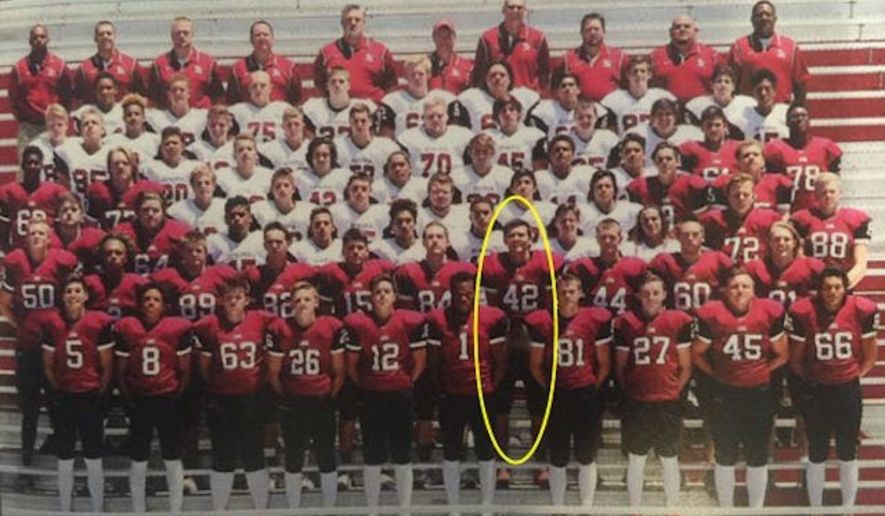 Hunter Osbourne, a 19 year old student at Red Mountain High school, used the football team photo as an opportunity to prank the entire student body. The yearbook was distributed to the  3,500 students, and their families, as well as, being sold at football games before the image was brought to the attention of the administration.

Hunter was charged with 69 misdemeanors of indecent exposure, one for every person in the photo, but a number of charges can be reduced if a number of students over the age of 18 choose not to press charges. The prank was the result of a senior dare and like so many other innocent actions, they get blown out of proportion or criminalized.

Hunter may not have made the smartest decision but it wasn’t his fault that the photo was distributed.

From the change.org petition.

The problem isn’t with just the photo but instead that it was published in the school yearbook and distributed. He was jailed on the night of his senior prom with 69 counts of indecent exposure, a class 1 misdemeanor, and a class 4 felony. He didn’t put the picture in the yearbook, he didn’t create the page, he wasn’t the editor that approved it, or the teacher responsible for publishing it and distributing it to students. The teacher responsible for the yearbook should be fired. Red Mountain High School is using him as a scapegoat instead of taking any responsibility! Hunter needs to be held accountable for his actions but that doesn’t mean ruining his life! #FreeHunter

Even the town recognizes the need for Hunter to take responsibility for his actions but understand that making him a felon is not the appropriate punishment for this adolescent prank. I personally think a fitting solution to the situation is for Hunter to purchase any unwanted year books with a picture of his junk in them.

As a result of the photo Hunter was incarcerated on the night of his prom but was released on his own recognizance after submitting to an ankle monitor.

Zach Anthony and Brooke Bodrero both said without being instructed where to look they never would have known that Hunter’s exposed penis was immortalized in the yearbook.

“He made a dumb mistake a little bit, but I don’t think he should be charged so heavily for that,” senior Zach Anthony said

“It’s something that’s going to be on his record for the rest of his life,” Bodrero said. “The consequences are a little harsh.”

There may have been a conspiracy within the football team to pull this prank off successfully. It does appear that two other players give just enough room for the camera to capture his exposed penis and if anyone thinks he came up with the idea to expose himself on his own; they have probably never played on a sports team or had close friends.

It ‘s not currently known if Hunter will have to register as a sex offender if he is found guilty.

If you would like to help Hunter, please sign the petition on change.org and consider calling the DA and asking them to drop the charges. Other than some embarrassment and a few laughs there is no victim in being exposed to a micro image of a penis.