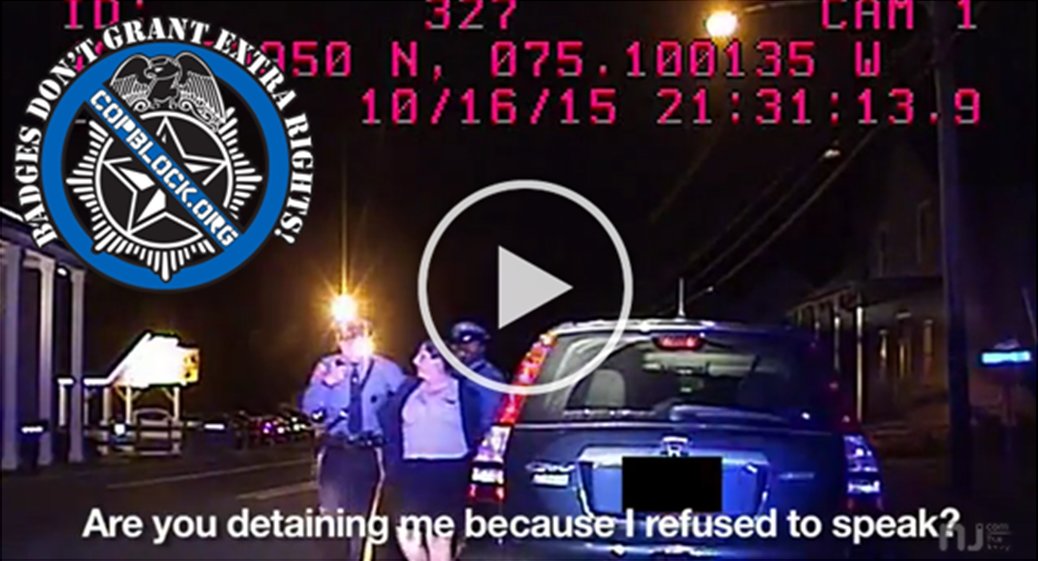 Dash-cam video has been released as part of a federal lawsuit showing an attorney being arrested by New Jersey state troopers for choosing to remain silent during a traffic stop.

Occurring near the New Jersey-Pennsylvania border on Route 519 in Trenton on Oct. 16, Philadelphia attorney Rebecca Musarra says in the suit that the troopers violated her civil rights when they took her to jail on an obstruction charge for refusing to answer their questions.

Musarra was pulled over for speeding at around 9:30 p.m. by Trooper Matthew Stazzone, who was quickly joined on the scene by Trooper Demetric Gosa. The video shows Stazzone approach the vehicle on the passenger side and ask Musarra for her license, registration, and insurance.

“While you’re looking for that, do you know why you’re being pulled over tonight?” Stazzone can be heard asking on the footage.

Musarra said she provided the trooper with the appropriate documents but didn’t respond, choosing instead to remain silent. The video shows Stazzone ask her several more times before walking to the other side of the vehicle.

There he is seen tapping on Musarra’s window with his flashlight and he again demands a response from the woman stating, “you’re going to be placed under arrest if you don’t answer my questions.”

Musarra claims Stazzone chipped her window with his flashlight and the footage shows a brief exchange before she tells him she is an attorney and that she does not have to answer questions.

Stazzone is then seen ordering Musarra out of the vehicle, and as the two troopers handcuff and walk her to a patrol car, she asks, “are you detaining me because I refused to speak?”

Musarra is then placed in the back of the cruiser and is read her Miranda rights by Stazzone, which include, “you have a right to remain silent.” She is then hauled off to the state police barracks in Washington.

In her federal suit, Musarra says once at the jail, she was patted down twice and cuffed to a bench inside a holding cell. She says she was denied phone calls with troopers promising to call her parents on her behalf, but never following through.

Obstruction in New Jersey is defined as impeding law enforcement through “flight, intimidation, force, violence, or physical interference or obstacle, or by means of any independently unlawful act.” Obviously, Musarra did not engage in any such behavior.

Musarra says the whole ordeal lasted about two hours before other troopers reviewed the dash-cam footage and told her “a mistake was made, and to chalk it up to training, and that [Stazzone] was just a rookie.” She was then released, and was able to get her car out of impoundment with no charge.

“In every instance where misconduct is alleged against a trooper or troopers, as is the case here, [internal affairs] will review the allegations and investigate the facts,” state police Capt. Stephen Jones said. “In the event that problems are identified, training and/or disciplinary measures are implemented where appropriate.”

State attorneys, who are representing the troopers in the civil matter, have already sought in federal filings to have the case dismissed. They have said Stazzone and Gosa “acted in good faith and without fraud or malice,” but have not addressed the specific allegations in the suit.