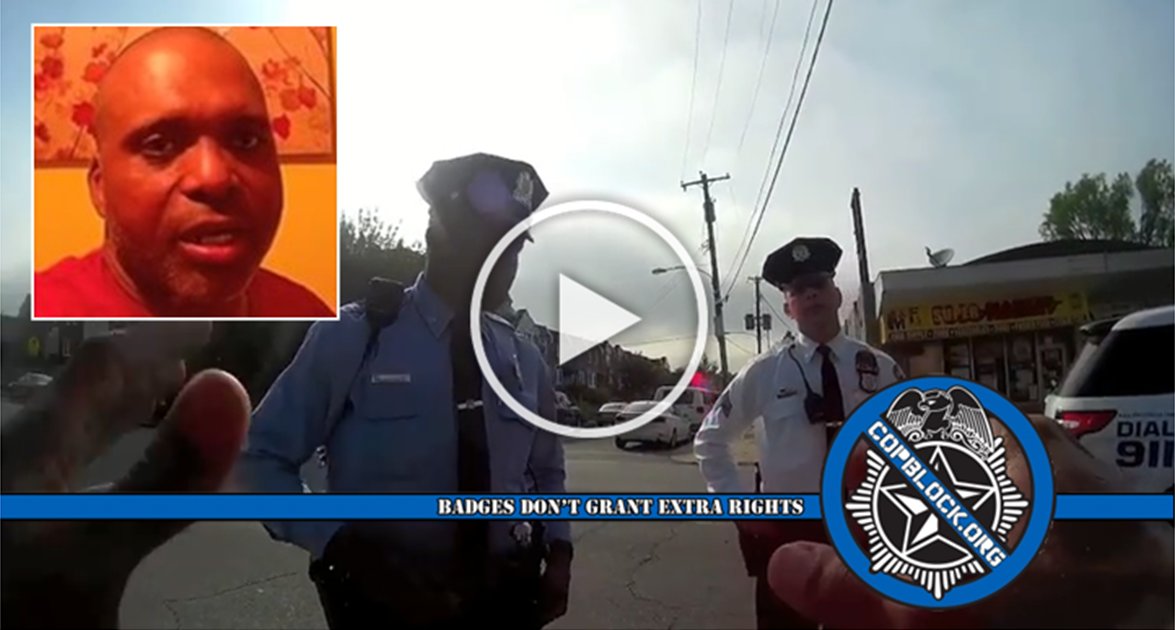 A Mount Airy, Pennsylvania man says he was handcuffed and relieved of his firearm and wallet after he refused to bow to the whims of police during an open-carry jog that he captured on video.

On Monday, the 49-year-old was stopped by a Philadelphia officer in the 14th District of the city and recorded the first 15 minutes of the encounter with his Go-Pro camera before its battery went dead.

The footage shows the cop, who identifies himself as Officer Cave, cross Vernon Road on foot and ask Moody about his handgun and whether he has a license to carry it. Moody refuses to answer the officer’s questions and Cave calls for backup.

“Am I being detained?” Moody asks. “For what reason?”

“Because you have an open gun,” officer Cave responds. He then erroneously asserts that Pennsylvania is “not an open-carry state.”

Moody corrects the cop and he concedes the point but insists that because Philadelphia is a “first-class city,” it is “required” that he show he has a permit.

After multiple other officers arrive on the scene, including a sergeant, the cops take turns asking Moody to show a license to carry and provide identification. Moody stands firm however, and tells them they have no probable cause for demanding his papers because he was doing nothing wrong and Pennsylvania is not a “stop-and-identify” state.

The officers then cite recent murders in the area as the reason for their suspicion with Cave stating, “how many more bodies do we have to bury before we get rid of the political stuff” – which implies that because criminals exist, individuals should be OK with being harassed by cops for doing nothing more than jogging down the street with a firearm.

Cave also appeals to religious convictions that Moody says he has. by saying, “the lord says you will fall under, at least, delegated authority – which delegated authority means someone like myself.” In other words, Cave sees himself a being endowed by God with temporal power to decide what is to be done about jogging gun owners.

Citing the recent murders again, Cave inquires about whether Moody has kids and asks if he would want officers to do the exact same thing that they were doing to him if they saw another individual in the area with a firearm.

“I would not want you to step on anybody’s civil-liberties,” Moody responds. “I would want you to do your job and you seem like a fine officer, as [do] your colleagues, but I’m not going to trade my civil liberties away so everything looks OK. I’m not going to do that sir.”

During the entire process, the officers and Moody remain cordial before the footage abruptly ends as one of the cops points to her phone and tells Moody he is not allowed to open-carry. Moody provides commentary after the footage in a video uploaded to YouTube saying that the battery in his Go-Pro went dead, and describes what happened next.

Moody says the officers handcuffed him, took his gun, and “called down to the firearms carry licensing department and tired to have [his] carry license revoked.” He says the officers also violated his Fourth Amendment rights by rifling though his pockets and forcibly removing his wallet to identify him.

The issue at hand was not whether or not Moody had a license to carry – he did. The point he was trying to make with the officers is that the mere presence of a firearm alone is not probable cause or reasonable suspicion to detain someone and demand them to identify themselves.

After Moody’s carry license was discovered in his wallet, he says the cops returned his gun and allowed him to leave – but not before he was “humiliated, imprisoned, and threatened for no reason at all.” Moody said he received no apology from the officers.

“These are our rights, our God-given rights,” Moody said. “I’m not going to let anyone take them away from me.

In other words, because Moody does have a license to carry, he can legally open-carry in the city. The PAFOA warns however, that doing so “will draw unwanted attention from law enforcement that may include: being stopped and questioned, having your License To Carry Firearms seized and sent back for revocation, and being arrested either improperly or for other charges like disturbing the peace or creating a public nuisance.”

The Philadelphia police department has not commented on the incident but Moody says their actions will not deter him from exercising his rights by open-carrying in the future.

“Clearly, the officers don’t know the laws that Philadelphia is governed by,” he said. “They had no clue about what is lawful and unlawful… Freedom isn’t free. I call it my exercising my mind, my body, and my Second Amendment rights.”