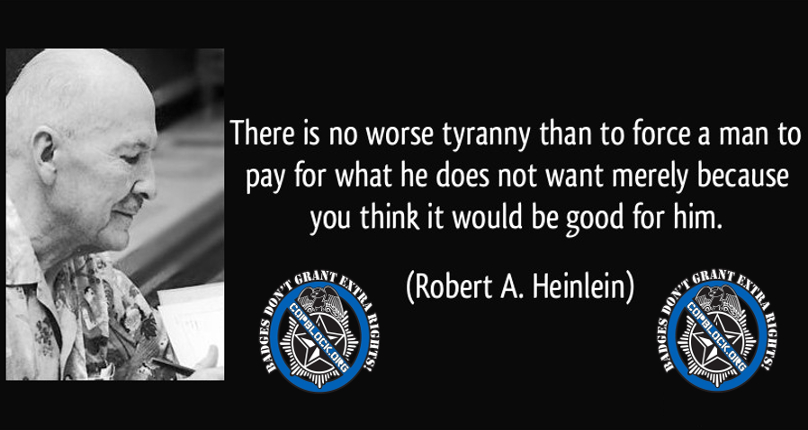 The number one source of police corruption stems from the fact that all police services are currently centralized.  As a general rule of thumb, most people are afraid of monopolies, and the bad things that occur because of them, but most people don’t care about monopolized services that governments provide. The rule still holds true, however, that monopolies are bound to become corrupt… which is why police services must be put on the market.

Secondly, seeing as how police are provided by governments currently, police are bound to enforce their respective governments’ laws.  As we all know, a lot of politicians today are very corrupt and bought out, which effectively means that the laws the police enforce are corrupt. A lot of people would say, “Well, don’t blame the police. They only enforce the laws, they don’t write them.” The issue is that the police act out of free will, and voluntarily choose to enforce corrupt laws. They are morally responsible for enforcing corrupt laws because they are responsible for their own actions. Without them, politicians would just dream away of taking away peoples’ freedoms. With them, it becomes a reality. Furthermore, no one would voluntarily pay for these centralized police if they knew what these police enforce.

People would just use private police the same way that people use private security now- they would use them as help when someone commits an act of aggression against them. They would enforce common law, not politicians’ law, because most people don’t want cops going after people that don’t harm other people because they don’t want it done to them. The police would only supply what their is demand for, which is what inspires private police to only perform moral acts.

Putting police on the market makes them subject to morality. If they perform an immoral act, they won’t have a judge that works for the same people as them on their case, so they can actually be charged in court with what they do, instead of the current scenario where courts and police are both paid for by governments, so the court rules in favor of the police. Besides, if one private police business was hired to  harass someone, people would have other private police services to hire to defend themselves, instead of now, where calling the police on the police essentially means that you’re risking giving the police harassing you back up.

We can all agree that monopolies aren’t good, so why do we want to monopolize the most vital services necessary? Why do we hate when companies lobby for government regulations that try to make them have a monopoly, but not mind when goods and services are monopolized and offered by a government? Are we too afraid to look at the results objectively because of cognitive dissonance? Have we, as a society, failed to acknowledge that all monopolies are bad? Do we think that we have to force people to pay for services that they don’t want in the event that they might use it, and have it backfire against them, instead of letting them buy what they want?

I am the founder of anarchfree.info. I am an anarchist, a capitalist, and a Voluntaryist.