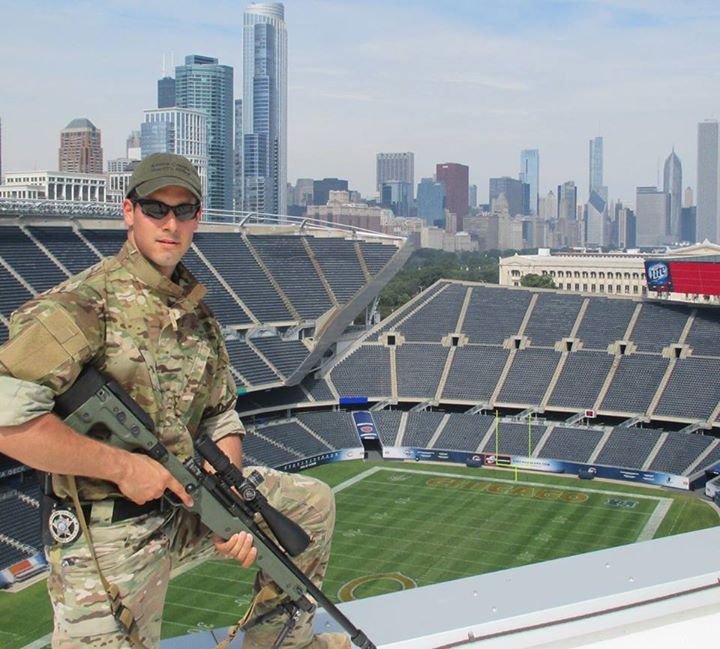 LibertyFight.com’s Martin Hill has been keeping very close tabs on the murder of Jack Yantis by two Adam’s County Deputies. In short, Yantis was called to the end of his driveway after one of his livestock was hit by a car. Somehow during this incident the two deputies opened fire on Yantis and killed him.

Since then both officers have been on paid administrative leave. The story hasn’t surfaced since one of the shooter’s wives took to social media to defend her husband. Yet, that seems to have taken a turn as well as it seems that officer – Brian Wood – is currently losing his mind, a danger to those around him and even his fellow police officers believe so.

The text below was submitted by Martin Hill and is based off his sources/research on the matter. I did email the Sheriff, Ryan Zollman, to confirm if the document below was in fact issued by  a neighboring county sheriff. He is currently ‘out of town’ but I will update this post when I confirm validity.

Probably not, but Brian Woods is and he has the taste of blood in his mouth, he’s killed before and is capable of killing again. Yet, he walks freely among us. Law enforcement in Idaho has issued a ‘LAW ENFORCEMENT SENSITIVE’ internal document known as an “ATL” – attempt to locate – Brian Wood, one of the deputies who killed 62-year-old rancher Jack Yantis on November 1, 2015. LibertyFight.com has obtained a copy of this three page document.

Brian Wood is an FBI-Trained Sniper, who was previously sued for roughing up a 79-year-old man.

“ACCORDING TO ADAMS COUNTY SHERIFF’S OFFICE, Brian Wood has become increasingly unstable in recent weeks.. Brian Wood is one of the Adams SCO Deputies involved in the recent officer Involved shooting in Council. ACSO (Adams County Sheriff’s Office) advised Wood and his wife are separating and there have been recently reported Domestic Violence issues in the Home. During a conversation with Adams CSO, Wood advised “If cops get involved, shots will be fired.” On 01/20/16 Wood was observed collecting guns from a fifth-wheel trailer on sister-in-laws property. Since that time, Wood’s whereabouts are unknown. Adams CSO stated Wood claims to have access to explosives. Wood’s in-laws currently reside in Meridian (info above) and have requested extra patrol due to statements from Woods that they are “not safe”.

*NO CHARGES HAVE BEEN FILED ON WOOD. ACSO IS NOT CURRENTLY INVESTIGATING ANY CRIME INVOLVING WOOD. OFFICER SAFETY ONLY*

Below that is the ‘requested patrol location’ (in-law’s address).

Page two of the document includes eight photographs of the in-laws home, and page three includes an aerial photo of the property and a map of surrounding streets and outlying areas.

On November 1, 2015, local sheriff dispatcher called Jack out to tend to an injured bull which had been hit by a car. Shortly thereafter he was shot to death by the very sheriff department which called him for help. Jack’s nephew Rowdy Paradis, who was a witness, wrote that Jack was “Murdered in cold blood by trigger happy rookies gunned down at the end of his own driveway for trying to take care of his own livestock!!!!!! As their own dispatch had asked him to do I how they get the death penalty.”

Jack’s daughter Sarah Yantis said “My dad Jack Yantis was brutally gunned down and murdered by the Adams County deputies… My father did not receive any care, including medical care, prior to my arrival. And he was shot and left for dead like common roadkill.”

Jack Yantis’ widow Donna, 63-years-old, gave this account of the incident from her hospital bed. She had a heart attack upon seeing the police murder her husband.

“On Nov. 1 at approximately 7 p.m. Adams County Sheriff’s Department called and told us there was a bull that got hit and they wanted us on the scene and he was mad. So we went down to check it out. I took Jack his gun so he could put the bull out of its misery. When he walked up there and was gonna put him down the officer came up and jerked him back almost off his feet. I don’t know what they told him, but they just opened fire and shot him. And then they threatened me and my nephew, Rowdy Paradis, threw us on the middle of Highway 95, searched us and handcuffed us and wouldn’t let us go take care of Jack.”

On November 30, 2015, thirty days after Jack was killed, neither the Sheriff nor the corporate media would release the names of the two killers. This was supposedly for their safety – as if the public at large were dangerous, unstable maniacs. That is when LibertyFight.com decided to name the two sheriffs who killed Jack Yantis: Brian Wood and Cody Roland. Thirteen hours after our story went super-viral worldwide, their boss Ryan Zollman held a press conference and was forced to acknowledge their identities.

Three days after we revealed their identities, the killers went into ‘damage control’ mode. Brian Wood’s wife MacKenzie Wood shockingly posted on Facebook that “I am very proud of both of these men!”On December 7th, Brian Wood himself posted a Facebook message defending Jack’s killing, which began

“Friends, The last five weeks have been the most trying of my life. I’d elaborate, but I’ve come to realize I don’t need to because I’m not experiencing this alone, I’m not hurting alone. You have shown me that you love me, that you trust me, and that you are hurting with me. It’s pretty demoralizing to get several messages, calls, texts, and e-mails each day telling me I’m a murdering piece of _____, a baby killer, and everything in between. These people have no real clue what happened that night, but it still adds up to weigh a person down. That’s why I’m so grateful for you.”

I replied to Wood directly, asking, among other things, if he was some sort of psycho.

This latest revelation, that Sheriff Ryan Zollman knew all this information about Wood for months, sheds new light on just how untrustworthy Sheriff Ryan Zollman is. [See the e-mail I sent to Zollman on 11/15/15, A Few questions for Sheriff Ryan Zollman.] Just three days ago, LibertyFight reported on the extremely cavalier attitude of the Adams County Sheriff Department when the Yantis family called to report that their Justice For Jack sign had been stolen from their property: [Sheriff’s Dept. Who Killed Jack Yantis Responds To Theft of ‘Justice For Jack’ Sign With Dismissal, Skepticism.]

Sheriff Zollman, a Republican, faces an election challenged this November by retired lawman Tom Watts, who is running for Sheriff as an Independent. His campaign website isTomWattsForAdamsCounty.com. There is also a Republican write-in candidate who will be opposing Zollman in the Republican primary. If elected in the primary, she has vowed not to run against Watts in the general election.

Multiple people in Council have reported harassment by police and fear of the two killer deputies, who to this day are on paid leave. It’s been over six months since Jack Yantis was killed, and both the Idaho Attorney General and Idaho State Police have yet to release their findings on the case.

According to another one of our sources, the following information also pertains to this case:

This ATL was issued for 2 Reasons..
First was a Welfare check of Mr Brian Wood’s Family to make sure He and they were okay…
Second was to make sure that Mr Brian Wood is NOT a Threat to Himself or those around Him…

This is known Information with LAW ENFORCEMENT CIRCLES !!

The ATL was issued Statewide In Idaho to Warn other LAW ENFORCEMENT OFFICERS on Jan. 22, 2016…

Why was the JACK YANTIS FAMILY AND FRIENDS and the Community of Council Idaho who support JUSTICE FOR JACK not WARNED about Possible DANGER and BODILY HARM ????

If we as Citizens Threaten Verbally to shoot a Law Enforcement Officer or We as Citizens were involved in Domestic Violence with Family.. WE WOULD BE LOCKED UP AND THE KEYS THROWN AWAY AS EXAMPLES OF THE WORST KIND!!!

EVERYONE!!! Call the Adams County Sheriff Office!!!
Find out the TRUTH of what has BEEN HIDDEN FROM PUBLIC VIEW..???
Find out why a FELLOW OFFICER IS DIFFERENT THAN YOU OR I???

ASK FOR TRUTH AND JUSTICE FOR JACK YANTIS !!!

LibertyFight received notice several months ago from a source in Council that Wood was experiencing marital problems after allegations of infidelity on his part- specifically the allegation circulating among towns folks was that he was cheating on his wife a 19 year old girl and that his wife had filed for divorce. Since we couldn’t verify or corroborate that story, or find divorce records, we did not run it.

Adams County Idaho Sheriff Ryan Zollman, who is facing challengers in both the upcoming Republican primary and in the general election in November, was asked two weeks ago by the republican candidate at a public town hall meeting, the following question. Knowing what you know now about this case, would you rehire the two deputies who killed Jack Yantis? Zollman replied with a resounding YES. At a previous town hall meeting shortly after the shooting, Zollman denied that his deputies were trained by the U.S. Department of Homeland Security, despite the fact that LibertyFight.com had published countless official records from the official Adams County meeting minutes, admitting DHS training, funding, and mandates.

So, Zollman said that he will re-hire Brian wood and Cody Roland.

Keep in mind, this is three months after Wood, according to law enforcement itself, threatened to shoot cops and had explosives, and was involved in domestic violence.

Why was the Yantis family not warned about this danger?

Why were only police warned that Wood is dangerous, unstable, and that they should, quote, “use extreme caution”?

Why were the activists and loved ones in the ‘Justice for Jack‘ group not warned about their safety?

You can view the document below. Some information, such as addresses of Wood’s in-laws, has been redacted.

Stay tuned to LibertyFight.com for latest developments on this story.

Be sure to check out our Jack Yantis case archives – we have a great deal of information on this case.

You can find the most recent articles from LibertyFight.com here.