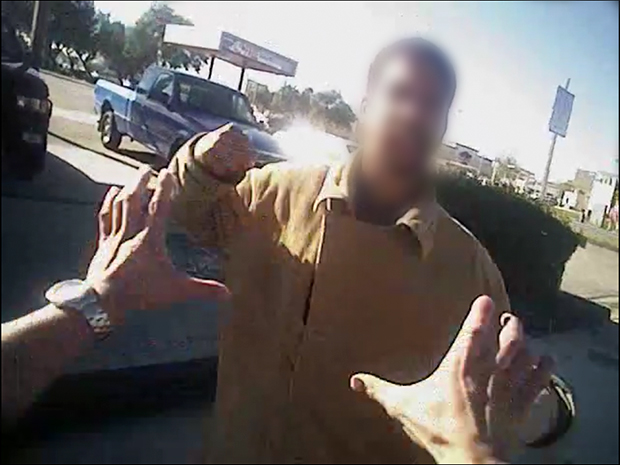 Sometimes police body cameras accomplish their intended purpose, but other times they backfire. And nobody knows why?

Police body cameras are popping up everywhere, often to good effect because both police and suspects normally behave better in their presence. No wonder these small devices, enthusiastically endorsed by police, politicians, and civil-rights advocates, have generated a burgeoning industry. Yet people know very little about how and why they work, so the intended and unintended consequences of using them remain nebulous.

That’s not for lack of effort. There have been nearly 40 studies on the use of body cameras, including a dozen randomized controlled trials on the magnitude of their effect on policing. Despite all this work, it’s still not entirely apparent why these cameras are helpful, under what conditions, or for whom.

Here I’d like to offer my interpretation of all that research and to delve into what sets police body cameras apart from other video-recording equipment, such as closed-circuit television, dashcams, and everyday smartphone cameras.

Ultimately, body cameras are just video cameras, albeit specialized ones for capturing evidence in a reliable way. Although body cams are relatively straightforward technology, their effectiveness has proven highly variable, for reasons that remain puzzling. Why, for example, does their use reduce by more than half the number of times officers apply force during their encounters with the public in some places, while in other places it nearly doubles the reported use of force?

To address these questions, it’s helpful first to consider other surveillance devices used in policing. These have a longer track record and could offer some insight into the new phenomenon of body cameras.

Over the past 25 or so years, surveillance cameras have increasingly become an integral part of law enforcement as technological advancements made video cameras better, more reliable, and substantially cheaper. Most, if not all, police agencies in developed nations use closed-circuit television (CCTV) with the aim of deterring criminal activity, investigating crimes that have taken place, and prosecuting those responsible for them.

London, for instance, is under such heavy police surveillance that it’s hard to find streets not covered by CCTV. And many of the blind spots that remain are targeted by private video cameras. So when you’re in London, as well as many other cities, nearly every move you make in public is videotaped, tagged, and filed away somewhere.

But do these cameras really prevent crime and disorder? Common sense says, of course they do. If potential offenders are rational actors, aware that their misdeeds will be caught on video, they will surely be deterred from wrongdoing. This is the rationale for concluding that bad guys will not victimize us when there is CCTV, an ever-more common part of life for which we all pay the price of infringed privacy.

Despite such intuition, and despite the huge investments made, overwhelming evidence indicates that CCTV equipment has, in fact, little deterrent effect. At least 44 studies illustrate that CCTV reduces the overall level of crime by only about 16 percent, with half of that reduction concentrated in parking lots. There is no effect at all on assaults, robberies, and similar against-person violent crimes. The evidence also tends to show that what little criminal behavior CCTV prevents is just displaced to other areas.

In short, CCTV cameras are pretty much a failure. Perhaps that’s because offenders know where the blind spots are. Or maybe it’s because CCTV does not work well in the dark or when the perpetrator wears a hoodie. Another possibility is simply that police lack the resources to assign somebody to sit through endless hours of recorded video hoping to find clues in not-so-serious crimes. Or it could also be that CCTV has become such an integral part of everyday life that its presence escapes people’s conscious attention. Whatever the reason, it’s clear that although CCTV may make you feel more secure, it does not really make you any safer, although it makes it modestly less likely you’ll get your car broken into or stolen.

Another common type of video surveillance, the one that has accompanied the proliferation of smartphones, might actually be more important. Video cameras are ubiquitous, and the video recording of engagements between police and public is incredibly influential, especially when misconduct is caught, be it the infamous beating of Rodney King in Los Angeles in 1991 or the killing of Eric Garner in New York City in 2014. These recordings certainly demonstrate the effect of cameras on public reactions to the police, having sparked the Los Angeles riots of 1992 and the Black Lives Matter movements of 2015.

Given the notoriety of such videos, a camera at the scene of a police-public encounter ought, logically, to send out an accountability cue, eliminating feelings of anonymity on either side. There is no strong evidence, however, to support the conclusion that mobile-phone cameras deter officers from misconduct. The Garner incident is particularly telling in this regard: As clearly shown in the recording released to the media, officers were well aware of the cameras filming them (some of them looked directly at the cameraman), yet they still used a prohibited chokehold. Why?

There are probably two reasons. First, the officers might have been aware of a camera, but it still didn’t really register. Here, as in many other highly charged encounters, people just don’t think much about all the cameras around them before making the decision to throw a punch or otherwise misbehave. Second, even if they are aware of being recorded, the parties involved might not perceive a strong possibility that the footage captured can and will be used to hold them accountable for any type of misconduct. Because it is not official evidence, the video from a civilian’s smartphone camera doesn’t seem to inspire concern that it will surface later.

I should point out that one particular type of camera is effective in preventing unwanted behavior: road or speed cameras. A systematic review of 35 rigorous tests of road cameras has shown that they reduce serious and fatal accidents by as much as 44 percent. The evidence is unequivocal. They do exactly what they are intended to do. Even a speed-camera sign, with no actual camera anywhere, prompts drivers to slow down. Unlike CCTVs or smartphones, speed cameras work because punishment for illegal actions is virtually guaranteed.

Where do body cameras sit on this spectrum of effectiveness? There have been 12 randomized control trials, with another 30 ongoing research projects seeking the answer. My students in the police executive program at the University of Cambridge, in England, and I have conducted most of the randomized controlled trials that have been published so far, including onethat is now commonly referred to as the “Rialto experiment.”

This study, which really gave rise to today’s heated debate about police body cameras, took place in Rialto, Calif., a town of about 100,000 located some 100 kilometers east of Los Angeles. I worked on this experiment with Tony Farrar, then Rialto’s police chief, while he was completing a master’s thesis, for which I served as his academic advisor.

My Cambridge colleague Alex Sutherland helped Tony and me give this evaluation of body cameras a high degree of statistical rigor. Indeed, we devised this test just as if we were investigating the effectiveness of some new drug therapy. The study involved all of the town’s 54 frontline police officers, who for an entire year, starting in February 2012, would be assigned either to treatment (camera-wearing) or control (not camera-wearing) conditions when they went out on patrol.

During treatment shifts, officers were asked to take video of all their interactions with the public, to announce that the encounter was being recorded, and subsequently to store the footage on a secure cloud-based server. In control shifts, the officers were told not to use body cameras at all. Outcomes were then measured in terms of officially recorded use-of-force incidents and complaints lodged against Rialto police officers. At the end of a year, we were able to compare nearly 500 patrol shifts during which all police-public encounters were assigned to treatment conditions (wearing cameras) with a roughly equal number of shifts assigned to control conditions (not wearing them).