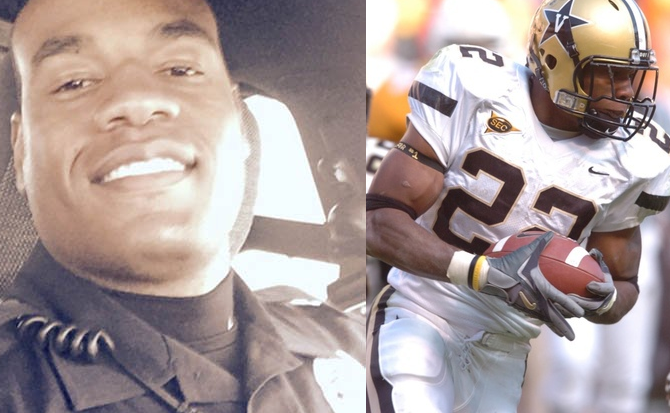 Oak Ridge Police Officer, Cassen Jackson-Garrison, has been arrested for the rape of a 16-year-old girl while on duty. Officer Jackson-Garrison was arrested shortly before noon in the Mt. Juliet area in Middle Tennessee by agents with the Tennessee Bureau of Investigation and the Anderson County Sheriff’s Department and is being transported to the Anderson County Jail.

He was indicted Tuesday by the Anderson County grand jury on charges of aggravated statutory rape and official misconduct and is scheduled to be arraigned May 23 in Anderson County Criminal Court. (Read the District Attorney’s Press Release)

Jackson-Garrison was a probationary Oak Ridge Police Officer at the time of the alleged incidents. He had a storied career in football, first as a running back at Central High School and then at Vanderbilt University in Nashville.

Authorities learned of the initial allegations against Jackson-Garrison on Aug. 13, 2015, when the victim’s stepfather, who was in jail at the time, told an Oak Ridge police officer that Jackson-Garrison “had engaged in inappropriate contact with his stepdaughter,” District Attorney General Dave Clark said in a news release in August.

The girl’s mother “corroborated the basis of the stepfather’s allegations,” it continued.

Those allegations spurred an immediate, all-night investigation by several law enforcement agencies, including the Tennessee Bureau of Investigation, and led to Jackson-Garrison being fired by the city the next morning. Officials said the investigation indicated Jackson-Garrison was on duty when he parked his police cruiser near the girl’s home and walked there while the victim’s mother was away at work.

Jackson-Garrison reportedly met the victim when he and another officer had responded earlier to a domestic violence complaint that led to the arrest of her stepfather.

Authorities in August expressed outrage over the allegations, with Clark saying he was “angry and bitterly disappointed in Garrison’s conduct on duty,” while City Manager Mark Watson in the news release called it a “very serious matter.”

Jackson-Garrison was on his second, six-month extension of his one-year probationary period with the Oak Ridge Police Department at the time of the rape.

His personnel file says he also had a brief sexual encounter with a woman he met while on duty in April 2015 that ended after the woman alleged Jackson-Garrison and his wife had threatened her on Facebook.

According to a reprimand letter placed in his personnel file by now-Assistant Police Chief Charles “Robin” Smith on June 5, 2015, Jackson-Garrison exhibited “poor judgment by: obtaining the name of an alleged victim of crime reported to the Oak Ridge Police Department; contacting the person, representing yourself as a member of the Oak Ridge Police Department; and entering into a sexual relationship with that person.”

“You placed yourself and your department at risk for claims of sexual harassment by socializing with an alleged victim of a crime reported to the ORPD,” it continued.

Police Department spokesman Darrell DeBusk said there had subsequently been repeated but unsuccessful efforts to locate the complainant.