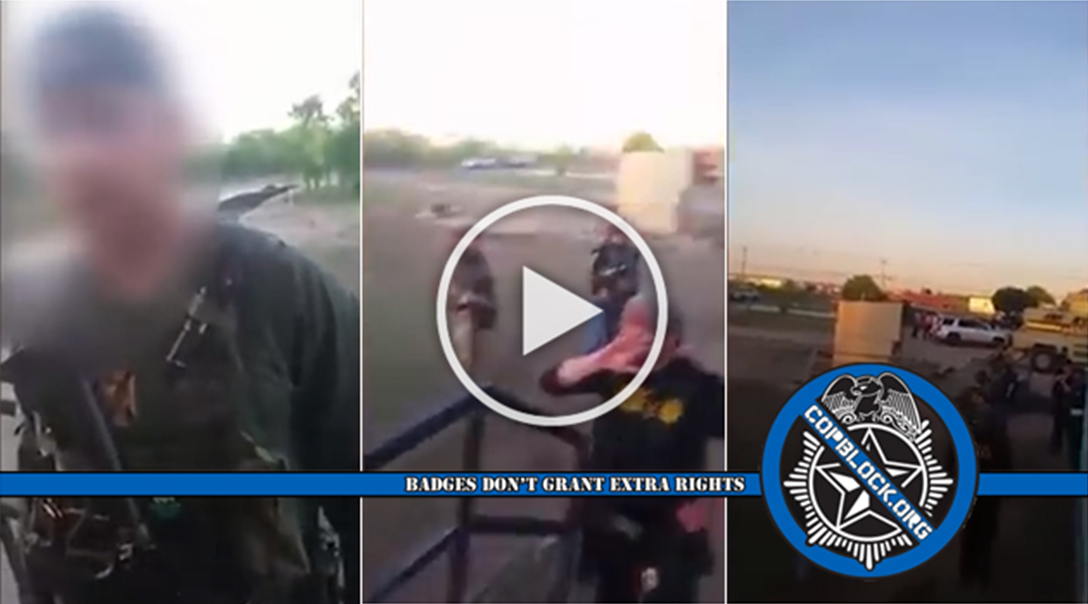 In a glorious exemplification of how shining a light on cockroaches makes them scurry back into the dark corners from whence they came, video of a May 5 incident shows a man standing down an entire DEA SWAT team.

Recorded in Odessa, Texas by a man who wishes to remain anonymous, the one minute clip shows the man give a group of warrior cops adorned in military style uniforms and tactical gear a tongue lashing they will not soon forget.

“I was rudely awoken by all this group of fucking gentlemen right here,” the man says in the video panning around to record the officers. “No search warrant.”

“What’s your name boss?” the man asks one of the cops. “Border Patrol? Fucking Border Patrol raiding my house?”

“We didn’t go inside your house,” the officer says.

“Dude you’re on my property boss… you better get the fuck outta my property right now,” the man commands. “All yall. Yall fixing to go on fucking Facebook. All yall without a fucking search warrant.”

The footage then shows the officers cowering away with their tail between there legs, some hiding their faces while others flip the man the bird.

“You flipping me off? Fuck you too bitch, you’re being recorded,” the man says. “Yall come and wake people up for no reason man.”

According to reports, DEA agents being assisted by the Ector County SWAT had executed a search warrant at a nearby house on Tripp Avenue and then moved to another home in relation to the same investigation.

That’s where they received the smack down from the unidentified resident after asking him if they could search his home without a warrant.

“You come to my house waking me up like that, automatically that’s going to piss people off,” the man said. “They started banging on my door. I just didn’t appreciate that. That’s not professionalism. I just didn’t like the way they did it.”

The DEA released a statement regarding the incident simply stating that the man “was uncooperative with the agents so they departed the premises without incident.”