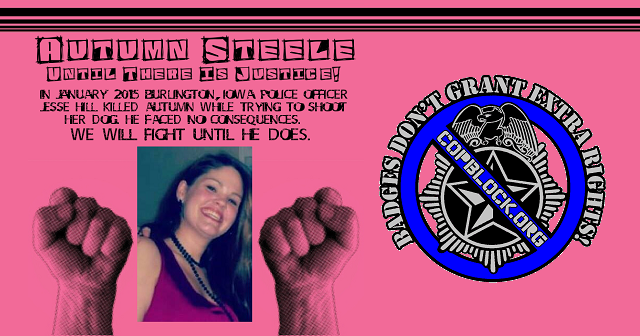 On Saturday June 18th CopBlock Network contributors and the friends of Justice for Autumn Steele will be hosting a rally at the Steamboat Days festival in Burlington, Iowa. The festival includes live music by major acts as well as a number of other activities and draws out a large crowd. So for the second year folks will gather to spread the word of Autumn’s unanswered homicide by Burlington PD officer Jesse Hill.

On the day of the rally we will gather together in front of the Burlington Police Department at 6:00 PM and shortly after will march together down to the waterfront area where events are taking place. Five Finger Death Punch will be taking the stage at 8pm, so we will be there beforehand to talk to concertgoers making their way in to check out the internationally recognized and well loved hard rock act. We also plan to wear #JusticeForAutumnSteele shirts, carry signs and hand out information and t-shirts to interested folks. To help pay for those materials and others to be used during this and future events, we have started a GoFundMe account. The CopBlock Network has already provided $120 to the event from its base of CBN donors. This is a great example of the CopBlock Network using your donations directly to fight the police state and bring justice to its victims and their families.  Other donors have also already shown great generosity. Every little bit helps, so if you have a few extra bucks and a heart for justice, please consider donating.

The goal of this rally is to spread information about the unnecessary death of Autumn and other victims of unwarranted police violence and killing. This will be accomplished simply by talking with people who may not have heard about these incidents or were misinformed about them by authoritarians and mainstream media. We encourage and expect all of those who join us to act peacefully, respectfully and within the limits of the law.

Check out the
Autumn Steele Until There Is Justice Steamboat Days Gathering
event page on Facebook.

If you are near the SE Iowa area we hope you can join us for the event. If you cannot join us but want to help you can donate to the fund above and/or help us spread the word like wildfire on Facebook and elsewhere in social media.

In the above video Jesse Hill and his friends are flashing gang signs. He was eventually able to secure a career with the most notorious gang in his area where his theft and violence would be praised rather than punished.