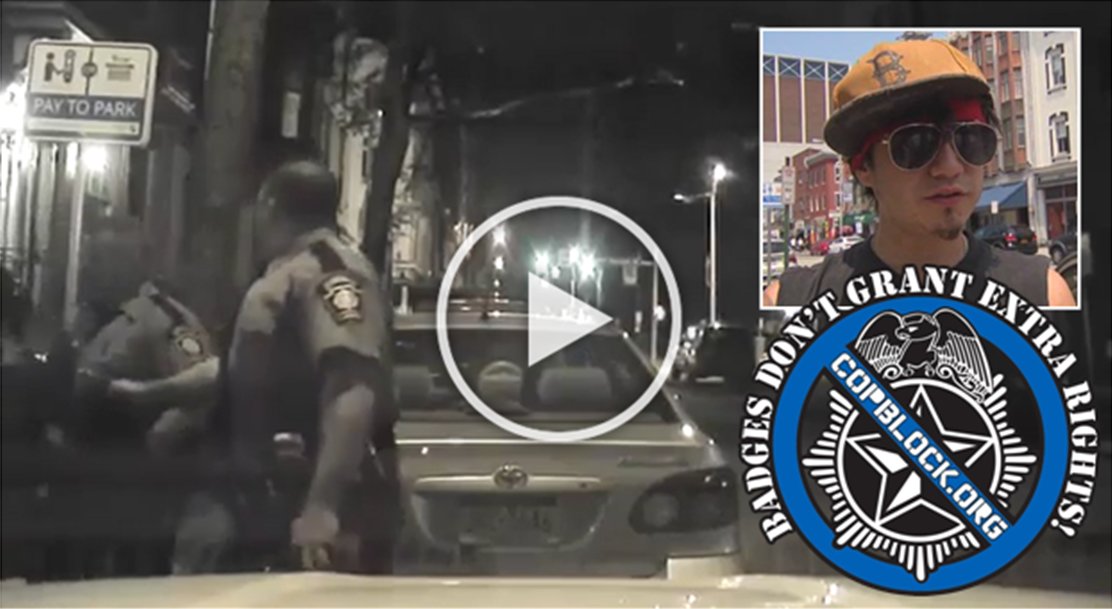 Dash-cam video showing a Pennsylvania state trooper kicking a handcuffed and defenseless man in the face, was released by prosecutors on Monday.

Trooper Ryan Luckenbaugh was arrested in February on two counts official oppression, one count simple assault, and a summary offense of harassment after he was accused of assaulting skateboarder Chris Siennick during an arrest on May 16 of last year.

Prosecutors said Luckenbaugh kicked the 25-year-old in the face, “causing his head and body to recoil backwards” when he was cuffed with his hands behind his back sitting on the corner of Second and Locust Streets in Harrisburg.

The actual strike was not caught on Luckenbaugh’s body-cam because it occurred below its line of sight but the new dash-cam footage shows the trooper raring back and delivering a kick to Siennick off screen.

In the video, Siennick can be heard arguing and cursing at the officers and comparing them to Imperial Storm Troopers after they walk him up a sidewalk to the front of a police car. The cops said he allegedly spit at them from the ground which the footage appears to corroborate.

This resulted in Luckenbaugh kicking Siennick in the face as another trooper can be heard saying, “No no no no no.” After kicking the skateboarder, Luckenbaugh is heard telling him, “Why don’t you take that? Spit on that.”

The troopers then deride Siennick for being a “pot-stirrer” and “local anarchist” before one of them relays their version of events to some local officers.

During the initial investigation, Harrisburg police officers present during the incident bared witness and crossed the blue line of silence by telling investigators “the kick was neither reasonable nor justified given the circumstances.”

Siennick had conceded that he had flipped the cops off after they called him a slur as they passed him on his skateboard in their cruisers at around 2 a.m., but asserted that other claims made by the troopers were false.

The officers had said Siennick became belligerent and yelled profanity at them as they stopped and attempted to arrest him, and claimed that he threw his skateboard at their patrol car and spit at them then. According to court affidavits however, no evidence exists to support those claims.

“I didn’t spit at their car. I didn’t throw anything at the car,” Siennick said. “That’s something they really tried to stick in with my initial arrest record. It didn’t make any sense then and it doesn’t make any sense now.”

Siennick faced numerous charges after the arrest and spent three weeks in the Dauphin County jail. After prosecutors saw video of what occurred however, all charges against him were immediately dropped and he was released.

On Monday, the Dauphin County district attorney’s office said the video proves Luckenbaugh lied in police reports when he said Siennick hit the patrol car with his skateboard and a judge ruled that the suspended trooper will proceed to trail on June 17 for his charges.

Siennick continues to pursue a federal civil lawsuit against the troopers and says he was also tased and pepper sprayed during the incident. He is seeking monetary damages.