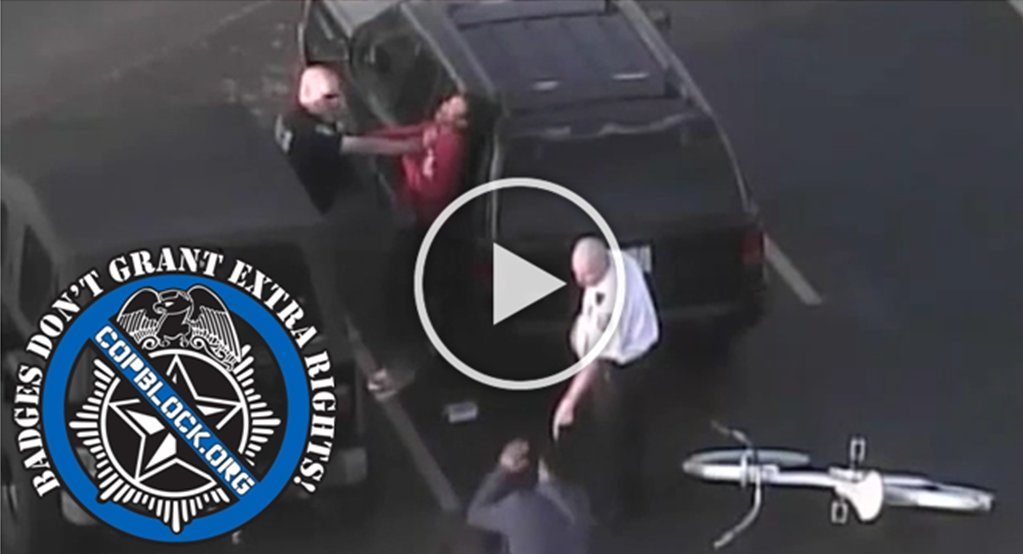 Legal action is being taken after a video showed a Tacoma, Washington police officer confronting and then attacking a 15-year-old girl for doing nothing more than riding her bike through a mall parking lot.

According to a lawsuit filed against officer Jared Williams, the Simon Property Group who owns the Tacoma Mall, and Universal Protection Services, the private security company in charge of Tacoma Mall security, Monique Tillman had went bicycle riding with her brother Eric on May 24, 2014.

They had visited a used clothing store where they sold some old clothes and then grabbed some burgers and fries. The two then rode their bikes home, and on the way, cut across the Tacoma Mall parking lot. They had taken the short-cut in the past but this time, there would be trouble.

Surveillance footage shows the children riding through the parking lot with a Mall security vehicle driven by officer Williams close behind. Williams, who was off-duty working as a security officer, was dressed in his Tacoma police department uniform fully equipped with all his police gear. The teens are seen on the video stopping when Williams orders them to do so before Monique begins arguing with the officer about why the two were stopped.

The lawsuit says Williams told the kids that they were causing a disturbance and were about to be “trespassed” from the mall. In response, Monique attempted to tell Williams that she and her brother were on their way home but the officer wouldn’t listen.

Williams is seen in the footage pulling out a pad in an apparent attempt to take down the teen’s information before she shifts on her bike in a tacit move to roll away. As a result, Williams slings the 15-year-old off her bike before grabbing her by the throat and pinning her up against a parked vehicle.

The teen attempts to resist the assault so Williams then wrestles around with her until he takes hold of her hair and whips her to the ground. As Monique’s brother Eric objects from the sideline, Williams deploys his taser, shocking the teen, and she is handcuffed and charged with resisting arrest and assault on a police officer.

According to police reports following the incident, Williams claimed the teens were cutting off cars in the parking lot, swearing and yelling at people who honked at them, and maintained that the mall wanted them stopped and given a trespassing notice.

Attorneys for the teen said Williams abused his authority as a Mall security worker but Tacoma police department public information officer Loretta Cool said even though the cop was off duty and paid by Mall, “he’s a police officer.”

Unbelievably, a department investigation into William’s use of force determined that he could have used more force on the girl than he did when she resisted with Cool saying it looked in the video like he was going easy on the her.

“I did have a bit of an attitude, but that’s because it was a waste of my time. I hadn’t done anything wrong,” Monique said. “He was just pulling my hair and like he was trying to slam my face into the ground.”

The lawsuit says all of the charges against the teen were ultimately dismissed and seeks damages for the violation of her civil rights. Cool and Tacoma police have offered no further comment on the case citing the pending litigation.

“A child riding a bike should not have to worry that a police officer will stop her without legal cause and brutalize her,” Monique’s attorney, Vito de la Cruz said. “Our communities are weary of another African American child being hurt by unwarranted and excessive police force.”