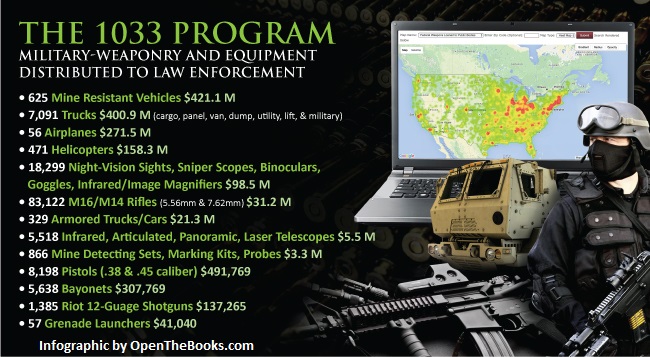 The federal government has transferred around $2.2 billion worth of military gear to local police departments around the country since 2006, according to a new report.

Released by the non-profit government transparency group Open the Books, the report, titled The Militarization of Local Police Departments, says the equipment includes “helicopters and airplanes, armored trucks and cars, tens of thousands of M16/M14 rifles, thousands of bayonets, mine detectors, and many other types of weapons.”

According to the report, which is based on data compiled from Freedom of Information Act requests, items sent to park districts, forest preserves, hometown police departments, junior colleges, universities, county sheriffs, natural resource and public safety departments, and state police include:

Virginia, Arizona, Tennessee, California, and Texas all received more than $100 million worth of surplus military equipment between 2006 and 2015, but the state that received the most was Florida – which obtained over $300 million worth. Additionally, some of the notable findings in the report include:

In May 2015, President Obama announced reviews of police use of military equipment after signing an executive order that went into effect this year meant to better coordinate federal support for the acquisition of certain federal equipment by state, local, and tribal law enforcement agencies.

The order established an interagency Law Enforcement Equipment Working Group with the stated purpose of helping to ensure law enforcement agencies adopt organizational and operational practices and standards that prevent the misuse or abuse of controlled equipment and enforce civil rights requirements resulting from receipt of federal financial assistance.

“It’s no secret the American people are distrustful of our political class, and rightly so,” one of the authors of the report, Adam Andrzejewski said. “But transparency can help restore trust by giving people the information they need to hold elected officials accountable.”