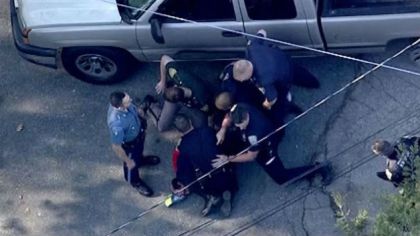 In a shocking story that broke just hours ago, a man was beaten senseless on live TV!

A 50 year old man led police on a chase for a few hours before he decided that enough was enough and pulled over to give up. The news cameras on scene captured the man pulling over and putting his hands outside the window. He then followed orders to lay on the ground. The shocking gang beating that happened next is hard to describe. Watch the video to judge it for yourself.

A man was taken into custody Wednesday afternoon after leading police on a high-speed chase that ended in Nashua, New Hampshire.

The chase started in Holden, Massachusetts and then ended in Nashua, New Hampshire. The man was driving a gray pickup truck that appeared to have significant damage on the driver’s side after the chase. The truck’s two back tires were also lost during the chase.

After the chase, the man opened his door, got on his knees with his hands up and then got on the ground, appearing to surrender. Officers could then be seen swarming the man and throwing punches while the man while he was on the ground. (sic)

7News has learned that the suspect is a 50-year-old man from the Holden, Massachusetts area. The suspect apparently was known to police and several outstanding warrants for larceny, assault and battery with a dangerous weapon and failure to stop. It is not known yet why police were chasing him on Wednesday.