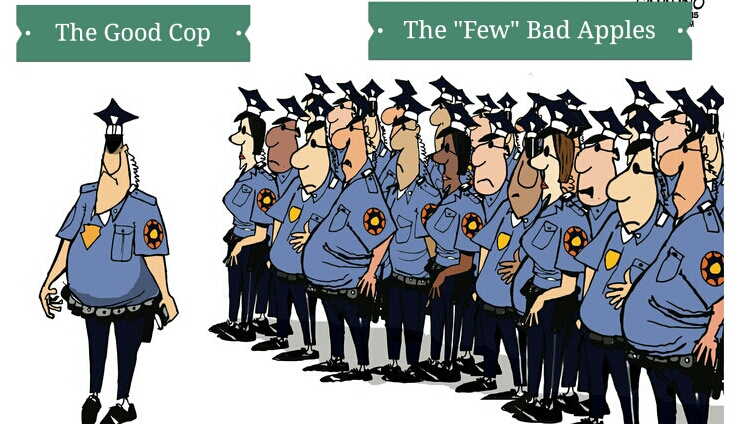 This is the first article in a series for National Police Week.

National Police Week (May 15-21 this year) is an annual event where police officers honor their fallen comrades and celebrate their dedication to upholding law and order by drunkenly running amok in our nation’s capital.

It also provides a timely opportunity to reflect on what it means to be a good cop. Aside from those who make the ultimate sacrifice in the line of duty, surely the good cops are the ones who go on to have long lucrative careers in law enforcement, unmarred by serious disciplinary action, and who enjoy the esteem and protection of their fellow officers.

Our first shining example of a good cop who went above and beyond the call of duty is Barry Washington, who can even count a congressional tribute amongst the many accolades he received for his work as a tireless drug war crusader. Washington left a long, legendary career as a state trooper because he felt called by God to start a pioneering civil asset forfeiture program in small town Tenaha, Texas. During Washington’s tenure as Deputy City Marshal, Tenaha seized $3 million from motorists in at least 140 cases between 2006 and 2008. The motorists were persuaded to surrender their cash and other valuables under the threat of money laundering charges, and in some cases, losing custody of their children. A class action lawsuit against Washington and other officials involved in the highway robbery scheme was settled in 2012.

There’s also Anthony Raymond, a former police officer with the Nassau County and New York City Police Departments, who was decorated with at least 50 commendations and retired with a $123,303 annual pension in 2012. During his 29 years of dedicated service, he was also the subject of nearly 40 civilian complaints, and 5 lawsuits for use of excessive force and civil rights violations, 2 of which cost New York taxpayers a combined total of more than $3 million. In a 1995 incident where he was cleared of wrongdoing, Officer Raymond shot Christopher Wade to death, firing so many times that he had to stop and reload his gun.

Perhaps a better example is Officer Gildardo Sierrra, who has been with the Chicago Police Department since 2002. Some of the highlights of Sierra’s career include shooting three men, two of them fatally, in separate incidents in January, March, and June of 2011. In the June incident, he shot 29-year-old Flint Farmer 7 times after “mistaking” his cell phone for a gun. The final 3 shots, fired into Farmer’s back as he lay on the ground, were the fatal ones. The Cook County Prosecutor’s Office declined to press charges, because “not every mistake demands the action of the criminal justice system.” The city settled a lawsuit over Farmer’s death for $4.1 million. In 2016, a lawyer for the city resigned after a judge ruled that he had hidden evidence during another wrongful death lawsuit brought by the family of Darius Pinex, the man killed by Sierra in January, 2011.

Officer Sierra remains on the force, and the most recent payroll data shows his salary as $78,012 a year. The Citizens Police Data Project shows 9 complaints of misconduct against him.

These are just a handful of some of the most egregious cases of police misconduct and abuse, but all too often police officers who run afoul of the oaths they swore to obey, rather than having to face a reckoning for their bad acts, are protected and held blameless by their commanders and fellow officers, prosecutors and judges, and even a good portion of the public.  Perhaps the definition of what it means to be a good cop looks vastly different depending on what side of the thin blue line you are standing on.

The next few posts in this series will examine the cases of several good cops in the traditional sense— officers who didn’t turn a blind eye to injustice and took action to protect the innocent. In the meantime, share your stories about “good cops” behaving badly on Facebook and Twitter using the hashtags of #NPW16 and #NationalPoliceWeek.

Be sure to read the other articles in the series: