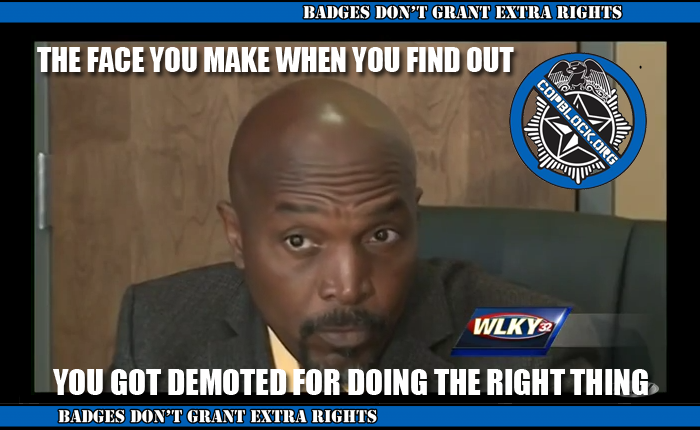 Our second Good Cop of the Day is Officer Barron Morgan from Louisville, Kentucky. In 2012, when he was a narcotics detective with 18 years of service with the Louisville Metro Police Department, Officer Morgan heard a suspect confess to a murder committed back in 1998. Getting a confession on a cold case doesn’t seem too out of the ordinary for police work, except this was no cold case. A woman named Susan King had already served 6 years in prison for a murder she had no involvement in.

Officer Morgan brought the confession to his superiors in the attempt to get them to reopen the investigation. Once he realized they had little interest in revisiting the case, he contacted the Kentucky Innocence Project with information about the new confession.

While the commanding officers at the LMPD and also the Kentucky State Police were unconcerned with new developments in an old murder case, they were highly concerned about Morgan’s contact with the Innocence Project. They launched an internal investigation and even falsely accused him of violating the chain of command by seeking to exonerate an innocent woman:

According to court records, their initial reaction to Morgan’s inquiries centered on how upset state police were with the city detective.

LMPD Major David Ray was among Morgan’s more vocal critics in command, suggesting early on that disciplinary action against the detective was warranted.

“Off morgan (sic) may also be making more of this than is really there,” he said in an e-mail obtained by WFPL.

Ray had also apologized on the city’s behalf to a KSP commander for “Morgan sticking his nose in this.”

In a June 2012 e-mail, Ray, who oversees the major crimes division, said another state police commander had called concerning Morgan “interfering with their old homicide case.”

“I got the impression that this is causing some hard feelings with KSP and possibly damaging our department’s relationship with them,” Ray wrote.

Before that, Morgan alleges in the whistleblower lawsuit that LMPD Lt. Colonel Kenton Buckner cursed him out in a voicemail for sharing information with the Innocence Project. Morgan further alleged that Buckner said the non-profit group was on the “other side” and ordered the detective to stop sharing information.

Under the pretext of a department restructuring, Morgan was demoted from narcotics detective to night patrolman on the graveyard shift.  He settled a whistleblower lawsuit against the Louisville Metro Police Department for $450,000 in 2014.  Susan King was exonerated and released from prison.

Be sure to read the other articles in the series: