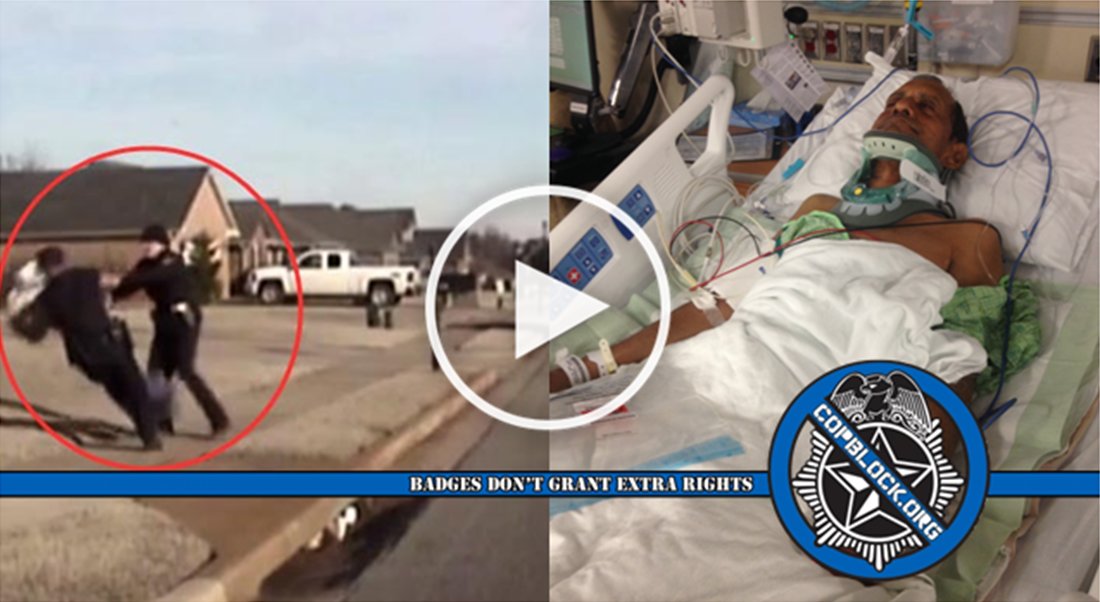 After a federal judge threw out a case against a Madison, Alabama police officer filmed paralyzing a man by slamming him to the ground, state prosecutors have now dropped their case against him as well.

Officer Eric Parker was facing up to 10 years in prison after he responded to a call on Feb. 6, 2015 about a suspicious person walking on Hardiman Place Lane. The caller said he had seen the man before and was nervous about leaving his wife home alone in the neighborhood.

Sureshbhai Patel, who does not speak English, had arrived in the country about a week earlier. His son, Chirag Patel, is an engineer for a government contractor.

Chirag Patel said his father had received permanent resident status and had come from the Indian town of Pij to help care for his 17-month-old grandson. He said his father liked to take walks in the morning and was doing so when he was attacked by Parker.

Video from a dashboard camera shows Parker and another officer confront Patel – who was merely walking on the sidewalk outside his son’s home – before Parker can be seen slamming the 57-year-old to the ground.

Following the incident, Madison police called paramedics but Patel was left partially paralyzed. He was transferred from Madison Hospital to Huntsville Hospital where he underwent spinal surgery.

“He was just walking on the sidewalk as he does all the time,” Chirag Patel said. “They put him to the ground.”

Patel was not charged with any crime following the incident and Parker was suspended while the Madison Police Department investigated his use of force. In March 2015, the officer was federally indicted for “deprivation of rights under color of law.”

Patel’s attorney also filed a federal civil lawsuit against Parker and the City of Madison that has been on hold pending the outcome of the cop’s criminal proceedings.

In January, Judge Madeline Hughes Haikala threw out the federal case against Parker, and filed a 92-page opinion, that ended with her stating: “The government has had two full and fair chances to obtain a conviction; it will not have another.”

Prosecutors had already tried Parker twice with each ending with a deadlocked jury. At the end of the second trial on Nov. 4, the officer said he thought Patel had a weapon and was “going for it” – and his defense attorneys argued that the government had failed to support the civil rights charge and moved to acquit.

Judge Haikala had not ruled for more than two months until federal prosecutors filed a motion arguing against acquittal. Haikala took swift action in the face of the motion and struck the case down completely.

Parker still faced a state charge of misdemeanor assault in Limestone County that carried up to one year in prison, but on Thursday, Alabama prosecutors decided to drop that case as well.

“Without a doubt this is an unfortunate case and we agree with U.S. District Judge Madeline Haikala,” Alabama Attorney General Luther Strange said. “After a review of the federal trial testimony, it does not appear that there would be sufficient evidence to prove the case beyond a reasonable doubt.”

Consequently, the only person to be found guilty of a crime in the case is Madison Police Chief Larry Muncey, who took up for Patel and maintained that Parker should have been fired because he had no cause for the stop or assault.

Muncey was found to have communicated with witnesses during the first trial of the federal case by sending emails asking some of his officers why they had testified that the takedown conformed with department policy.

The chief had said it was his duty to correct his officers and was found guilty last month of criminal contempt of court. He was fined $2,500 and continues to be on administrative leave while he appeals the ruling.