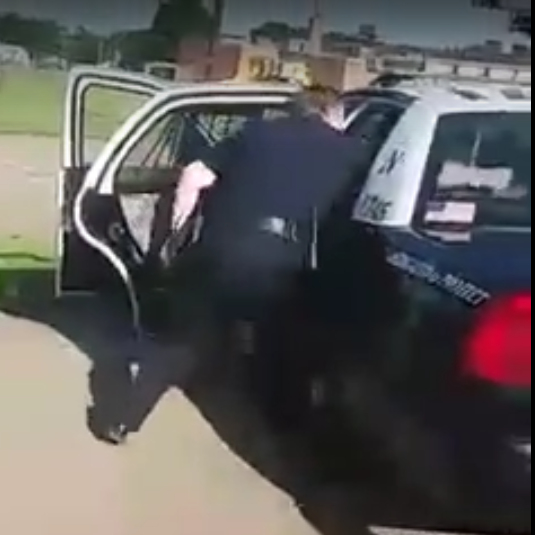 Normally I wouldn’t post a video of what might be perceived as “mutual combat”, but there is a lot going on under the surface here. To look at this as just a mouthy kid getting what he deserved oversimplifies this, and trivializes what this “seasoned” officer resorted to. This Ft Worth cop is supposed to be the one in control.

Officer Lawson is a 24 year veteran of the Ft. Worth police department who was called to the Diamond Hill Community Center by its director over kids being….well, kids. When Officer Lawson arrived the previous day, a group of kids scattered. Upon arrival on this day, he detained 19 year old Paul “Ray” Aleman believing he was one of the “kids” causing problems from the previous day. He was detaining him so he could get the director of the center to come out and criminally trespass him from the facility.

Now, isn’t this the kind of place where you would WANT kids to be instead of out in the community possibly causing bigger problems? Sure, things get out of hand sometimes, but is the best solution to immediately trespass them from the facility and limit their options?

This is where I think an obvious breakdown between the police and the community has begun. It seems that they no longer see themselves as those who “protect and serve” the community, but to be the bearer of swift and harsh treatment to anyone who ventures from their own perception of normalcy. They aren’t interested in working with the community to make things better. They seem to think punishment is the only solution anymore, and if you you don’t bow to their orders, purgatory is somehow a good thing.

Did this “seasoned vet” believe being the big bad cop being scary would someone snap the rest of the youngsters in line? This isn’t 1950’s rural America you’re dealing with. This kind of behavior only breeds contempt. Now, instead of serving some righteous justice on some kid you perceived as being “bad”, you not only sent him into the community without a good outlet, you have set the greater young community off feeling more disdain for your badge then they may have already had. Is this what police work has come down to?

We can’t continue to beat down the youth in society, and expect that to ultimately make them respect authority. These aren’t the hardened criminals that you somehow believe can be whipped into shape. These are kids that need to learn that the badge is not their enemy. There is no question that there should be consequences for actions, but not everything is a punishable offense.

Think about it like you would think about your own kids. Would they have ANY respect for you if you punished them for every single thing they did wrong? Some things are great learning experiences in themselves, punishment is not required when a lesson is learned.

Remember, respect is something that is earned. Do the best kids come from an environment where they are never allowed to ever make a mistake without being banished to purgatory, or from a balanced environment where it’s understood that bad choices will be made and dealt with reasonably instead of through violence.

Maybe I’m just too old to understand anymore. Maybe there is no hope for the future, and the youth today are just too bad to deal with reasonably.

People are generally a result of their environment. If the police want to continue to contribute to that negative, violent environment with even more negative, violent behavior, then they will continue to see more of the negative backlash. This cop chose to be harsh, and punitive. Perhaps a little adult perspective could have defused the situation, and given all of those kids a positive influence. Hell, maybe they would even learn to look up to the local law enforcement instead of fear it.

But then….this IS the same police department that pepper sprayed a group of motorcycles on the highway.