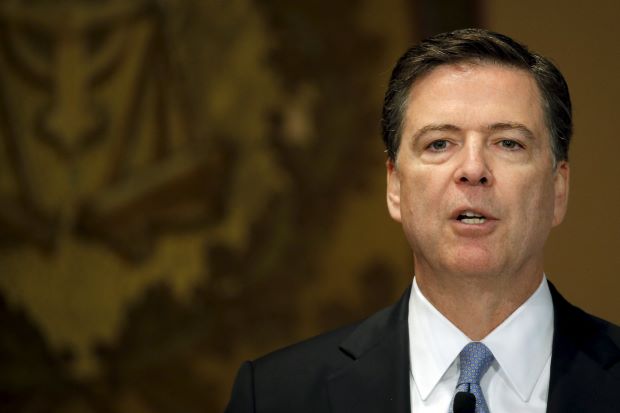 On Wednesday, at a University of Chicago law forum, he said that this “Era of Viral Videos” makes police anxious, which allows people to commit more crimes. He said that police around the U.S told him that they are afraid that people are filming them, and that they will sometimes not get out of their cars, or treat the suspects differently than if they were not filming them.

Amnesty International USA executive director Steven W Hawkins said that Comey shouldn’t have made the claims without evidence, and that there should be a statistical review of lethal force laws by police. Hawkins said, “The assertions made by Director Comey are outrageous. By his own admission, these statements are not backed up by data, and there are mixed reports about levels of crime since the heightened scrutiny of police officers began after the protests in Ferguson.”

“Rather than making unsubstantiated claims that hinder dialogue and constructive criticism of police practices,” Hawkins continued, “what is urgently needed is an official collection and publication of nationwide statistics on the use of force by police.

“We also need President Obama and the Department of Justice to support the creation of a national commission to conduct a nationwide review of police use of lethal force laws, policies and training and practices, as well as a thorough review and reform of oversight and accountability mechanisms.”

Comey said that there could be other reasons for the increase in crime, but that he was most likely correct about it. He went on to say that the nation currently cares a lot about the use of lethal police force, and that we must discuss when it is appropriate, and when it is not.

Comey went on to suggest that mass incarceration does not exist in the U.S (even though we can see that the war on drugs has caused it.)

He is essentially saying that filming police committing crimes creates more crimes. Unfortunately, as more legislation against people filming police is enacted, he very well may end up correct, but not in the way that he thinks so.

How would these cops have been held responsible for THEIR crimes if no one filmed them committing them:

These are just a couple of examples showing that police can abuse the power given to them, and showing why people should film the police.

For the record, James’s own FBI released statistics proving his claims wrong a few years ago:

According to new FBI statistics released this week, violent crime rates in the US fell over 4% in the past year alone, bringing the amount of violent crimes lower than it has been in nearly 40 years. The statistics showed that there were an estimated 1.16 million violent crimes in the year of 2013, which is the lowest number since 1978, when 1.09 million were recorded.

I am the founder of anarchfree.info. I am an anarchist, a capitalist, and a Voluntaryist.