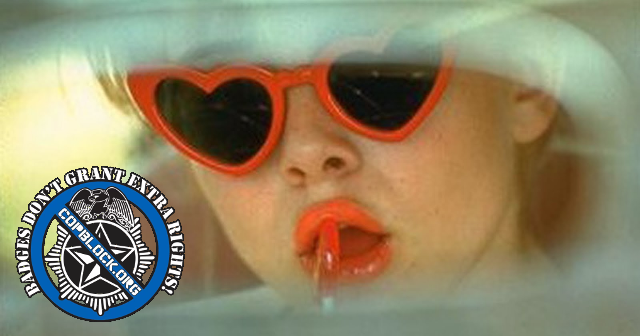 Last week the story of a sex scandal involving a teenage girl and an unknown number of Oakland, California police officers caught a lot of public attention. I covered the story here at CopBlock.org and it received quite a bit of feedback. And while the predictable outrage junkies all did what they always do, which is to become as ridiculously defensive or offensive as possible, most everybody failed to miss what was really wrong with that scenario. The reason that this was happening, in part, is because cloudy thinking about statutory rape laws was preventing any critical thinking.

So despite the fact that I know that every rabid syCOPhant and CopBlock hater, and especially those who revile me specifically, are going to twist everything I say into some knee jerk accusation that they will be inordinately proud of – I am going to ask the rest of you to explore with me what we think we know and what we actually do and do not know.

The few of you whose thinking is evolving along with the activists you read here at CopBlock.org make it worth exploring complicated issues despite the predictably disastrous response potential. But the thoughts and opinions in this article are mine alone, and not the opinion of any of my amazing colleagues.

What determines when a human being has reached the stage of development necessary to consent to sexual activities with their partner of choice?

All throughout nature, a species who has reached physical sexual maturity will begin participating in mating rituals. Humans are unique in having evolved a set of arbitrary principles that determine when this change into a sexual being takes place. This has not necessarily been the case in all cultures throughout time. Even western culture saw girls only a short distance removed from their first sign of ovulation begin marrying and bearing children just a few hundred years ago, and even more recently in some places. Yet, because we have a pattern of establishing some kind of arbitrary designation in these matters, we must consider that nature alone is no longer the sole determining factor in these affairs. Yet neither are arbitrary boundaries realistic considering the profound difference between individual human beings.

The laws governing statutory rape are as arbitrary as can be. It assigns a specific date to maturity, which has never actually been the case with any individual in history. We all mature differently, and in different ways. It happens at various rates and in no particular order for every single person. Not only is it intellectually impossible set an arbitrary age for when maturity has been reached, it is dangerous to believe that it is ever reached at all. One of the most frightening parts of the world are people who are frozen for life at the intellectual and maturity level of late adolescence, which is already far too prevalent. We should aspire to mature emotionally and intellectually all throughout life.

Does a recognition that adolescents are often emotionally and intellectually immature today mean that human beings are naturally immature until a certain physical age as a law of nature, or that cultural forces are arresting human development to create self-fulfilling prophecies?

The concept ‘teenager’ is a pretty recent one. Here is a tagline from the outstanding documentary film Teenager by Matt Wolf, adapted from the book of Teenage: The Creation of Youth Culture 1875-1945 by Jon Savage:

Teenagers didn’t always exist. They had to be invented. As the cultural landscape around the world was thrown into turmoil during the industrial revolution, and with a chasm erupting between adults and youth, the concept of a new generation took shape. Whether in America, England, or Germany, whether party-crazed Flappers or hip Swing Kids, zealous Nazi Youth or frenzied Sub-Debs, it didn’t matter – this was a new idea of how people come of age. They were all “Teenagers.”

As the push towards compulsory schooling was met with child labor laws, and a desire to preserve jobs for able adults became social norms, those adolescents who were formerly considered adults in almost all regards were now placed in an era of limbo. This also created a leisure class which made a welcome demographic in a growing economy. Teenagers spent money. The culmination of consumerism and mainstream culture geared towards this age group in the decades following WWII was rock and roll music and culture. It was able to finally express the angst of those caught between two worlds.

That angst also began to manifest itself in the form of the obstinate teenager. Stubbornness is the only resort for those caught between a rock and a hard place.

“What are you rebelling against?” – “What do you got?”

So perhaps we should say that most humans are no longer intellectually or emotionally mature enough to grant consent to sexual activities with the partner of their choice as they once might have been at an earlier age. Yet that immaturity is a human construct, not a natural law. And in a time where immaturity is omnipresent, displayed proudly and gregariously by adult celebrities and politicians who profit from an image steeped in juvenile drama, perhaps we should examine the consequences suspending adulthood for ulterior purposes. And even if we cannot turn back the clock, we should be careful that it is not always being set ever forward until ‘society’ deems us wards of an authority figure(s) for life.

The current laws regarding consent contain a fatal flaw in their logic. This is especially apparent in statutory rape laws. The entire premise is that the ‘victim’ is able to give consent to sexual activity, but only with partners within an arbitrary range of physical age. Because their consent is recognized yet limited it puts the law in the awkward position of expressing the same sentiment as rapists – your consent does not matter.

Statutory rape laws deny the agency and will of the individual, which is what a rapist does. This is an unavoidable conflict of the logic inherent in statutory rape laws. And so when critics of my Oakland article accused me of ‘blaming the victim’ because I questioned the wisdom in her choice of sexual partners, what they were really saying is that Celeste Guap’s consent doesn’t matter a single iota to them.

It is pretty clear that Celeste is having a pretty good time with her sexuality. She hardly comes off as a victim. In fact, after my article, she made a Facebook post demanding the media give her ‘RESPECK’. Well, I do respect her ability to make choices about her sexual activity better than myself or anyone else. And as a consequence, I see nothing wrong with the involvement of older men she has chosen as sexual partners. Except in this case, those men were cops.

These men go out into our world every day and shove thousands of arbitrary laws like road spike strips into the lives of peaceful citizens. If you are going to terrorize the populace with an impossibly complex code of arbitrary infractions, you better best follow them to the ‘T’ yourself. This is what is disgusting about the Oakland officers. Not that they had sex with an attention starved young lady who seemed to enjoy the experience as much as they did, perhaps more. The problem here is the hypocrisy and double standards. Those are what should concern us. And not just that it happened in Oakland, but because it is pretty much the gold standard in police culture nationwide.

I don’t know exactly how to decide when somebody else is mature enough to give consent, and neither do you. Even the people who should be helping individuals to make that decision, the parents, have to work past their own images and biases and cannot be completely fair in their assessment most of the time. Yet I suspect that if you raise your kids right, you will be able to trust the choices they make as they fumble awkwardly through their lives. Which is what we are all doing, all of our lives, anyhow.

What I do know is that there are increasingly a lot of public opinions about something entirely individual, a person’s sexual identity, orientation and ideology. It is creating a climate of divisiveness and hatred, and sexual accusations and mania have created a new witch hunt. It is dangerous when we become driven so passionately in self-righteous absolutes that even a mere accusation essentially becomes judge, jury and executioner. A rebirth of puritan ideologies is currently coalescing in a period of rapid exponential evolution of humans. There are 7.5 billion humans now, and growing quickly. You think people are getting weird now? We will likely appear to those a few generations into the future as aboriginal people seem to us.

We have to turn the fear and the hate down. We cannot lose sight of more important obstacles humanity currently faces in a pointless McCarthy era witch hunt for sexual deviants. Such behaviors tend to bend ideologies and laws towards the creation of new forms of deviancy to be hunted out. It is a dead end road to our own oppression. And it is a distraction from the most important issue of all. The authorities are psychotic hypocrites playing us for fools, as they commit the crimes they claim they are protecting us from, while almost completely incompetent at even making a convincing display of doing so.