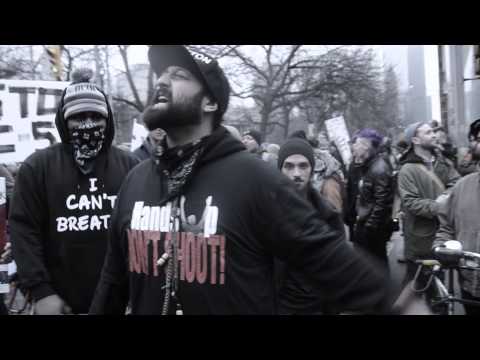 In a stunning show of protest, five activists recently staged a full hunger strike outside a San Francisco police station. The so-called Frisco 5 hopes to compel an end to city injustice, as well as the police chief’s resignation. Determined as they were, Frisco 5 was forced to suspend their hunger strike due to health concerns. Still in the fight, they proclaim the movement is far from done.

Frisco 5’s four men and one woman have really been shaking the hive lately. Despite increasing media attention, police Chief Greg Suhr ducked and dodged the collective since their first day of protest. Suhr even went as far as to cancel a planned meeting with public defender Jeff Adachi, a day after protests began. The meeting, NBC Bay Area News reports, was part of a public forum on police reform. San Francisco PD, in an email explanation, claimed “security concerns” provoked Suhr’s absence.

The police chief’s actions speaks volumes, considering the hunger strikers were then wheelchair-bound and unthreatening. Although some protesters grew increasingly rowdy, this doesn’t explain Suhr’s utter reluctance to communicate directly with Frisco 5. Undeterred, Frisco 5 marched outside Mayor Ed Lee’s office chanting “fire Chief Suhr”, joined by hundreds of others. Recently, Lee proposed to spend an additional $17.5 million instituting police reforms. Lee was reputedly absent on business the day of marches outside his office, so protesters kept up the pressure.

Lee ultimately gave Frisco 5 little attention, and isn’t necessarily interested in Suhr’s removal. Other politicians, like San Francisco supervisor Jane Kim, more so sympathize with protesters. Kim became the first high ranking politician to call for Suhr’s removal, reaching out directly to the Mayor’s office. “I believe we could do worse than Chief Suhr”, says Kim, “which is why we must begin this process at once.” Kim’s interest is in seeing the next chief “lead our department, reform it and do so in a way that rebuilds the community trust so vital in public safety.”

Understandably, police spokespeople have relayed Chief Suhr’s reluctance to relinquish power. In a phone conversation with Frisco 5, Mayor Lee even expressed concern that calling for Suhr’s resignation may delay proposed reforms. Amongst the group was underground San Franisco rapper “Equipto”, who brought a notable amount of attention to the movement.

On the sixteenth day of protest, shortly after talking to Lee, all members of Frisco 5 were hospitalized due to their declining health. The following day, their hunger strike was suspended, so that they may survive and continue to push for reform. Still, Chief Suhr refused to appear before or communicate with the group.

What amounted to one of the longest hunger strikes in city history has catapulted the area into a legitimate movement. Even as the original protesters undergo a lengthy hospitalized recovery process, hundreds carry on marches downtown. “Please continue showing support”, Equipto said in his final address, “this is just the beginning.”

Over 1,200 people died by police hands in 2015, New York Daily News reports, and San Fran PD isn’t exempt. This body count, however, has failed to translate into a single conviction, moving activists to respond. Frisco 5’s grievances reach beyond excessive violence, spotlighting an overall problematic police culture. More than once, San Fran officers have been caught sending racist, sexist, xenophobic, and homophobic text messages. As part of it’s state-to-state sweep, the Department Of Justice is probing Suhr’s department and it’s practices. Frisco 5’s efforts can be followed on twitter, under the trending #Frisco5.