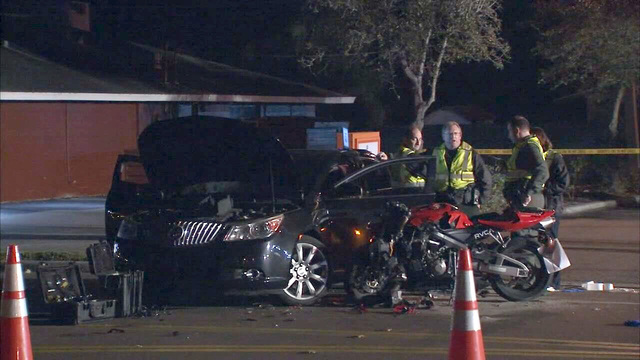 The Pinellas County Sheriff’s Office apparently does not have much oversight regarding how Sheriff Robert Gualtieri hands out our tax dollars. This has never been more evident since Pinellas County Deputy Joseph Miner pulled out of a Dunkin Donuts (not a joke) in a Buick stolen from a citizen in a Civil Asset Forfeiture, right into the path of 20 year old motorcyclist Eli Ulibarri almost killing him.

Mr. Ulibarri was minding his own business, driving well below the speed limit and obeying all traffic laws. He tried to stop as hard as he could, but the car full of Pinellas Deputies stopped right in front of him and gave him no time and no room to stop as they concentrated on their donuts (still not a joke). Moments after the crash, Cpl. Miner can be heard calmly making a call to dispatch, in part, saying, “We need to roll fire rescue … reference a motorcycle, as well. I am involved” exhibiting as much emotion as if he was calling a tow truck for a broken down vehicle.

Mr. Ulibarri, just 20 years old and by all accounts a fine young man, was critically injured and paralyzed from the mid chest down. He will never walk, run, have a normal sex life and will be confined to a wheelchair for the rest of his life. He will have millions of dollars in medical bills, surgeries, special needs and equipment just to be able to survive day to day. He will not be able to work, provide for himself or take care of himself for the rest of his entire life. He was looking forward to a missionary trip to help others, but now he is the one needing the help, and lots of it.

The headlines later read “The Pinellas County Sheriff’s Office has taken full responsibility for Tuesday night’s deputy-involved crash that left a 20-year-old St. Petersburg man with life-threatening injuries.” “Eli was doing absolutely nothing wrong,” Gualtieri told News Channel 8. “Sole responsibility for this terrible accident rests with Corporal Miner … And you’re going to have to swallow the pill and accept the consequence for what you did.” That “full responsibility” Sheriff Robert Gualtieri claimed he was taking for this horrific injury was a check for a lousy $200,000. Again, Sheriff Gualtieri takes a massive injustice and twists the narrative to make is sound like he and the PCSO are the heroes doing what’s right. But how heroic are they really?

Recently the Pinellas County Sheriff’s department made multiple other large payouts in the hundreds of thousands of dollars. But nobody was injured. No person’s life was ruined. The payouts were to Pinellas County Sheriff’s deputies in the form of multiple half million dollar payouts under a massive giveaway program for government employees called the Florida’s Deferred Retirement Option Program (DROP).

The basic concept for the program is to entice highly paid senior officers to leave so that opportunities will open up for younger and cheaper staff members and to give them an incentive to stay. The only real problem is, that when these overpaid staff members collect their millions of dollars, Sheriff Gualtieri then hires them back for higher salaries, defeating the entire purpose of the program, and allowing these formerly over paid employees to become massively overpaid employees. He arranges it so he allows them to keep their massive pensions, the half million dollar payoff for leaving, AND a fat new paycheck. They quit just so that Gualtieri can hire them back so they can collect TWO paychecks! That’s the plan, worked out in advance.

As an example, Pinellas County Deputy George Steffen, 57, retired from the Pinellas Sheriff’s Office under the program and was literally handed a check for $570,847 through Florida’s Deferred Retirement Option Program. That’s almost three times more than they gave Eli Ulibarri for ruining his life and almost killing him. Steffen is also receiving a $8,970 monthly pension, while Eli Ulibarri gets nothing. If that isn’t bad enough, now, Steffen is back at the Sheriff’s Office, this time as an assistant chief deputy overseeing patrol and investigative operations with another fat annual paycheck of $149,350. With Steffen’s $8,970 pension, and his paycheck, that is almost $21,500 per month, or $258,000 per year and he still gets to keep the $570,847 he was paid to quit. But Eli gets $200,000 for the rest of his ruined life.

How much does Eli Ulibarri receive? If he lives until he is 60, he will have been paid $5,000 per year by the same Pinellas County Sheriff’s department that makes Deputies that are favorites of Sheriff Gualtieri millionaires. I am sorry, but this is not the NBA, and no Sheriff’s deputy is worth a half million dollar lump sum contract and $5,000 a week, while Eli gets $5,000 a YEAR.
Several of the deputies returning after their big fat payoff and now collecting double dip paychecks have had issues as well. Pinellas County Maj. Kirk Brunner oversaw the jail when Larry Germonprez was murdered by PCSO Jail deputies and assisted in the cover up and no discipline for the guards. Sheriff Gualtieri didn’t give Germonprez’s wife and children a penny.

Even though there are now dozens of deputies hired back and “double dipping”, Gualtieri said “This is not in any way, shape or form a buddy system, a good old boy system.” Whatever it is, it is a lot more disgusting that just the “good old boy system.” Comments by Pinellas County Sheriff’s deputies on the web forum (LEOaffairs) seem to have a better explanation stating “By recycling these people back into their old jobs Gualtieri is preventing others from moving up. Why were these folks hired back? Political loyalty and payoffs so that they do not run against Gualtieri. Fowler, Brunner, Steffen and Simmovich all know where the skeletons are and have the potential to unseat Gualtieri. They are making a mint double-dipping so why should any of them make waves?

Gualtieri visited the family at the hospital to express his condolences. “Today is Eli’s 21st birthday,” the sheriff said. “He was getting ready to go on a missionary trip.” Cpl. Miner’s taking “full responsibility” came in the form of a traffic ticket. That’s all. And even though Deputy Miner has been in trouble before for lying on police reports and giving false testimony in a criminal case, he will likely ride that “fake retirement” gravy-train being conducted by Sheriff Gualtieri all the way to the bank with several hundred thousand more dollars than the boy he almost killed received. Sheriff Gualtieri, please explain how THAT is “taking responsibility”.