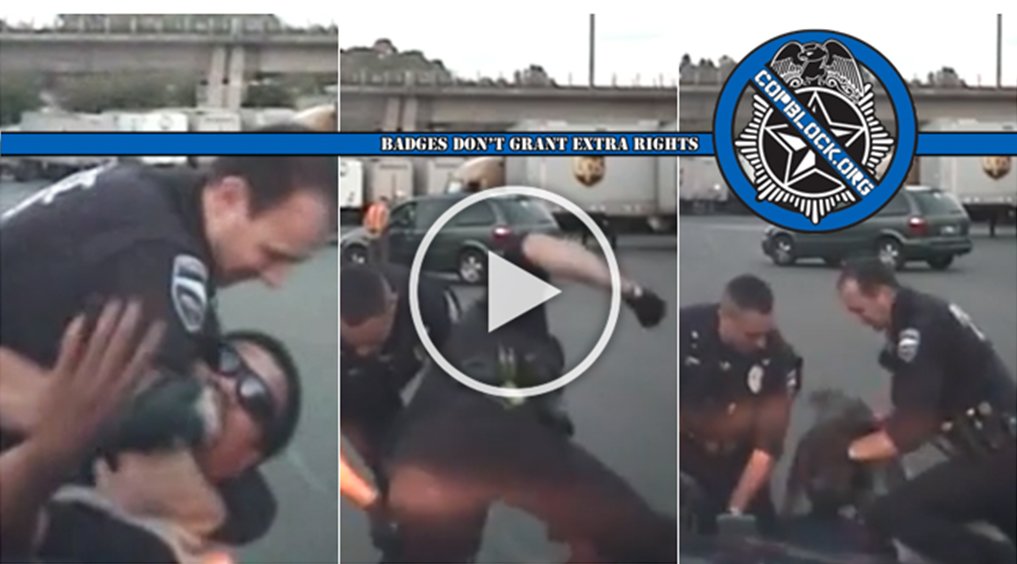 A lawsuit has been settled by the city of Tukwila, Washington after dash-cam footage showed cops brutalize a man when they responded to a complaint that he was dancing in an industrial parking lot.

Linson Tara was repeatedly punched, tased and bitten by a police K-9 handled by officers Brent Frank and Mike Boehmer in the Tukwila UPS freight yard on August 22, 2014.

According to reports, Tara was said to have been “walking around, yelling and dancing” in the area. He did not work there and was confronted by employees who then called police.

The dash-cam footage shows Tara standing with one hand on his hip and the other held up in the air as the officers arrive. Frank is seen taking hold of Tara’s arm and attempting to lead him toward the police cruiser.

Tara appears to attempt to twist away from Frank’s grasp, and in response, the cop takes hold of his neck and throws him onto the vehicle. Boehmer is also seen taking hold of the man and removing his taser before Tara is taken to the pavement.

The footage then shows Frank punching Tara in the face multiple times before Boehmer deploys his taser darts at him at close range, and then proceeds to contact stun him.

The K-9, which can be heard barking in the background throughout the ordeal is released and begins gnawing on Tara’s buttocks and legs before a third officer makes his way to the action and an apparently unconscious Tara is handcuffed.

Following the incident, Tara was hospitalized, treated for his injuries, and then booked into jail on three counts of fourth-degree assault. Those charges were later dismissed however, and Tara filed a civil-rights lawsuit against the cops and the city of Tukwila.

The police department determined in an internal investigation that the officers’ actions were within policy so the lawsuit challenged the constitutionality of the city’s stance that K-9s can be used to bite suspects as a means of “pain compliance.”

It also alleged excessive force, and on Friday, the city settled the suit with Tara for $100,000. It also agreed to pay Tara’s attorney fees in an amount to be determined later by U.S. District Judge John Coughenour.

The 9th Circuit Court of Appeals has ruled that the use of a K-9 bite is “the most severe force authorized short of deadly force” that police officers can utilize.