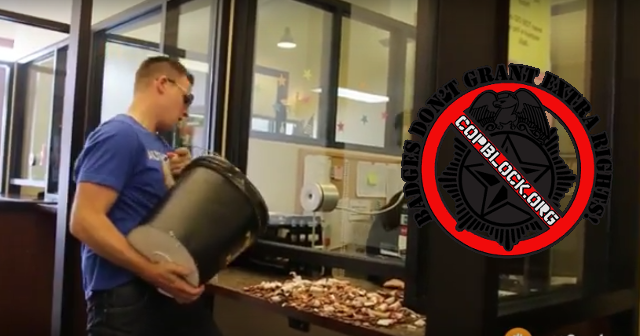 It is no secret that I am not the biggest supporter of activist Brett Sanders. As such, I promised awhile back that I would counter any of his more regrettable ventures that appeared here at CopBlock.org. Last week the Texas Edgelord found himself slathered in all sorts of adoration for perpetuating a pointless juvenile cliche under the banner of activism. In the interest of reason I shall explain why what Brett did was not only pointless, but also immature and harmful to the liberty movement.

Yet before we get to that, let’s be honest about what paying your fines with pennies is – a terribly overwrought cliche. Here is a list of ten people who paid their fines in pennies long before Brett.

I was able to gather those ten names in just a matter of minutes. This full list of people who thought they were sticking it to the man by paying their fines with pennies would be nearly impossible to compile, since the act has been repeated over and over by the habitually non-creative. Still, there is nothing wrong with doing things others have done before you, in and of itself. The problem is that the institution of statism and nationalism is entirely predicated on a public consent that is manufactured through conformity and the endless repetition of similar populist symbols and gestures. What Brett did just threw another penny in the bucket of groupthink, where cliches drown out creativity and innovation.

Now let’s examine, realistically, what happens when you dump a bucket of pennies on a clerks counter.

*Just because I do not support the employment of low level bureaucrats through a statist system, because I most certainly do not, does not mean I think you should forego manners, decency and good will towards fellow humans. I find this no different than the disgust I feel for police who think they are superior to drug dealers just because they don’t like their job. Not being an asshole does not equate to supporting the state.

No, you did not clog up the system. You just wasted your own time as well as that of a few others who also cannot legislate, issue or place judgement on the crime for which you disagreed but paid the fine anyway. You accomplished absolutely nothing of value. This is not like ‘Cop-Blocking’ where one uses legal activities to disrupt the activities of police in order to prevent their wanton harassment of others. No fines are going to go unissued because of your disruption, nor will it potentially rescue anyone from any other kinds of victimhood at the hands of the state.

The only people who are impressed by such acts are the folks in your own choir. Nobody watches this spectacle on YouTube and then decides to forego a lifetime of mental and emotional attachment to the state and its functions. It only resonates with your peers and the outrage junkies who only ever show up to care about anything when it gives them a chance to express their most juvenile emotions in the most highly charged irrational displays of reactionary anger.

On the other hand, it will get you some YouTube hits and the accolades of the choir, which can be emotionally gratifying. I suspect this is the actual reason people pull stunts like this, because it makes them feel good to do it and gets them some attention in an otherwise alienating civilization. And I can actually see the value here. A valve to let off steam acquired from living in rigid legal and social systems, which injures none unduly, is in itself quite a healthy thing. Better to whistle than to blow. I just think it can be done a bit more creatively.

Playing out tired cliches and using them to get validation and gratification is a bit too much. When you combine these two things you recreate the mental processes and methods that authoritarians and their loyal use every day. It ends up becoming another apparatus for the conformity and groupthink that drives statist ideologies. At the same time it also just throws fuel on the emotional fires of the opposition, causing them to be even more against you for even more of the wrong reasons. And most dishearteningly, it puts an obstacle between us and the people closest to seeing the folly of the police state. Whether its the cliche or emo posturing that gets them, or the combo, people will generally be turned off by that which is too blatant. Obvious obviousness is obvious.

Let me be clear that I do not support civil fines, the laws that they are based upon or the system that enforces and prosecutes them. They are just another form of theft and slavery. They are punishments for nonconformity. Which is why conformity is a terrible response to them.

I do not agree with Brett in several ways, but I do thank him for going out there and filming police and creating content and trying to bring some serious issues directly into the public consciousness and agenda. Yet I would encourage him or anybody else to be more creative in your tactics. There is, in fact, a great opportunity to illustrate the beauty of individualism and innovation that most of us cherish as guiding principles. Sacrificing those principles and mailing your activism in by just repeating old messages can be harmful to the cause, and therefore worse than even apathy and inaction.

I just hope that Brett’s pennies did not break the banks change counting machine. If he damaged their property, according to Brett himself, police would be obligated to shoot to kill the deviant bastard.

Fuck the police with style, your own.