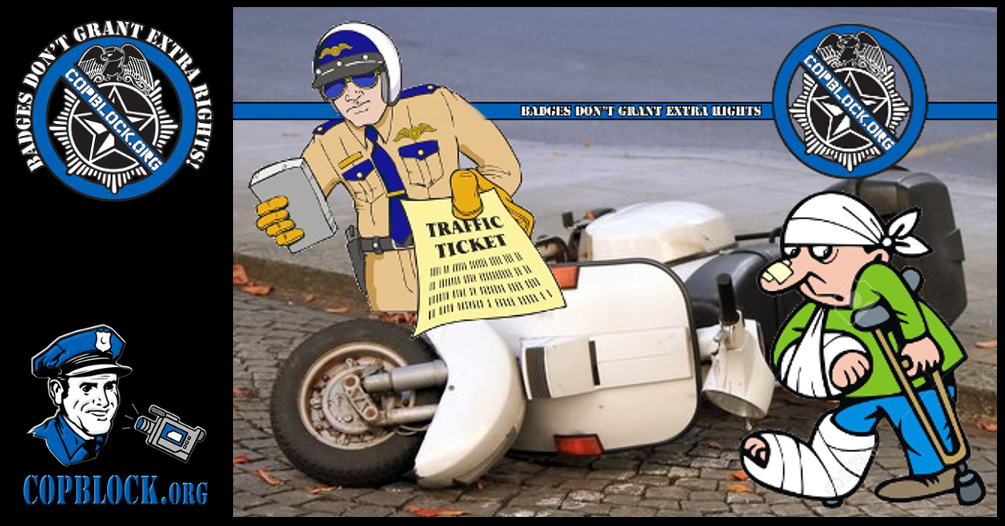 The following post was shared with the Cop Block Network by Allie Goldman, via the CopBlock.org Submissions Page. It details how she was “protected and served” by Officer Eric Dominguez of the Miami Beach Police Department after she suffered a broken leg in an accident while riding a rented scooter during a visit to Miami earlier this year.

Allie states that, instead of helping her get necessary medical treatment for her injury or even simply allowing her to go to the hospital and seek that treatment herself, Officer Dominguez insisted on delaying that treatment by forcing her to provide a driver’s license (which often isn’t required for scooters).

Even after one of her friends retrieved the license, Officer Dominguez then extorted money from her based on an accident that caused no injury or damage to anyone except Allie herself and potentially the scooter for which Allie was already liable for.

I was visiting Miami this past February for my birthday. Some friends and I rented those motorized scooters. On our last day there, I ran into a curb and fell off of the scooter. I did not injure anyone or anything (including the scooter) but the fall resulted in me having a severely broken leg.

A witness decided to call 911 when they saw me in pain. Officer Eric Dominguez responded. He was immediately very rude. I did not have my physical ID on me, so he kept accusing me of not really having a license. I was sitting there sobbing in pain wanting to leave and go to the hospital when I was told by him that he would arrest me if I left.

I had one of my friends drive back to our hotel to get my ID and bring it back to him. The officer was clearly not taking my injury seriously and even asked me to try to walk (which my doctors told me probably caused more damage). When my friend came back with my ID thirty minutes later, he acknowledged that I in fact did have a driver’s license and told me I could finally go to the hospital. I was upset about my treatment from the officer, but decided to let it go.

Two months later, I am now receiving numerous letters from Miami-Dade Clerk of Courts for the FOUR traffic citations Officer Dominguez gave me. First off, I was never told I was being cited with ANYTHING. I fell off of a scooter, I was unaware that was a crime! I am being cited with failure to provide insurance – he never asked for my insurance even though the scooter rental was in fact insured. I am being cited with reckless driving – the officer did not witness me driving. I am being charged with failure to provide a driver’s license – I had one at the time of the incident, and he made me wait to go to the hospital just so he could see it for himself. I am not even sure what the other citation even means.

I am shocked and disgusted that someone who is supposed to protect and serve would respond to an injured tourist and try to turn their life upside down. It was an ACCIDENT that did not injure anyone or anything besides myself.

So after dealing with the trauma of having a broken leg and having to have multiple surgeries, I now have $800 in traffic tickets, a bench warrant in Miami, and a suspended license where I live in Ohio. This incident makes Miami Beach PD look bad and has ruined my trust in the police in general! It definitely has tainted my many great memories in Miami.

It’s actually rather ironic that Officer Dominguez would give anyone a ticket for reckless driving, BTW. Dominguez in fact was suspended from the Miami Beach Police Department in 2012 for (wait for it) speeding and driving recklessly in his patrol car on a occupied beach. In that incident, for which he was restricted from driving a department vehicle for two years and suspended a week, his vehicle actually went airborne due to the speed and lack of traction in the sand. (The video of that Heroic Act by Dominguez is embedded below.)

Prior to that, Dominguez nearly killed four motorcyclists in a crash, including another police officer, while (you guessed it) speeding and driving recklessly in a department issued vehicle in 2010. Then he lied and tried to tell highway patrol officers that responded that he was on duty and responding to a call, when he was actually off-duty at the time. According to the Miami New Times, there’s no evidence in his personnel file that Ofc. Dominguez was punished in any way for this incident. Taxpayers on the other hand, were forced to pay “tens of thousands” to his victims.

Just for good measure, he also has been caught committing fraud by abusing sick time on four different occasions since 2008. The fact that Officer Dominguez is in a position to give tickets to anyone at this point says a lot about the Miami Beach Police Department and the myth of “accountability” among all the Heroic Police Officers in general, not just the Good Cops in Florida.