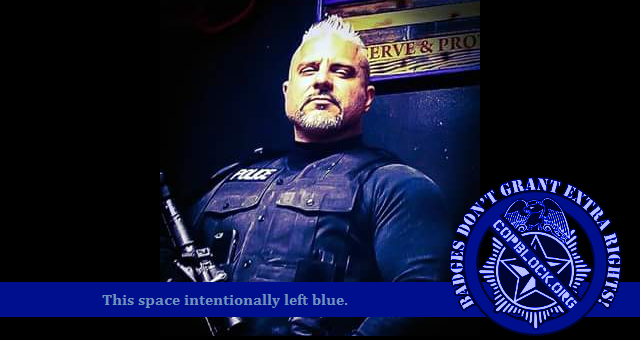 UPDATE 1/18/17: Recently Izzo left policing and came out against the drug war and the thin blue line. He must have been living with his guilt for some time, which explains why he made the disturbing comments below. I thank Izzo for coming clean. That took a lot of courage and bravery.
Check out this Facebook video where he explains.

Officer Dominick Izzo of the Round Lake Park Police Department (Chiraq suburb) is a bit of an attention whore and drama queen. His videos and social media rants have recently been picking up interest in the online syCOPhant circles where they circulate. Izzo is what you would get if a high school football player skipped college to learn to surf for five years, then after struggling with the core curriculum of his intended theology degree, began bodybuilding and got himself a high octane cop career direct out of some McCollege. Kinda like the movie Point Break with a pumped up Guy Fieri playing Keanu Reeves, but instead of chasing extreme sport enthusiasts with a penchant for heists, he just accosts citizens over victimless crimes and splits his off-time between the gym, his salon and therapy sessions to overcome crippling father issues. And Dommy don’t surf.

Anyhow, this guy, THIS FUGKIN” GUY is no Neo, my friends. Red pill, blue pill…this guy tasted the rainbow and is vomiting it back up in technicolor psychopathic melodramas on Facebook. Below is a a photo he posted of himself that looks like it belongs on Wikipedia under ‘narcissism’. His accompanying rant is a terrifying view into the mind of a maniac. I had to read that a few times through to be sure I was getting it right. My initial reaction was that he was being metaphorical, that he was trying to hint at some greater truth about accepting the inevitability of our own deaths. That is a sentiment I can get behind, and one that I have actually recommended for cops and everyone else. But I am pretty sure that is not what he means, mostly because he explicitly says that is not what he means on a few occasions throughout this horrifying rant.

What I think he means is that his existential angst and adrenaline addiction are so out of control that he puts himself in a constant state of paranoia so that he can get a rush out of doing his job. I guess you can call that inspiring. But if you are gonna inspire a megalomaniacal gorilla with a gun to do something positive, pumping it up on a constant state of fight or flight is probably going to seem like a really bad idea someday in retrospect.

A warrior fights for peace and truth, not against some psychological demons he has projected onto the world. Nor does a hero refer to their self as an inevitable victim of imaginary entities of doom and destruction. Izzo’s internal narrative and worldview put him in a dangerous mindset that causes him to see the world like a movie where you can tell the difference between a good guy and a bad guy just by looking at them, and with him as the hero. Such delusions of grandeur are a critical impetus to rational thinking, which makes him a danger to himself and everyone around him.

In the movies we allow our heroes to get away with more than we would in real life because there are no actual consequences. We excuse their foibles and their motivations, and in fact, often empathize with those broken parts. Batman is a violent psychopath with the inability to let go of a single childhood trauma, yet most people tend to view only that one tragic aspect of his story themselves. If Batman were real, we would not be so forgiving. We would not allow the massive shows of destructive violence because we felt sorry about the circumstances of his childhood.

Izzo’s narrative of himself is that of Batman in the movies. He sees only his motivations and intentions, but not the flaws in them, nor the danger. He has cast himself in some larger than life story in which he is destined to triumph over evil. The trouble with going out and looking for evil is that the more you allow yourself to believe in it, the easier it is to find it. Even if you have to constantly broaden your definition of evil just to keep your hero game strong.

The only thing more frightening than Izzo’s outlook on life and the fact that it is shared by many police state mercenaries, is that there are people who share their delusions. The syCOPhant sees only the narrative of heroics, without measuring police against any flaws in their logic, character or motivation. They get so swept up in the emotional rollercoaster of an oversimplified Good vs Evil drama that they forget this is real life and that there are real consequences and victims getting swept up and ruined or killed in the madcap soap opera of the police state.

Psychopaths like Officer Izzo are the reason people thought police would be a good idea in the first place. Yet somehow far too many people still haven’t caught on to the fact that policing has become the Major Leagues for the dangerously deluded and criminally insane.

If his psychological state and terrifying admissions bother you as much as they should, stop by the Round Lake Park Police Department Facebook Page and let them know their bro’s a basket case.

Until next time, be excellent to each other.