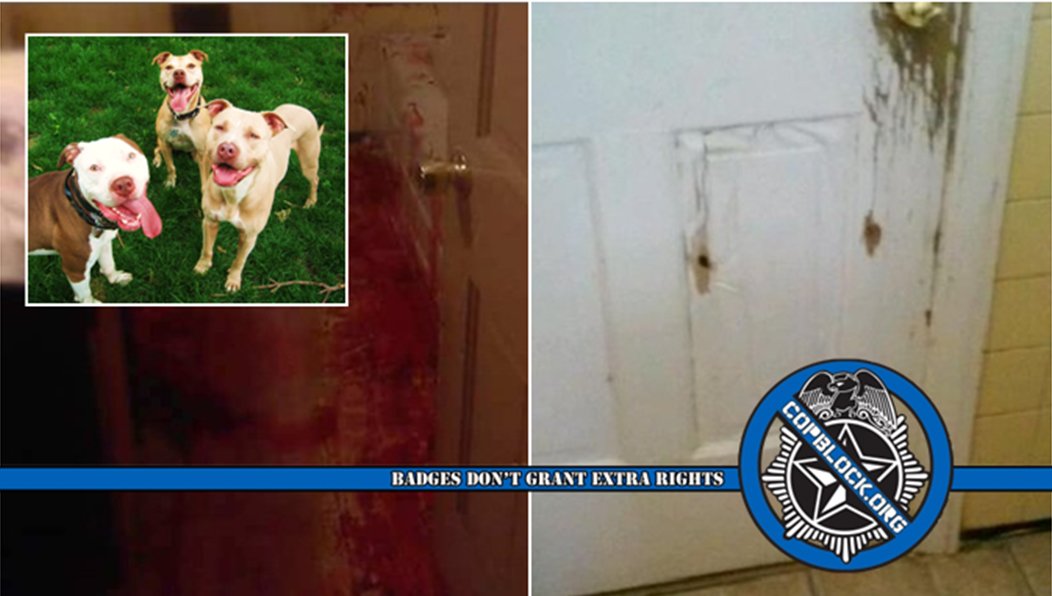 Detroit police officers “acted as [a] dog death squad and stormed through [a] house executing dogs as they went,” a new lawsuit claims.

Naming the city of Detroit, officer John Gaines, officer John Morrison, officer John Paul, and two other unidentified officers, the lawsuit says the massacre occurred while the cops were serving a narcotics warrant at the home of Nikita Smith and Kevin Thomas on Jan. 16.

According to the suit, Smith was the only one home at the time and told police, “Let me put my dogs down in the basement” after hearing them knock at the door.

She then “sequestered” two dogs, Debo and Mama, in the basement and “blocked the entryway,” the lawsuit says, and locked a third dog, Smoke, in a bathroom. Police wrote in reports that there was no response at the door so they promptly entered the house.

The lawsuit claims that when they came in, Debo got through the “obstruction” keeping the dogs in the basement, and as Smith “reached down to her dog… officers shot Debo multiple times.”

The cops then “stormed down into the basement where the officers shot to death plaintiff’s dog Mama, a pregnant female dog.” The lawsuit states “Mama was not barking or attacking” and that she “died in a pool of blood in the corner of the basement.”

The officers then turned their attention to the bathroom that contained Smoke with one of the cops cracking the door and asking, “Should we shoot that one too?” The lawsuit says Gaines and Paul then fired repeatedly though the door.

“Officer Gaines laughed and said… ‘Did you see that? I got that one good,'” according to the suit. “A police officer next said to [Smith], ‘I should have killed you, too.'”

Police reports claimed an officer shot a “vicious gray pit bull” seven times after it charged while “simultaneously, a vicious black dog charged… ” from the bathroom so officers shot that dog three times with a shotgun. The cops said they then shot a “vicious white pit bull” in the basement.

Calling the police story into question however, are photos taken from inside of the home that show bullet holes in the bathroom door from which the cops said Smoke “charged” out of. Additionally, the inside of the bathroom was photographed drenched in blood.

Following the bloodbath, the lawsuit says the three dead dogs were placed in plastic bags and removed while Smith was arrested for possession of under one ounce of marijuana (25.8 grams). She also had her 2007 Grand Prix seized.

Police had procured the warrant to search the residence after an informant had claimed to have purchased some of the plant material from a man inside the home at an earlier date.

Smith would be charged by the Wayne County Prosecutor’s Office with a violation of Detroit’s marijuana code. She pleaded not guilty and the case was dismissed on May 11 after officers failed to appear in court.

The lawsuit comes only three months after Detroit paid $100,000 to settle a lawsuit filed because officer Daryl Dawson fatally shot a chained-up dog named Babycakes. The Detroit police department has not commented on the pending litigation.