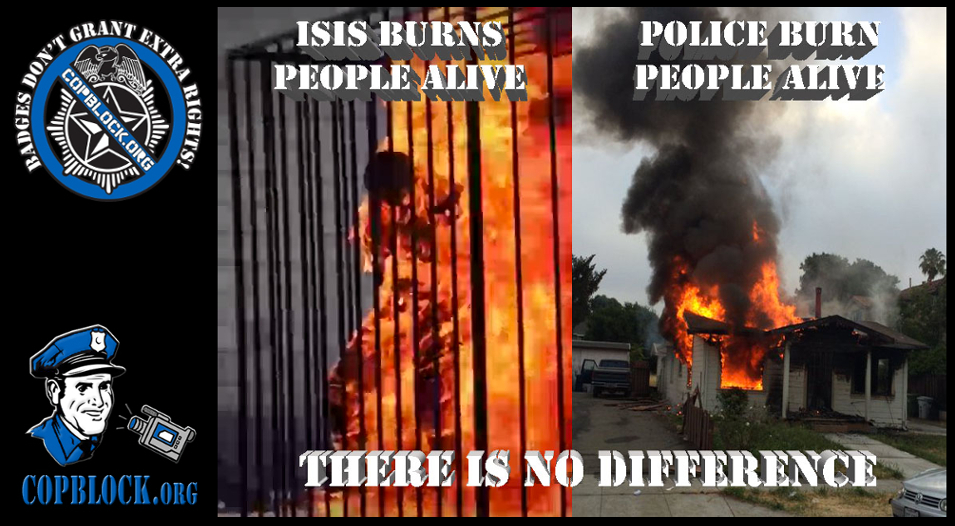 The following post was shared with the CopBlock Network by James McLynas, via the CopBlock.org Submissions Page. While discussing the rarely acknowledged police tactic of intentionally burning people alive James asks, “Is there any end to the violence police are willing to inflict?”

As pointed out by James in this post there are several known instances in which the police have intentionally set fire to buildings occupied by people they had been involved in a standoff with and then allowed those fires to burn while those people were trapped inside.

Probably the best known and most well documented examples of that is the Waco Siege, involving the Branch Davidians, that took place in 1993. A total of 76 men, women, and children died in the fire that many believe was intentionally set by FBI and ATF agents and that they undoubtedly made no effort to extinguish.

Another even more blatant example that has recently begun to receive some publicity, but is still largely unknown to the general public is the fire bombing of the neighborhood surrounding the home of the MOVE Organization. Philadelphia has been referred to as the “city that bombed itself” in reference to this 1985 incident.

This is, in fact, a pretty accurate description of what happened that day when police dropped a bomb onto the row house MOVE members were living in and then stood by as it and 65 neighboring houses burned. Police could be heard saying, “let the fire burn” on their radios and they did just that killing 11 people including five children.

More recently, the cabin in which former LAPD officer Christopher Dorner was holed up in during a standoff with police was ignited by CS gas and allowed to burn completely. Once again, police could be heard on the radio stating, “All right, Steve, we’re gonna go, er, we’re gonna go forward with the plan, with, er, with the burn [or burner]. We want it, er, like we talked about.” That was then followed by, “Seven burners deployed and we have a fire.”

Other police could be overheard on video recorded by a local TV station shouting, “We’re going to burn him out,” and “Burn this motherfucker!” It’s not exactly hard to put two and two together there. Nor is it hard to figure out why, although in theory people are supposed to have a trial before a death sentence is carried out.

Images and statements coming out of San Francisco clearly show police intentionally set fire to a home despite knowing a person was inside. Police were angry that the man inside the home may have been responsible for shooting two police officers, and this is what police REVENGE and mob mentality looks like. No jury, no due process, no Constitutional rights.

A policeman of some rank within that department literally decided that this suspect no longer deserved to live and ordered that his house be set on fire, just like the Branch Davidian Compound in Waco, TX and the SLA hideout in Los Angeles, CA and most recently, a cabin with former L.A. policeman Christopher Dorner inside. It seems the police reserve this special punishment for people they claim shot at them.

Newspaper reports regurgitating the police statements are stating that the “cause of the fire is still under investigation” as Deputy Bosques, the Alameda County Sheriff’s Spokesperson, claimed. Bosques said fumes from the gas canisters may have ignited the fire. However, the Fremont Fire Department already explained the cause as “coordinating an exterior fire attack” and that “This is a defensive fire. No firefighters going inside”. No need to investigate the cause of the fire is there? It was caused by a “coordinated fire attack”. Do police now have flame throwers like Marines used in the caves of Iwo Jima against Japanese soldiers?

“He told us he had a gun so we are not in any hurry,” said Alameda County Sheriff’s Sgt. Ray Kelly after the fire started to engulf the home and firefighters stood nearby shooting water on adjacent homes, but not the one that was on fire. The body of the man was found huddled in the bottom of a charred closet.

Not long ago, the New York Post decried the burning alive of Jordanian pilot Muath al Kasasbeh and several others by ISIS as “the Return of the Dark Ages.” The horrific images were plastered all over the internet as the world condemned such inhuman acts. Well today, those dark ages returned to Fremont, California and the perpetrators weren’t foreign terrorists, they were American terrorists, the Alameda County Sheriff’s Department.

Americans will stand by and let this happen while at the same time declaring the ISIS rebels barbarians for doing the exact same thing. Is this what we have become? Is this what we allow police to do in the name of “protecting and serving.”

Most states have abolished the death penalty, but that doesn’t seem to stop police in America from skipping that messy court process and instituting their own form of death sentence; burning at the stake. American soldiers are not allowed to waterboard, but police burning someone alive is OK?

Can anyone please explain this to me?