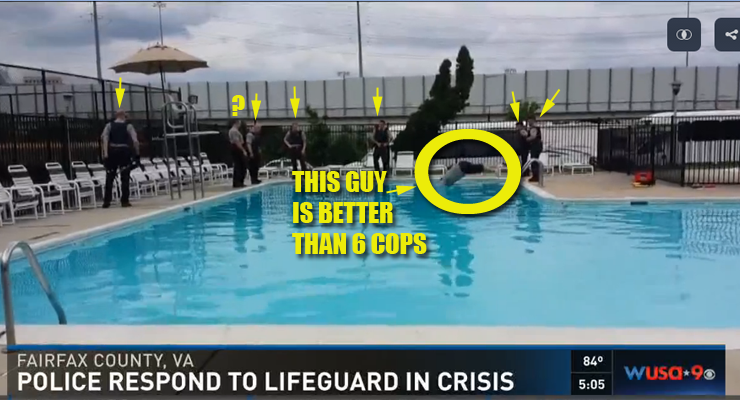 On May 30, multiple unnamed Fairfax County police officers were called to the Riverside Apartments in Alexandria, Virginia regarding a 20-year-old lifeguard in emotional distress who had been pacing back and forth and blowing his whistle.

The summary of the event from the police department’s website recounts the ensuing events as follows:

The pool was evacuated and officers continued to attempt to communicate with him but he instead jumped in the pool, swam, exited the pool, and began talking out loud. The man only spoke Polish and a Polish-speaking officer was summoned to the scene. This officer continued to attempt communication to no avail. The distressed man then jumped back into the pool and sank to the bottom at which point another lifeguard along with the assistance of the officers were able to bring the man out of the water. The man was unresponsive when he was taken out of the pool. Fire and Rescue personnel assisted the man and after regaining consciousness, he became combative.

While one news outlet generously describes the situation with the headline, “Fairfax Co. police defuse tense situation with lifeguard in crisis,” another news station obtained video that tells a different story.  From WUSA:

Cell phone video shows the lifeguard walking into the pool, then slowing (sic) going under and not coming back up for two minutes and 40 seconds.

Six police officers surround the pool and watched.  A civilian, who police say may be another lifeguard, talks to the officers, and then jumps in the pool and goes underwater.

Within seconds, three officers begin removing their gear and two officers jump in to assist the civilian who had pulled the man up.

The officers pulled the man out and began to perform CPR after not finding a pulse. They were able to bring back a pulse within seconds, saving his life, said 2nd Lt. Brian Gaydos.

Why did these six or seven brave men of inaction (a man on the left side of the pool without a vest on appears to also be a cop) just stand there nonchalantly until someone else acted to intervene?

The FCPD spokesman provided the pathetically lame excuse that “police officers are not trained to do water rescues,” as though this were an open water or flood situation rather than a modest apartment complex swimming pool. The statement echoes that given for the sheriff’s deputies in Florida who recently watched as three teenage girls drowned in a pond.

While the officers can be commended for finally stepping up to do their jobs by assisting the citizen who dove in to get the disturbed man and performing CPR, their bystander behavior is disturbing and warrants further investigation by the department. Don’t hold your breath on that, though. Especially not if you’re in a pool with six or seven Fairfax cops standing around aimlessly.