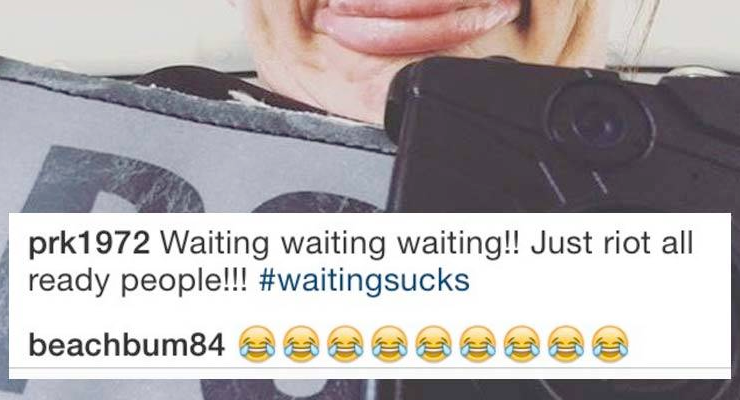 San Diego, CA — When considering how riots start, it is important to note who comes dressed for a riot. All too often, police tactics ostensibly designed to protect and calm citizens end up having the opposite effect. Tactics such as “kettling” push non-violent peaceful protesters to their limits by forcing them into tight spaces where they are surrounded by storm troopers in body armor banging on their shields with batons.

Who wouldn’t take this tactic as an aggressive move meant to provoke?

Many officers know that this response to protests has a stressful, intimidating, and provoking effect on those it’s employed against and this was recently evidenced by a San Diego cop’s Instagram post during the Donald Trump protests over the weekend.

The cop posted an image of herself in riot gear, with the caption: “Waiting waiting waiting!! Just riot already people!!! #waitingsucks.”

The officer, whose name is being protected by NBC San Diego, was policing Friday during Donald Trump’s rally at the San Diego convention center.

“It looks like they were taking that as a joke, and our lives are not a joke. Our safety is not a joke,” exclaimed Glover.

Three hours after she made the post, around 5 pm, the officer got what she wanted as supporters began to mix and fights broke out. Police then declared an unlawful assembly and began to drive out the crowds.

“They post ‘come on riot already so we can use this equipment against you,’” said Cathy Mendonca of United Against Police Terror. “That’s pretty much what the message was.”

San Diego police Lt. Scott Wahl said the department was made aware of the photograph and assures the public that they “are looking into this matter.”

Capt. Ray Lewis, who retired from the Philadelphia Police Department in 2004 after serving 24 years and was present during the 2011 Occupy Wall Street protests, said undercover provocateurs frequently engage in inciting violence.

“That’s the easiest way to destroy a movement,” he stated. “Let’s say you have Occupy. Either the police, Homeland Security or corporate America – Wall Street – will hire one of their security officers to go out there and burn the American flag, so now you have one of these guys burning an American flag and he’s not an Occupier, he’s not with the protestors, but guess what gets shown all across America?”

“All mainstream America, sitting at home in their middle-class neighborhoods, see this one guy burning an American flag or another one urinating on a police car who is also an undercover agent and then think ‘oh my God, that whole protest – that whole movement – is corrupt and I don’t want anything to do with it.’”

“So they never learn anything about it,” he added. “You can kill a movement that fast with provocateurs.”

The government can also use provocateurs to stir up violence at otherwise peaceful demonstrations to justify a draconian response to the protest and the militarization of local law enforcement. And now, thanks to this San Diego cop’s honesty about her intentions to want violence, the people know exactly what to expect during demonstrations.