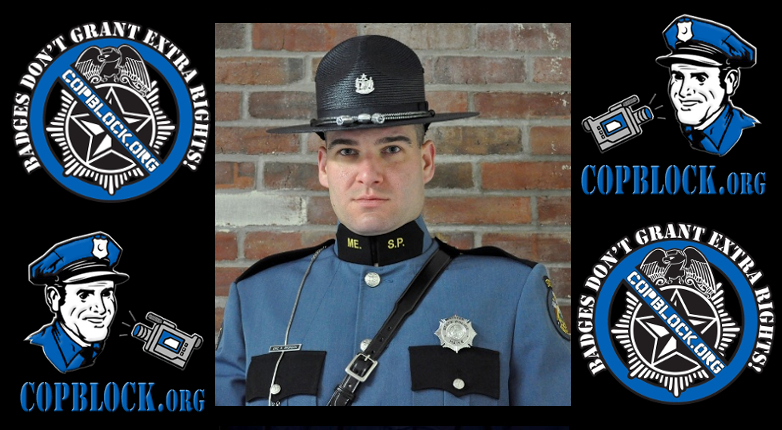 The following post was shared with the CopBlock Network by Louis C. Johnson III, via the CopBlock.org Submissions Page. It details how Johnson, his uncle, and his boss were “protected and served” by a Maine State Trooper after they stopped on the side of the highway to remove a discarded dryer from a ditch next to the road.

Instead of appreciating the good deed they were performing at the time, Johnson says that Trooper Bronson harassed and belittled them unnecessarily. He also says that Bronson accused them of having drugs without any sort of evidence beyond his refusal to consent to a search of his vehicle.

Around 1:30 p.m. on Monday June 6th 2016 near the Athens/Cornville town line on route 150 South, my uncle,my boss, and I were on our way back from my residence in which we were picking up parts for my line striping machine, when we saw on the right hand side of the road in the ditch someone had thrown a whole busted up dryer. We all agreed that we would stop and pick it up, for some people have no respect for the town or the environment to just discard their broken dryer in the ditch of a main road.

So, we proceeded to all get out and load it into my 2005 Ford F150. It was at that moment that a Maine State Trooper drove by us going north on route 150. He was traveling at a very slow rate of speed, even though the speed limit is 50 mph, until he was out of sight.

By that time, we had the dryer loaded into. Then State Trooper Eric Bronson came back and pulled up behind us, stepping out of his car and walking up to us. One of us said, “hello sir, what can we help you with? He asked us what we were doing, but it was obviously clear what we were up to in broad daylight on the side of a busy road.

In my eyes, this officer was already just looking to “make a bust”. This could also have been because in the passenger seat of his cruiser there was a female individual. I could not tell if she was an officer as well, but nonetheless it looked like he could have been show boating for her. Either way the conduct of this officer was out of line.

We asked why he had pulled up behind us and what we could help him with and he said, “this looks suspicious.” When we asked why, he just asked if were friends and whether we knew each other? Why, I thought to myself would he ask that and why did this look suspicious? We told him what we were doing, which was exactly what I already said we were doing. Simply picking up an old dryer out of the ditch. So, the officer then and all the while had an attitude and had a rude tone of voice. Next, he asked for our ID’s like we were common criminals. It was obvious what we were up to and that was far from suspicious.

He then got back into his cruiser and proceeded to take at least 15-20 minutes to run three background checks. Upon returning from his cruiser, he said we all “checked out,” but wanted to know why we all were “shaking” and “acting nervous.”. Now this came as a surprise to all of us. My uncle said that we weren’t and that he is wrong.

Meanwhile, while he was in his car, we continued to secure the dryer, talk, laugh, and joke with one another, like we normally would with or without him there. However, he told us we were wrong and that we were acting nervous. At this time, I was getting annoyed with the arrogant rude, behavior of this man.

I said, “if anyone was to be nervous from the presence of an officer it would be from watching the news lately.” I was referring to all the police shootings of unarmed civilians lately. But, before I could elaborate on this further, Trooper Bronson said sharply, “oh, you mean civilians shooting police officers!”

He obviously knew that I was getting frustrated with him, so it seemed as though he was trying to anger me. My uncle noticed this and told me not to talk about that sore subject and told the officer that I didn’t mean anything by bringing up the news. However, Trooper Bronson then looked at me and said that I was starting trouble. Now did he forget about my freedom of speech? And how to treat people?

He then asked where we was heading to and we replied Skowhegan. Then he asked us, “what’s in Skowhegan?” That’s a pointless question, since he is from Troop C which is located in Skowhegan. He knows damn well what’s there. Then asked what by then we all knew he would eventually ask. “Do any of you have in your possession any illegal substances or marijuana that we weren’t supposed to have.”

What mades me angry thus far into this encounter was:

So, after the question was asked, we all answered, “no.” And he then asked again while saying, “so if I was to search your vehicle I would find nothing illegal?” We had just said we didn’t have anything, so why treat us like lying children and ask that question? Makes no sense to me or anyone else in the situation.

The officer then asked if I would consent to a search of my vehicle. I was already really annoyed and disappointed with this officer’s behavior and said, “no sir you may not search my vehicle. I do not give you consent to do that.” He then got very angry and said, “K, that tells me what I need to know. That tells me that you have drugs in that vehicle, but you have your right to say no.”

So, his statement that because I refused to let him search my vehicle he knew that there were drugs in my vehicle was childish and completely uncalled for. Also, it was not professional at all. It was at this point that I realized that this wasn’t a public service or a protecting the public encounter…that this was harassment.

So, I then said, “can we go?” He replied, “yes” and I told him have a nice day and to drive safe. We all got back into my truck and and drove off, while he stayed behind us. Then about ten minutes into our drive we passed an unmarked cruiser. This tells me he called in to see if he could cause more trouble for us. I assume he was angered by me exercising my rights and not consenting to the search.

I will end this by saying that my uncle, my boss, and I have nothing, but respect, for officers of the law. But Trooper Eric Bronson’s behavior did not reflect the standard of professionalism the state police should have and that all the others I have met have had. In fact, I haven’t, until today, met an officer as rude, belittling, and unprofessional as he was. Impress the ladies on your own time Trooper Bronson. Shape up and protect and serve, don’t belittle, harass, and humiliate just because you wear a uniform.