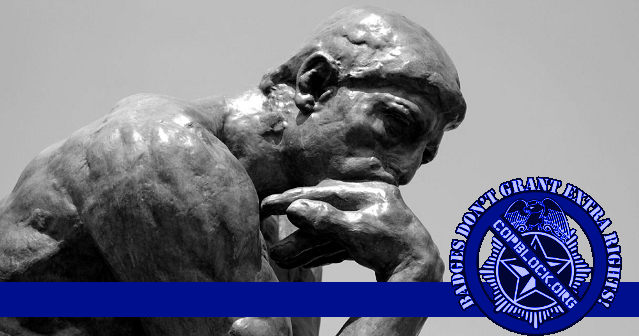 Many people are unable to differentiate between the concepts of freedom and liberty. To make matters even worse, they often confuse them with privileges and permission. Yet when we take a look at the philosophical meaning of these two concepts, the idea that ‘heroes’ with badges are protecting them becomes ridiculous.

Freedom is the ability to make choices. By that I do not mean that it is the permission to make specific choices, but the individuals ability to consider options and make an informed decision to act in any given way. Freedom is not granted during the decision process, it precedes it. Let us look at a few examples.

A person who is in a coma has no freedom. This is not due to some outside force restricting them, rather it is dependent on their own ability to make choices, which is limited by their own mental state.

Likewise, a person who has been brainwashed by a cult does not have freedom. Even if the cult has no enforcers that physically prevent them from acting outside of the cults rules, the ideas act as a preventative against the individuals ability to make rational decisions for themselves.

Often when we speak of freedom it is in the context of not having external obstacles preventing us from doing things, but freedom actually means having the mental capacity to choose freely. The police cannot protect us from our minds. They cannot grant or protect freedom, for such comes from within. Yet cultural ideologies that elevate police activities to eternal necessary truths can certainly rob us of our freedom.

Liberty is the ability to exercise choices. Again, this does not mean permission to exercise them, but the lack of any institutionalized force which would prevent one from exercising their natural born liberty.

When two individuals are expressing their liberty and it creates a conflict, this does not equate to a lack of liberty, but rather a natural consequence of it. On the other hand, systematic responses to the expression of liberties rob us of them because systems are not human individuals, and therefore have no claim to liberty. When a system interferes, it always creates a disruption of individual liberty.

In this way, police can only take your liberties. They cannot provide or protect them. Any disruption of natural consequences between liberated individuals making independent decisions entails a removal of liberty.

Liberty and freedom are not products of protection. They cannot be safeguarded externally. They are the responsibility of every individual who wishes to express them. Those who trade privileges and permissions for freedom and liberty cannot ever gain any of those, but will almost certainly lose them. Likewise, they cannot be granted or protected externally. The only way to insure your liberties and freedoms is to prevent institutions which regulate them, and by extension, compromise them.

Police cannot protect what they do not have access to, and that is the inner world of the individual. Nobody but the individual can protect their own naturally given freedoms and liberties. Those you are born with. Those who try to take charge of them can only desecrate, destroy and rob them.

Abolish the police and learn to be your own responsibility.