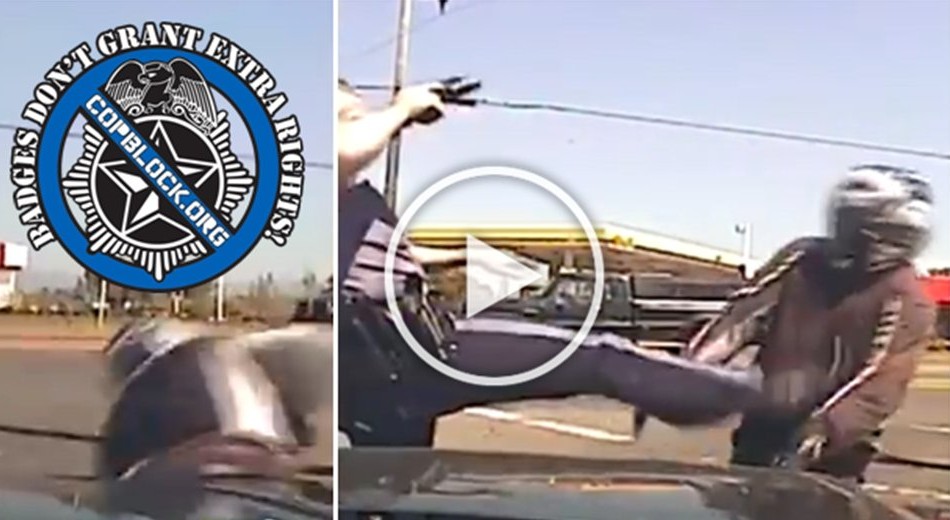 The State of Oregon has dropped a pair of appeals in a case in which a state police lieutenant was filmed crashing into and kicking a motorcyclist.

An eight-member jury ruled in U.S. District Court in January that Lt. Rob Edwards had violated Justin Wilkens’ civil rights in an Aug. 3, 2012 incident that left him with a broken clavicle, a fractured rib, and several other injuries.

Wilkens was driving his motorcycle aggressively, speeding, weaving in and out of traffic, and passing motorists despite double yellow lines on Crow Road west of Eugene. One of the cars he passed turned out to be an unmarked Chevrolet Camaro driven by Edwards.

In footage captured by an in-car video system in Edwards’ police vehicle he was unaware of, the officer is seen pursuing Wilkens until he reaches the intersection of Highway 126.

The video shows the motorcyclist coming to a stop before the cop rear-ends him while traveling at low speed, sending him flying to the ground. Edwards is then seen exiting his vehicle with his gun drawn and pointing it at Wilkens.

After Wilkens shakes himself off and makes his way to his feet, the footage shows Edwards deliver a front kick to his upper chest. The motor­cyclist is then seen slowly complying with commands to get on the ground at gun point and is handcuffed.

The video was played multiple times for the jury during the three-day civil trial in January. They determined that Edwards acted with negligence when his police car rear-ended Wilkens’ motorcycle, and that the kick constituted excessive force.

In response to the verdict, the Oregon State Police said in a statement that they were “disappointed with the outcome and feel the actions of [Edwards] clearly did not violate established procedures or tactics.” In addition, they asserted that Edwards “should be shielded from the liability of civil damages.”

Edwards conceded in court that Wilkens had begun to comply with his commands before he kicked him, but maintained that he was unable to stop because he “already had the muscles fired” in his leg.

He also claimed that crashing into the motorcycle was an accident that possibly resulted from loss of braking power in his car. A brake expert testified however, that “brake fades” are rare in vehicles equipped with modern break systems like Edwards’ Camaro.

In the wake of the incident, Edwards received nothing more than a written reprimand for neglecting to report his use of force to supervisors and was later granted a promotion from lieutenant to captain.

State attorneys appealed the January jury verdict, as well as McShane’s order but moved to dismiss the appeals after reaching an agreement with Wilkens at a mediated settlement conference. The decision to drop the appeals was finalized on Friday.