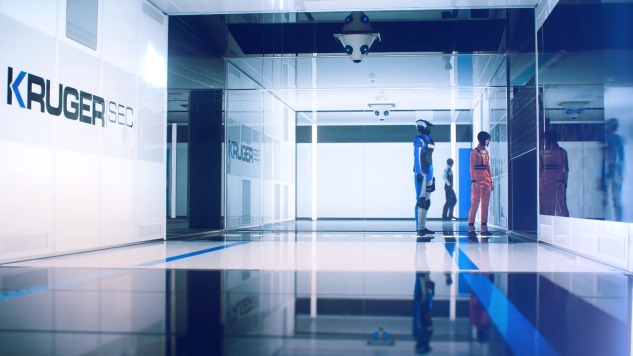 Paste Magazine writer Kyle McKenny compares the police state of the video games Mirrors Edge and Mirrors Edge: Catalyst to the ever looming police state of the US. He draws conclusions about the placing of emphasis on individual liberty while providing none and Big Brother’s all seeing electronic eyes and ears that watch and record our every action and word.

Mirror’s Edge and Mirror’s Edge: Catalyst present a troublingly possible vision for the future. The world DICE crafted represents the logical conclusion of surveillance, political suppression and police brutality taken to their extremes, all in the name of safety and security. The seeds of their world are present and growing in ours today. The Snowden leaks, increasing voter suppression and widespread violence by police officers make it clear that The City of Glass isn’t as science fiction as it may seem.

“It’s hard to find ways to communicate these days without half the world listening in,” Faith’s friend Birdman says to her early on in Catalyst, but it could have just as easily been said about today. Mirror’s Edge: Catalyst’s City of Glass is blanketed in security cameras that regularly scan citizens to ensure they are following the letter of the oppressive law. Anytime Faith approaches one, it will scan her and alert authorities, who come running, armed to the teeth. Billboards across Glass display the image of a Robocop-esque masked officer with the words “We Are Watching” blazoned across.

The U.S. is more secretive about its surveillance than Glass, but it is becoming more and more insidious. Snowden’s leaks made it painfully clear that the U.S. government spied on millions of citizens through the mass collection of phone records for years. The 2015 USA Freedom Act rolled back the NSA’s ability to collect everyone’s phone records; however, this by no means prevents future Congresses or Presidents from removing the law or finding workarounds. It also doesn’t address one of the baseline problems: the growing power of the executive branch and its ability to keep secrets like these from Congress and the American people. The limits of the Freedom Act were seen when, at the end of last year, the Cybersecurity Information Sharing Act was signed into law, which compels businesses to share mass data about internet users with the government without the need for a warrant. The government markets these tactics as necessary for safety, and have convinced 42% of Americans to approve of the widespread surveillance. The advertised goal of mass surveillance in both Mirror’s Edge and America may be to catch lawbreakers, but over time they remove notions of privacy, inspire fear in the general population, and stifle political dialogue. The effects of this fear are already being seen today, discouraging some from openly discussing their political views on the internet.

This political discussion is largely absent from the general populace of Glass. The average person, known as an employ, is too distracted by the meaningless pursuit of status and the furthering of their careers, unaware of the impossibility of upward class mobility. The Krugers have established their totalitarian control over the ruling government. Mirror’s Edge: Catalyst’s nation of Cascadia was formed with democratic ideals, but quickly began curbing voting rights. In Faith’s time, Gabriel Kruger is a clear autocrat, unquestioned by the employs. Political suppression starts small though. Government initiatives such as requiring ID’s to vote, decreasing opportunities to vote by removing early voting, and removal of voting rights for committing crimes, even misdemeanors, are seeds of large-scale political suppression, and they are all already happening in America. In addition to the results of such political oppression, Mirror’s Edge: Catalyst also depicts the endpoints of an unchecked militaristic police force.

The opening scene of Mirror’s Edge: Catalyst shows Faith on her last day in prison. A guard comes to escort Faith out. The guard gets close to Faith, brandishing her baton, and threatens Faith, saying “Maybe you’d like another three months?” before slamming Faith against the wall of her cell. “It would be so easy,” the guard says, trying to elicit any sort of response from Faith to use as an excuse to keep her in prison. “Personal freedom comes at a cost,” is poignantly heard from the prerecorded exit message playing over the prison’s PA. The police officers in Mirror’s Edge: Catalyst, known as KrugerSec (after the ruling Kruger family), always engage with violence first. They carry machine guns and cover their faces with masks and shields. They are impersonal tools of violence and suppression used by the ruling elite to keep the employs in line and society stable.

Open defiance by average citizens in Mirror’s Edge was quelled in a series of protests, called the November Riots. A similar linguistic argument takes place in Mirror’s Edge as in our world over these anti-government movements, with different media outlets or individuals referring to people as either protesters or rioters, depending on their views. KrugerSec responded to the November Riots similarly to the response to protests across America: with Swat teams covered in military gear brandishing machine guns at civilians. For protesting the government, Faith’s parents lost their lives to this state-sanctioned police violence. Despite similar violence in the U.S., brave Americans continue to protest police brutality.

The greatest irony in Mirror’s Edge: Catalyst is the importance the government places on the concept of individual freedoms, without actually granting any. “Together we have created a world where we celebrate individual freedoms and enterprise. A world where everyone who contributes is rewarded with safety and prosperity,” Gabriel Kruger announces to the city on giant, Times Square-like monitors. And the employs continue working. They’ve been blinded to the greatest hypocrisy. The government pays lip-service to individual freedom, and grants it to a few of the elite, but keeps the vast majority oppressed.

Mirror’s Edge: Catalyst presents at surface level as far future sci-fi, but its world is entirely grounded in problems plaguing our country today. DICE has presented a vision for the future that is all too possible. Mirror’s Edge: Catalyst argues that its world is one possible future trajectory, one where conformity is the rule of law and violence is used as a tool of “safety.” In Mirror’s Edge Faith doesn’t try to take down the government, she just wants to keep herself and her sister safe. Catalyst once again presents Faith as skeptical of directly opposing the government. Her world may already be too far gone, but Catalyst tacitly reminds us that our’s isn’t.