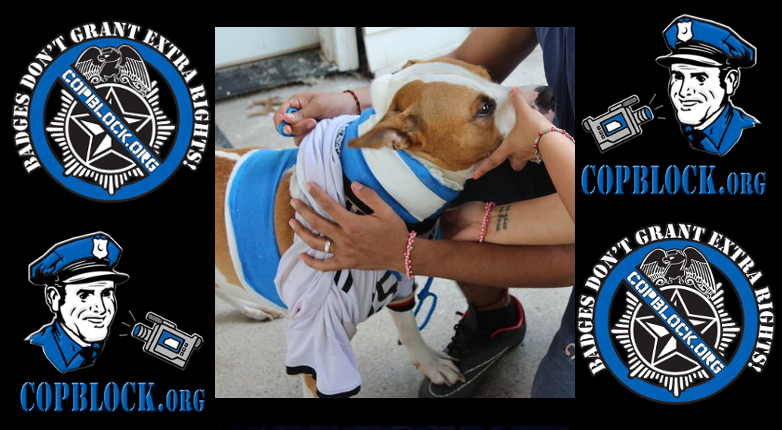 Last week, while investigating a fight, a police officer in Elkhart, Indiana shot a family’s dog after claiming that it charged at him. Fortunately, only one of the three bullets the unnamed officer fired struck the dog and he survived, but sustained what was described as two “large wounds.”

Meanwhile, Gisselle Soto maintains that her dog, Churro, never charged at the officer and that he is a friendly and well-behaved pet. She also states that she and her husband were just walking their dog when police asked them about the fight which had already broken up prior to their arrival. According to Soto, Churro had barked at the officer, but never tried to attack or even approach him.

Even more disturbing is the claim by Gisselle and her husband, Ricardo Soto, that after shooting their dog, the police officers present made light of it. In fact, they charge that the officers even celebrated the shooting by “high-fiving” each other and laughed about it afterwards, while making comments about how it was “just a dog.”

Via the Elkhart Truth:

An Elkhart woman says police had no reason to shoot her dog on Friday evening, saying officers were laughing and high-fiving each other after the incident, which left her dog with two large wounds, but luckily still alive.

Gisselle Soto, the owner of Churro, a 4-year-old pit bull/boxer mix, said her dog was only barking and never lunged at the officer before he pulled out his gun and fired three times at the dog. Only one of the bullets hit Churro, going through his neck and exiting out his chest, and a veterinarian at a local animal hospital said Churro was very lucky, according to Soto.

Her account directly contradicts what police said Friday night. The officer was walking back to his patrol car after conducting an investigation into the fight when the dog charged at him, said police spokesman Sgt. Chris Snyder. The dog jumped on the officer, which led him to draw his gun and shoot at the dog.

In addition, the couple say that the area where the shooting had other neighbors nearby, including children playing outside. Obviously, this placed those people into danger from errant shots. In fact, Ricardo was himself grazed by a bullet intended for Churro that ricocheted off the pavement.

Cathy Pepper, the Soto’s neighbor, supports their statements that Churro would never attack anyone and is not aggressive toward people, while also criticizing the behavior of police .

“Churro is always very friendly,” she said. “The police come and they harrass us down here, they speed, it just isn’t right.” According to Sgt. Chris Snyder, the police spokesperson, an “investigation” is under way and as soon as those top notch investigators get to the bottom of it, “the department will deal with that,” if it is determined to be true. Of course, absent a video, which is not mentioned in the reporting on this, the word of those cops who shot their dog and then celebrated their deed will be what they base their “investigation” on. (In other words, don’t hold your breath.)

Meanwhile, this is the third time police in Elkhart, a suburb of Gary, have shot someone’s dog in less than nine months. That includes an incident in October where an officer shot a dog, that was inside its own yard, at least ten times. Similarly, that officer claimed the dog had charged at him. However, witnesses to the shooting stated that the dog was actually running away from him in the other direction, at the time.