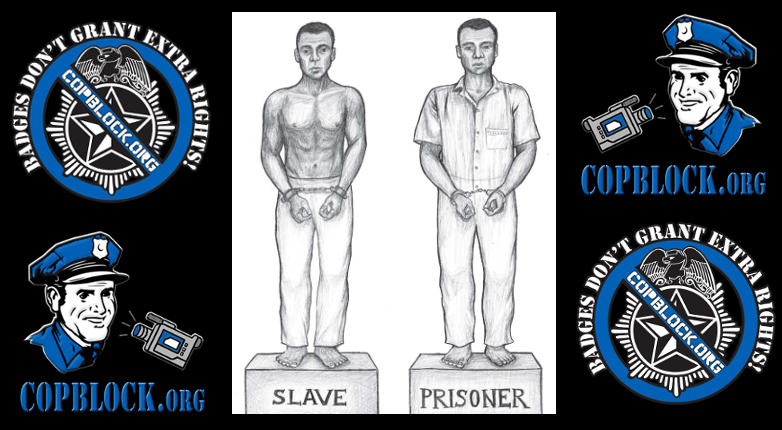 This post was written by Logan Glitterbomb and originally published at the Center For a Stateless Society (C4SS) under the title “Modern Slave Uprisings.” Posts and other content you think are worth sharing with the CopBlock Network can be sent in to us via the CopBlock.org Submissions Page.

(Note: This has been posted in its original form and no edits to the original text were made. Some links may have been added within the text and images have been added. In addition, the conclusions expressed within this initial introductory summary represent my own interpretation of what is being stated within Logan’s own writings.)

In the post below, Logan discusses a series of strikes among inmates within Texas prisons. He also discusses the reasons behind those strikes and the nature of prison labor that is being imposed upon those inmates. Essentially, that forced work and the lack of compensation for that work amounts to a modern day version of slavery. “Texas’s prisoners are the slaves of today, and that slavery affects our society economically, morally and politically,” stated the five-page letter put out by the Industrial Workers of the World’s Incarcerated Workers Organizing Committee (IWOC) announcing the prison strike. “Beginning on April 4, 2016, all inmates around Texas will stop all labor in order to get the attention from politicians and Texas’s community alike.” And despite advanced notice given to the prisons and many threats of violence and retaliation aimed at potential strikers, at least seven prisons went on strike, with prisoners refusing to leave their cells and work, to demand an end to modern day slavery. In effort to quash the strikes, several prisons went into complete lockdown, forcing prisoners to stay in their cells with no lights, visitors, phone calls or access to educational or recreational resources, and little more than the occasional sandwich to ward off hunger, while denying the existence of such strikes to the outside world. They’re instead claiming that the prison-wide lockdowns are only one of two regularly scheduled prison lockdowns and searches conducted a year and have nothing to do with “alleged” strikes, thus forcing this story into a media blackout.

According to Texas law, inmate workers are not required compensation for their labor. The fact that work for able-bodied inmates is required under threat of punishment reveals itself as modern day slavery. Add to this the all too real images of armed guards, some on horseback, and incarcerated workers, disproportionately people of color, in the Texas heat on prison farms picking everything from vegetables to, in a throwback to the olden days of classic American slavery, cotton. And prisoners aren’t just saying that these conditions resemble slavery or are a resurrection of such practices but are in fact a direct continuation of pre-Civil War slavery. Even the 13th amendment said to abolish slavery specifically states, “Neither slavery nor involuntary servitude, except as a punishment for crime whereof the party shall have been duly convicted, shall exist within the United States,” thus insuring that prison slavery stayed completely legal. Prisoners are put to work doing laundry or janitorial work, making clothes, mattresses, shoes, garments, brooms, license plates, printed materials, janitorial supplies, soaps, detergents, furniture, textile, and steel products. Texas prisoners grow at least 24 different crops and care for 10,000-head herd of cattle. They also run pork and beef slaughterhouses and a vegetable cannery. Texas Correctional Industries forces inmates to make a variety of products which are sold to public schools, hospitals, and government agencies including police departments, “from hand soap to bed sheets, from raising livestock to making iron toilets and portable buildings.” Not only does the company not pay workers, little if any of the money made by these slave labor using corporations goes back towards the operating costs of the prison which essentially means it doesn’t even lower the taxes currently forcibly taken from taxpayers who are carrying the burden of paying for the daily expenses of this corporate slavery scheme. And with overpriced phone calls and a statewide inmate copay of $100 for any medical services, inmates are having to rely on outside help or go without. Even in prisons that do pay workers a few cents an hour, prisoners have to save up for months, even years, to cover basic expenses.

The striking prisoners have issued five demands: 1) compensation for their labor in the form of payment and accrued Good/Work Time, applied retroactively, as well as usage of a “presumptive parole system” which requires inmates to be released at their earliest possible release date, 2) the repeal of the $100 medical copay, 3) the right to be appointed an attorney on habeas corpus cases, 4) the establishment of an independent TOCJ Oversight Committee to review grievances, and 5) humane living conditions and treatment including access to quality food and water, installation of air conditioning, repairs to cracks and leaks in roofs, extermination of roaches and other pest infestations, access to adequate medical care, better access to vocational and educational resources, alleviation of overcrowding, an end to prisoner verbal, physical, and sexual harassment, and the reduction in the use of solitary confinement. Currently, approximately 7000 prisoners are subjected to solitary confinement at any given moment in Texas with some staying in solitary for upwards of 20 years.

One mother of an inmate whose son’s prison is on lockdown showed her support saying, “My son and others are literally sitting down to say, ‘Stop killing us. Stop enslaving us. We are human. This has got to stop, I think the strike should spread. I believe prisoners and families together have the power to collapse this system.”

And that spread is happening with Alabama inmates going strike this past May Day. Ohio, Virginia, Mississippi, and Florida have also joined the effort and many prisoners across the US are now calling for a series of coordinated strikes to take place on September 9th, the 45th anniversary of the Attica prison riot. For information on how to help please contact IWW Incarcerated Workers Organizing Committee at iwoc@riseup.net or 816-866-3808.