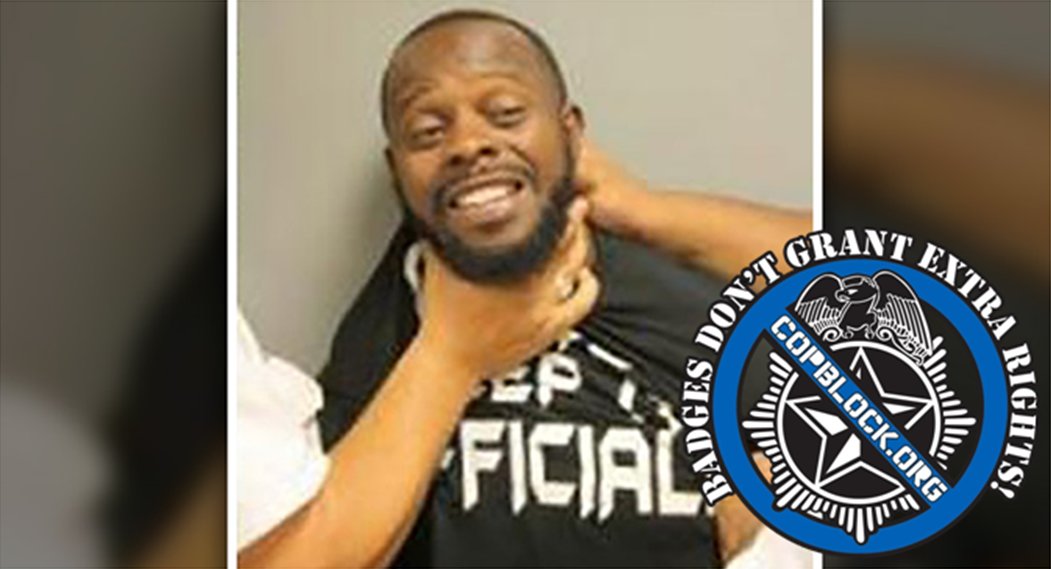 A Texas man is alleging in a federal lawsuit that Harris County jailers choked him for a period of 30 seconds because he decided to smile during a booking photo.

According to the lawsuit, 38-year-old Christopher Johnson was arrested on July 25 under suspicion of driving drunk on his motorcycle before he was taken to the Harris County jail where guards proceeded to take several booking photos of him.

Johnson says in the suit that when a guard told him to stop smiling and assume a more serious pose, he replied by saying, “this is how I always take my pictures… I’m going to beat this case. Why wouldn’t I smile?”

One guard then replied, “we gon’ to make you stop smiling,” and then retrieved another jailer, the lawsuit says, before the two placed a hand on each side of Johnson’s neck and choked him for at least a half of a minute.

A photo produced in the lawsuit appears to confirm Johnson’s claim. It shows him pinned against a wall with one hand wrapped around the front of his neck while another has ahold of the back of his neck. Despite this, he is seen still smiling in the photo.

After the assault, Johnson asked the jailers for medical treatment because his throat hurt, the lawsuit says, but was refused and told instead to “sit down and shut up.”

The suit is seeking unspecified damages from Harris County, the deputy who arrested Johnson, and the two jailers – and additionally claims that other employees at the jail witnessed the assault, but did nothing to stop it. It says Johnson’s civil and constitutional rights were violated in the incident.

Harris County officials have not commented on the lawsuit expect to say that they have received it and are reviewing it. It was filed in U.S. District Court for the Southern District of Texas on Wednesday.

“Our office takes allegations of this type seriously,” Assistant Attorney for Harris County, Robert Soard said. “We will respond to the allegations at the appropriate time.”

The lawsuit comes on the heels of an another suit filed just two weeks ago that also claims Harris County jailers choked a man while he was being photographed. the son of a former deputy constable, Michael Alaniz, 28, said in that federal excessive-force claim that jailers beat him unconscious after he was arrested on a minor trespassing charge.

Alaniz said the beating occurred because he objected to being strip-searched publicly in an area where he could be seen by both male and female inmates. He said he suffered a concussion and a broken nose but was denied medical treatment for more than a day.

Johnson is set to begin trail for his driving while intoxicated charge on June 27. A Harris County Sheriff’s Department spokesperson said the department does not have a policy against smiling during booking photos.