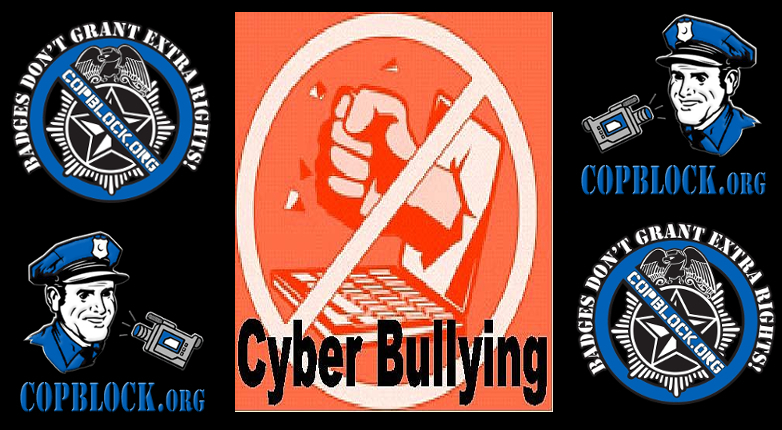 The following post was shared with the CopBlock Network anonymously, via the CopBlock.org Submissions Page. It details an incident where G Philip Rossman,an officer from the Indianapolis Metropolitan Police Department, decided to publicly post a photo of a citizen’s car, inviting harassment of that citizen based on a bumper sticker he didn’t like within the post.

Subsequently, Sgt. Matt Morgan, Officer Madeline Lathamer, and Officer Mike Wilson, who all also work for the IMPD, gladly accepted that invitation and began bullying the owner of that vehicle. That bullying included posting information illegally obtained, via an inappropriate police background search.

BTW, Officer Wilson a former “officer of the year” hasn’t limited his bullying to the internets. He recently received quite a bit of attention for an incident in September in which he was caught on video assaulting and then wrongfully arresting a man at an Indianapolis hotel. Of course, that’s the bigger issue when it’s a group of Heroes cyber-bullying people. More so than anyone, they have the ability to take those threats beyond the internets and out into the real world.

(Note: If you ever have an issue involving inappropriate, threatening, and/or harassing conduct by police employees be sure to take screenshots of the posts so they don’t get deleted and be sure to send those screenshots in with your submission. We are more than happy to expose bullies for what they truly are.)

On June 3rd, 2016, G Phillip Rossman (aka – G Phil Corvette on FB) of the Indianapolis Metropolitan Police Department violated his IDACS user agreement. He also committed a federal violation by posting confidential information, more specifically, a taxpayer’s name and personal information in a very public online post on Facebook. This information was ran through NCIC and posted online by a number of additional officers.

The incident began when Officer G Phillip Rossman took a photo of this subject’s vehicle, their license plate, and the bumper stickers displayed on the rear bumper. He took this photo while stopped at a red light at the intersection at Sheek Road and Main Street in Greenwood, Indiana. Officer Rossman (who at the time of the photograph was in his personal vehicle) then chose to post this picture to his online Facebook account under the name of G Phil Corvette.

He posted this photo to where any member of the public could view and have access to it. In his post, Officer Rossman comments and encourages other officers to specifically target this tax payer’s vehicle, as well as the individual driving it. In the photo the subjects license plate was clearly visible and once again, this post was made public for anyone to see and have access to.

Along with this post, there were additional inappropriate and slanderous comments made by several IMPD officers. Those officers include Mike “Marine” Wilson and Madeline Diaz Lathamer.

This is extremely inappropriate and even unlawful behavior. It reflects poorly on the department as a whole when officers engage in such misconduct and abuse of power. Officer Mike Wilson has violated not only his IDACS user agreement, but has committed a federal violation by posting confidential NCIC information online for the public to see. (see sections 6.3/6.4.3 IDACS user agreement and title 28 in regards to NCIC) He has also committed slander and defamation of character on the driver of the vehicle in which Officer Rossman profiled and targeted.

IMPD officer Madeline Diaz Lathamer also made inappropriate comments in this public post. More specifically she wrote “Oh the fun that could be had without one.” The driver of the vehicle targeted was found to be a law-abiding citizen and a retired police officer who displayed bumper stickers that spoke out against government and police corruption. What was displayed on the vehicle was protected by the First Amendment. The vehicle targeted is deemed “personal property” and it is owned by the driver. What the owner of this vehicle chooses to put on their vehicle and what they choose to display is their right as a taxpayer and a US citizen.

Officers Rossman, Wilson, and Lathamer failed to realize that targeting and profiling specifically based upon something that is displayed and that is covered under the First Amendment is highly illegal. As an American, we have the right to express our feelings and concerns towards government corruption and even assemble in peaceful demonstration if we choose to. No one should be targeted by any police officer because of that. And it most certainly does not give any officer the right to post personal identifying information publicly.

Also involved in this incident was supervisor Matt Morgan of IMPD. As a supervisor, Sgt. Morgan has a responsibility to report issues of misconduct involving another officer. Rather than performing this specific duty, he chose to contribute to the online posts. Upon receiving a word that the owner of the vehicle had intentions of filing a formal complaint to IMPD internal affairs, Sergeant Morgan deleted his online comments. Screenshots of his comments were obtained prior to this deletion. Sergeant Morgan through his own words, “prides himself on getting people stirred up on here.” This is not how a supervisor should present himself to other officers or members of the public.

Sergeant Morgan is a representative of IMPD both on and off duty and he knew that the photograph posted by Officer Rossman was inappropriate. He was also aware of the fact that police resources and law enforcement programs were misused in order to run the license plate in the photo. Yet, rather than reporting this type of behavior and misconduct, he chose to condone and be part of it by contributing in the comment section. Sgt. Morgan has neglected his duties as a supervisor and should be held accountable for his actions and misconduct.

Since this inappropriate post has been made by Officer Rosman, the driver/owner of this vehicle has not only received hateful text messages from former coworkers, but family members have also received hateful and threatening messages on their Facebook accounts. These threatening messages sent to family members have expressed that “when you mess with this family, meaning “the police family”, you mess with all of them.” The owner/driver’s mother was also told in an online message that she needs to “watch her back.” Another message said that they “hoped their mother was a good driver.”

There is absolutely no excuse for this. Note that the owner/driver’s mother is an elderly woman, she enjoys her time on social media and Facebook. It is a way for her to communicate with her former classmates, as well as family members. Officer Rossman clearly doesn’t understand the Constitution and that officers can and will be held civilly liable when these rights are violated.

Officer Rossman has placed himself, other officers, and his department; the IMPD in a position of civil liability. This is a matter where disciplinary action absolutely needs to be taken. What Rossman and Wilson and the number of additional officers who unlawfully ran this information have done falls along the lines of conduct unbecoming of an officer, misuse of equipment, and official misconduct.

An investigation into the violations of NCIC and IDACS was requested. On June 8, 2016, the Indiana State police IDACS division was contacted. Consequently, the Indiana State police initiated an audit of the driver’s license plate. The audit will determine which and how many officers have unlawfully run the victim’s plate based upon the photograph that was posted by Rossman online. In regards to exposing this type of misconduct and corruption, Officer Rossman’s victim has also considered contacting media, as well. It is this type of misconduct, inappropriate behavior, and abuse of power that the public needs to be made aware of.

What these officers have done and this type of profiling is yet another reason why the the public does not trust their law-enforcement officers. This will be addressed accordingly and for those who abused their law enforcement powers by running this confidential information and posting it for the public to see online, other complaints and civil litigation will come from this. The Indiana State Police, IDACS/NCIC, and IMPD internal affairs have all been notified and all comments posted have been retained and provided as evidence against the officers involved. (Mike “Marine” Wilson – Facebook name and account)like a coward, chose to delete his comments once word had spread that formal complaints were being filed and an internal audit was being conducted.

Sadly, it’s the good officers and even the family members who feel the strain of other officer’s misconduct. Undoubtedly , these officers need to be disciplined for their misconduct and what should be deemed as a criminal act against a citizen. This is a form of harassment and even profiling. It is important that the public knows and is aware that when they visit the city of Indianapolis, these are the type of officers they may encounter. Never be afraid to report police misconduct. They need to be held accountable for their wrongful acts just like any other citizen would.