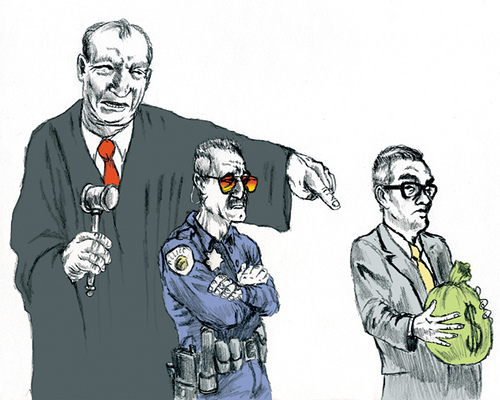 After a series of FOIA (Freedom Of Information Act) requests, AL.com learned of the hefty legal fees Madison, Alabama spent to defend a police chief. Police Chief Larry Muncey, found guilty of contempt by a US district judge, was fined $2500 and placed on “indefinite” administrative leave. According to the outlet, Madison officials, including its mayor, are remaining superbly tight lipped on any developments of the case.

The SNAFU erupted in February 2015, with Madison officers responding to reports of a “suspicious man” walking the block. Officer Eric Parker and an unnamed trainee ultimately stopped Indian citizen Sureshbahi Patel, walking outside his son’s home. At some point, Parker reputedly placed a leg in front of Patel’s, who didn’t speak English, slamming him on concrete. Patel was injured as a result, requiring spinal surgery to recover, AL reports.

Seven days later, with the case garnering international attention, Madison PD’s hierarchy mobilized against it’s own. After Parker’s resignation was recommended by Chief Muncey, he was arrested for misdemeanor assault. The arrest warrant, AL reports, was signed by Madison PD Captain Terrell Cook. All this climaxed when the Department of Justice got involved, filing civil rights charges and launching an inquiry. “There’s really no explanation for it”, says Robert Tuten, Officer Parker’s attorney, “other than they wanted (Parker) gone.”

During the first federal trial that September, Judge Madeline Haikala launched further inquiry into whether Chief Muncey and Captain Cook attempted to influence officer testimony in the Parker case. Those officers, AL reports, supported Parker, though who they were and where they stand now remains unknown. While sluggish to provide further details, Madison voted unanimously to pay for legal representation for officers investigated by Judge Haikala.

Defense attorney Larry Barclay, assigned to Muncey, was paid $36,076 by Madison, according to city records obtained via FOIA. Ironically, that’s about what Officer Parker is paid while on leave, at $36,901. Another $17,300 was directed to attorney Brian White in Captain Cook’s defense, and $2,338 for one Sgt. Anderson. Anderson’s defense fund was spent early on, and his case was later dropped.

“We decided to pay those because we were basically protecting the city”, says Councilman Mike Potter. Potter was one of few city officials willing to speak on the probe, as well as funds used to defend Madison blue. Eventually, even though Parker was acquitted by Haikala, his chief and captain still required representation.

Whereas Cook was also acquitted Muncey was found guilty of contempt. Muncey reputedly emailed witnesses–even calling one to his office privately to discuss testimony. According to AL, he went as far as to send Sgt. Anderson to survey the courthouse.

Muncey vouched for the department, emphasizing his obligation to avoid city lawsuits by ensuring officers don’t use force unnecessarily. Despite his testimony before a judge, several other officers stated Parker’s actions were within policy. The case left Parker on paid leave, Muncey on indefinite administrative leave, and an ongoing lawsuit by Patel against Parker in it’s wake.

Although Muncey filed an appeal, AL reports, city officials are unsure whether they’ll pay off those as well.  Despite the relative lack of information regarding the case, DOJ certainly isn’t leaving the city any time soon.  .