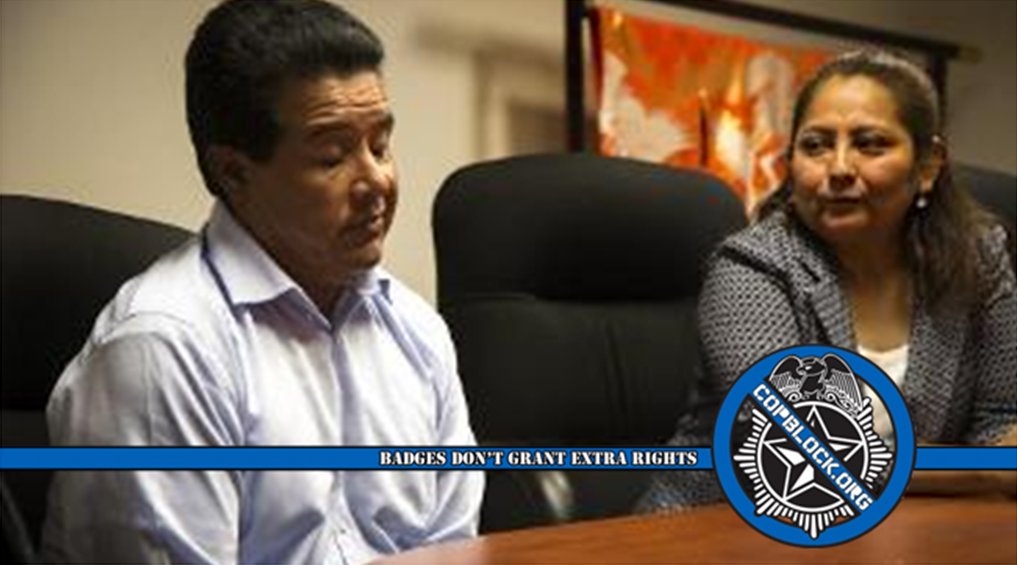 A California man has received a $4.6 million lawsuit settlement for an encounter with an Inglewood police officer that left him with a bullet wound to the head and long-term brain damage.

Officer Landon Poirier was attempting to pull over 46-year-old Juan Jose Palma on October 7, 2012 at around 1:30 a.m. on 103rd Street. Poirier said Palma refused to immediately stop after running a stop sign and crept at slow speed for several blocks after being blue lighted.

When Palma finally did bring his Ford Explorer to a halt, Poirier jumped out of his police cruiser with his gun drawn. He told investigators that Palma refused to comply with commands to show his hands before reaching behind him and raising a “long black and silver object” thought to be a shotgun.

Poirier fired a single shot into the car striking Palma in his left temple. The incident was captured by a repair shop security camera from a distance in a 15 second clip, but that footage has not been released to the public. No body or dashboard cameras were present at the scene.

What actually occurred has been the subject of heated discussion for more than four years, and Palma and his attorney have asserted that Poirier’s version of events is inaccurate. In an excessive force lawsuit filed against the city of Inglewood, it was claimed that Palma posed no threat to anyone.

Instead of reaching for a weapon, Palma said he was simply reaching for his license and registration. No gun was recovered from his Explorer, though prosecutors did say that a baseball bat was found in the backseat.

Poirier was not charged in connection with the shooting. The District Attorney’s office said the officer “acted to end what he perceived to be an imminent deadly threat” after Palma did not comply with orders in English and Spanish to show his hands.

According to Palma, he can’t remember the gunshot, and still has several blank spaces in his memory. Following the incident, he was unable to speak when he woke up in a hospital bed.

Palma required months of occupational therapy in order to regain the ability to form coherent sentences again, and says he still struggles to speak properly at times. Words form in his brain, he said, but do not seem to make their way out of his mouth.

Palma’s attorney, R. Samuel Paz, has accused the Inglewood police department of failing to properly investigate its officers when they use deadly force.

Former Los Angeles County sheriff’s commander and chairman of strategy development for the National Tactical Officers Association, Sid Heal, called the shooting as “lawful but awful” – but said the size of the settlement indicated the city knew it would lose in court.