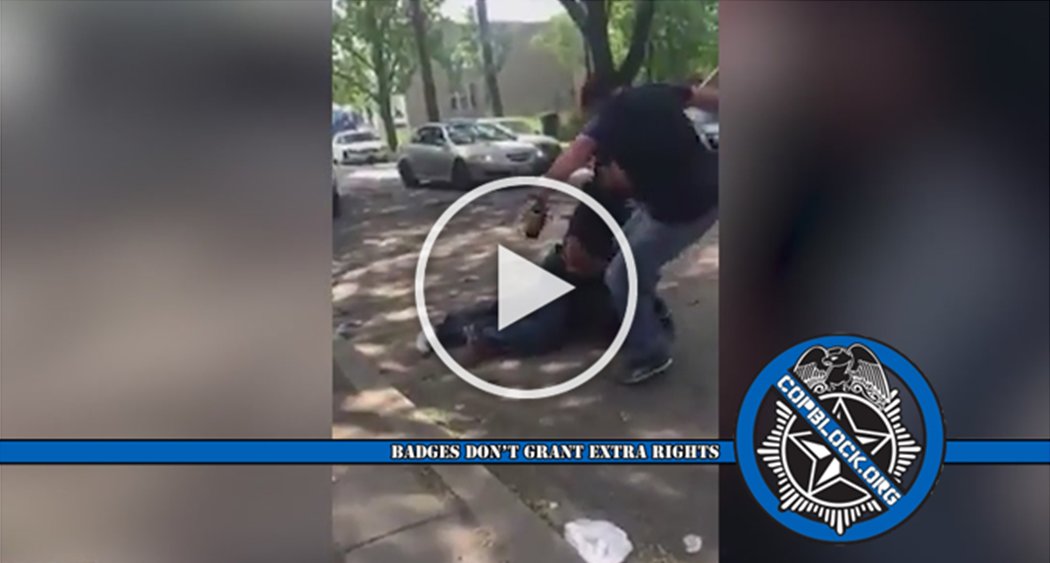 Video has emerged showing a plainclothes Chicago police officer stomping a man’s head while a second plainclothes cop tries to restrain him during an apparent drug investigation.

Originally posted to Facebook on Monday, the video shows one of the officers attempting to arrest 24-year-old Shaquille O’Neil in the 3900 block of West Grenshaw. According to witnesses, O’Neil was running from the cop and then resisted before being taken to the ground.

The footage shows the officer wrestling with O’Neil on the street before the other cop arrives and calls for backup as a crowd gathers and moves closer to the action. After about one minute into the struggle, the second officer can clearly be seen stomping on the man’s head.

The Chicago Fire Department said O’Neil was knocked unconscious as a result of the stomp and required being taken to Mount Sinai Hospital for treatment. He was released on Tuesday.

Its not exactly clear how the narcotics investigation lead to the confrontation. Spokespeople for the Chicago police department have only said that O’Neil was arrested because of the incident and has pending charges.

They did confirm that the Independent Police Review Authority has launched an investigation into the video and that the department has stripped the offending officer of his police powers and placed him on desk duty.

“After careful consideration and reviewing the video footage, Superintendent Johnson has decided to relieve one of the officers… of his police powers while IPRA investigates the case,” police spokesman Anthony Guglielmi said.

“Since his appointment, the Superintendent has stated that accountability begins with him down to the last police officer and that he will tirelessly work to rebuild public trust in the Chicago Police Department.”

After the video of the encounter started making its way around social media, angry protestors marched outside Chicago police headquarters during early morning hours on Tuesday, decrying what they allege is excessive force.

“In the situation, he chose to stomp a young man’s face and knock him unconscious,” community activist, Minister Jedidiah Brown said. “Kicking him in the face was uncalled for, and it was a disgusting act, and I’m glad that that police officer has been stripped of his authority.”